West Ham midfielder Yui Hasegawa set up the opener before hitting a double as two-time defending champions Japan cruised to a 5-0 win over Myanmar on Friday in their Group C opener of the women's Asian Cup in India.

At the tournament doubling as the continent's qualifier for the 2023 World Cup, to be jointly hosted by Australia and New Zealand, Nadeshiko Japan made a comfortable start to hand manager Futoshi Ikeda his first win since taking charge last October. 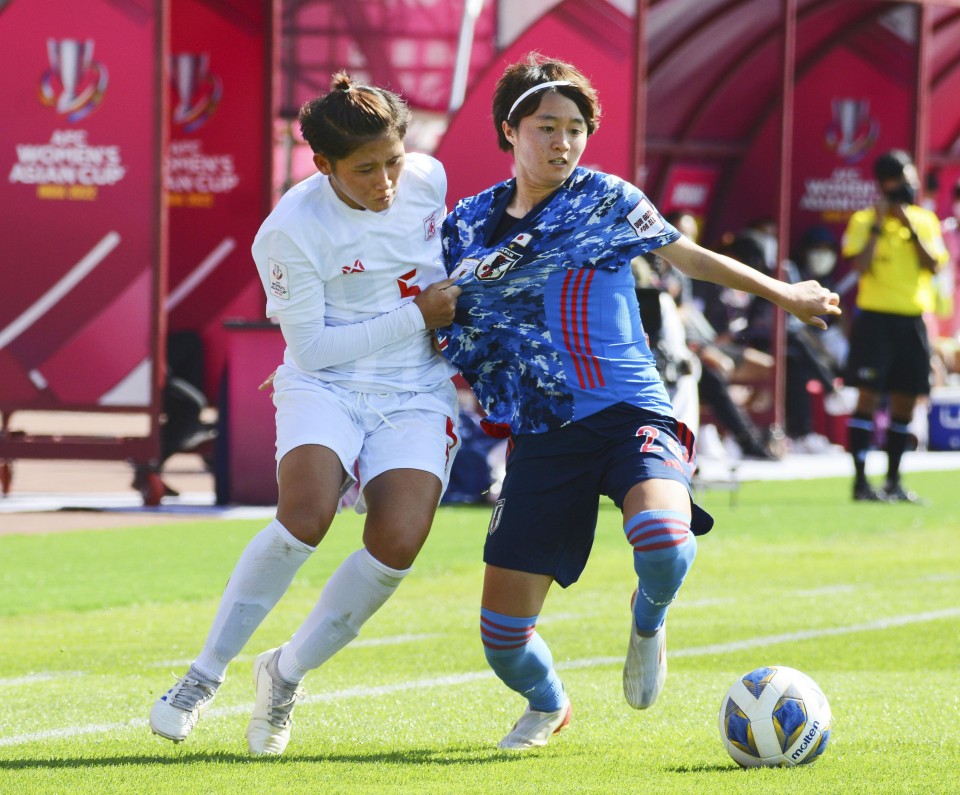 Supplied photo shows Hinata Miyazawa (R) of Japan vying for the ball during the Group C opener of the women's Asian Cup against Myanmar in Pune, India, on Jan. 21, 2022. (Copyright AFC)(Kyodo)

Sitting 13th in the FIFA ranking, Japan were limited to a single goal from forward Riko Ueki in the first half but they were never troubled against 47th-ranked Myanmar at Shree Shiv Chhatrapati Sports Complex in Pune.

"I'm glad we've managed to get the three points in the opening match and to see the players' work rate under these hot conditions," Ikeda said. "We could have converted our chances a bit more and we also need to get our conditions right with two days' rest ahead of the next game."

Following a 2-0 defeat to Iceland and a goalless draw against the Netherlands in November friendlies, Ikeda finally had a goal from his side when forward Riko Ueki scored a sumptuous diving header from Hasegawa's cross from the right in the 22nd minute.

Japan hit the bar twice through a Mina Tanaka header and a Hasegawa volley on either side of the opener but they did turn their domination into goals in the second half, with Hasegawa oozing her class.

Her first goal arrived in the 47th minute as Hinata Miyazawa's pass was flicked on by Ueki into her path and she made no mistake to steer past the keeper.

Substitute Hikaru Naomoto buried a free kick off the bar from the edge of the box five minutes later and Yui Narumiya, another player off the bench, scored a well-placed effort from a similar range in the 70th minute.

Hasegawa completed the scoring in the 92nd minute, running behind the opposition defense with a good first touch as she received a pass from Jun Endo before chipping the ball over the keeper.

Japan will face 32nd-ranked Vietnam on Monday and 18th-ranked South Korea on Thursday in Group C.