A group of six people filed a damages suit against the operator of the Fukushima nuclear plant on Thursday, seeking compensation over claims that they developed thyroid cancer after radiation exposure due to the 2011 disaster.

The lawsuit was filed with the Tokyo District Court by people aged between 6 and 16 who were living in Fukushima Prefecture when the nuclear accident at the Fukushima Daiichi plant occurred. They are demanding Tokyo Electric Power Company Holdings Inc. pay a total of 616 million yen ($5.3 million) in damages. 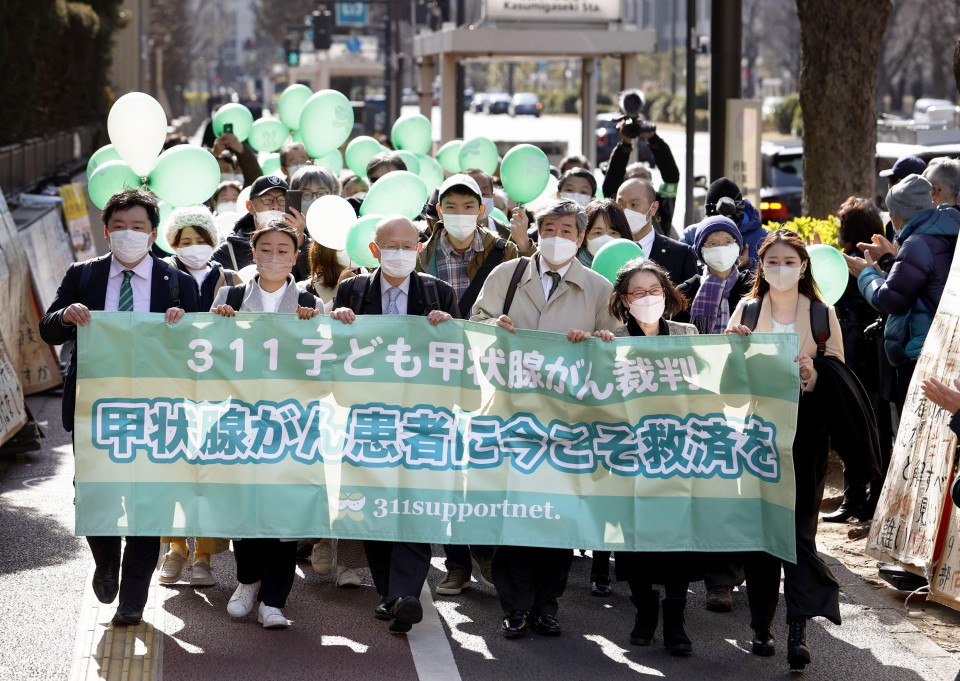 Lawyers for the plaintiffs who filed a damages suit against Tokyo Electric Power Company Holdings Inc. over thyroid cancer caused by exposure to radiation from the 2011 disaster walk in front of the Tokyo District Court on Jan. 27, 2022. (Kyodo)

An expert panel of the Fukushima prefectural government has said there is no causal relationship between thyroid cancer and exposure to radiation due to the nuclear disaster. But whether there is such a correlation is likely to be the focus of the lawsuit.

The plaintiffs were all diagnosed with thyroid cancer between the ages of 12 and 18.

Two of the six have had one side of their thyroid surgically removed, while the other four had it taken out entirely due to recurrence of malignancy. In some it has metastasized to the lungs or other parts of the body and they have undergone radiotherapy.

One of the plaintiffs, a woman in her 20s living in the Tokyo metropolitan area, said in a press conference, "I have been afraid to tell anyone about my cancer for fear of discrimination. I want to change this situation by raising my voice."

The six are now aged between 17 and 27 and live in Tokyo, Fukushima and Kanagawa prefectures, respectively.

TEPCO said they will respond to the case in good faith after studying the details of their claims.

On March 11, 2011, a tsunami engulfed the six-reactor nuclear power plant located on the Pacific coast, causing core meltdowns at the Nos. 1 to 3 reactors and hydrogen explosions at Nos. 1, 3 and 4 units in the following days, leading to the worst nuclear disaster since the 1986 Chernobyl crisis.

Fukushima Prefecture has conducted thyroid examinations on some 380,000 children aged 18 or below at the time of the incident.

By June 2021, a total of 266 children had been diagnosed with thyroid cancer or suspected of having it.