Yokuzuna Terunofuji survived a close contest against slippery No. 2 maegashira Ura on Wednesday to improve to a perfect 4-0 at the New Year Grand Sumo Tournament.

Bidding for his third straight championship, Terunofuji needed patience and poise on Day 4 against the nimble rank-and-filer, who upset ozeki Takakeisho the previous day. 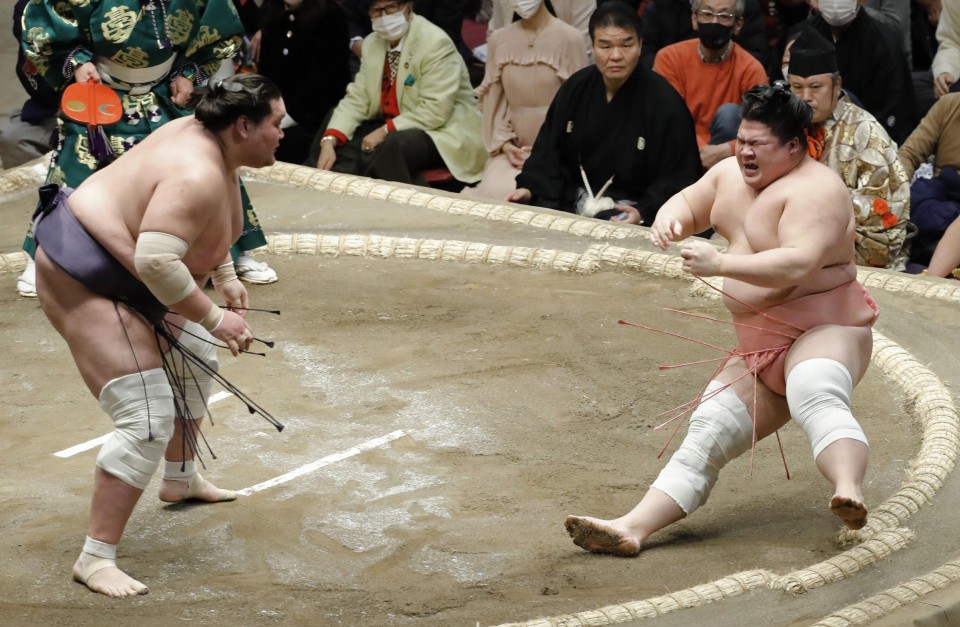 Terunofuji snared Ura (1-3) in an arm lock on his second attempt, but the maegashira snuck out of the hold, knocked the Mongolian-born grand champion off balance and drove him to the edge.

With no margin for error, Terunofuji teetered briefly on one leg, but staved off defeat by managing to bring his left foot down inside the straw.

From there, Terunofuji took the action back to the middle and eventually thrust Ura down to the clay after the maegashira's attempt at a slap-down backfired.

With the victory, the sport's sole grand champion extended his winning streak to 22 consecutive bouts, dating back to last September's grand tournament.

Takakeisho is expected to miss the remainder of the 15-day tournament at Ryogoku Kokugikan after injuring his foot against Ura on Tuesday. He forfeited his Day 4 match against No. 1 Kiribayama (1-3) and leaves the competition with a 1-3 record.

Ozeki Shodai had a lucky escape against winless No. 1 Wakatakakage, improving to 3-1 after judges overturned a victory initially awarded to the maegashira.

Wakatakakage (0-4) was in the ascendancy from the start, yanking Shodai off balance and shoving him toward the straw, but the rising talent put a toe outside the ring as he sent the ozeki over the edge.

Sekiwake Mitakeumi stayed unbeaten at 4-0 after winning a rematch against komusubi Meisei (2-2).

Ringside officials ordered the pair to redo their bout after initially ruling against Meisei for stepping out while throwing Mitakeumi. Upon review, the judges determined both wrestlers exited the ring simultaneously.

Mitakeumi wrapped up the rematch decisively, opening with a hard charge and pushing Meisei straight out.

Sekiwake Takanosho dropped to 2-2 after losing an entertaining bout against No. 3 Endo (2-2).

Endo had Takanosho in trouble early, driving him to the straw bales with a strong grip, but the sekiwake maneuvered his way back into the contest, nearly pulling off a reversal before succumbing to an underarm throw.

No. 6 Abi (4-0) stayed perfect by blowing away No. 9 Chiyonokuni (0-4) and once again looms as a contender after challenging for the title in his top-division return in November.

The former komusubi has shown renewed purpose since serving a three-tournament suspension for breaking coronavirus safety rules in July 2020.

Komusubi Daieisho, champion of last January's tournament, dropped to 1-3 with a push-out loss to towering No. 2 Ichinojo (2-2). Daieisho drove his opponent back to the edge, but Ichinojo executed a reversal to win the battle of former sekiwake.