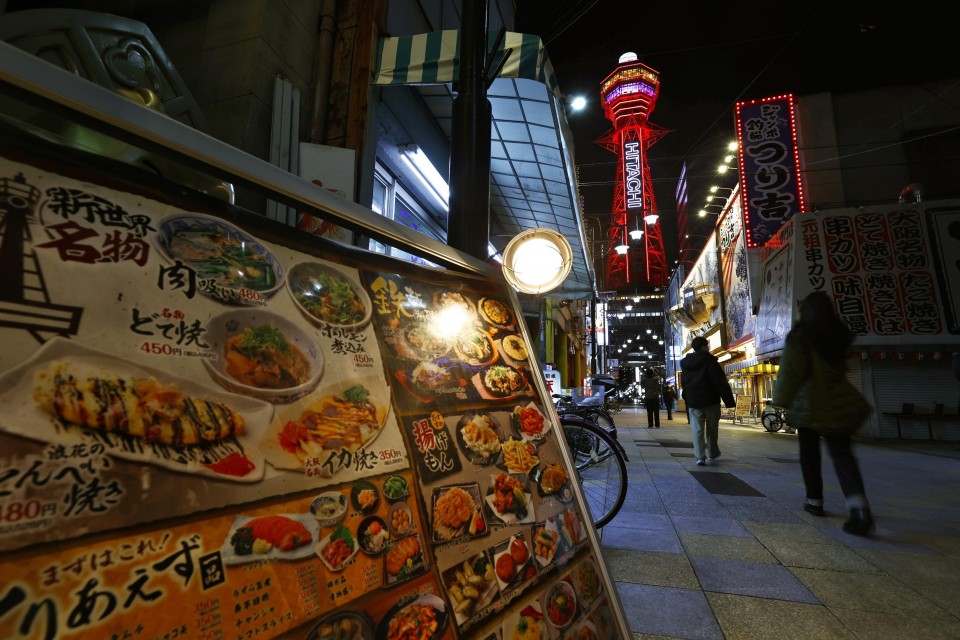 Osaka's landmark Tsutenkaku Tower is lit up in red on Jan. 24, 2022, amid the unabated spread of COVID-19 infections. (Kyodo) ==Kyodo

TOKYO - Japan on Tuesday expanded a COVID-19 quasi-state of emergency to 34 of the nation's 47 prefectures with the addition of 18 more areas, as the country continues to battle record coronavirus infections amid the rapid spread of the Omicron variant.

Effective from Thursday to Feb. 20, the quasi-emergency is intended to reduce the strain on the health care system and prevent a shortage of essential workers that could result from a surge in infections and close contacts.

SEOUL - North Korea on Tuesday fired two suspected cruise missiles from an inland location, a South Korean military official said, following a flurry of weapons tests by Pyongyang since the beginning of this year amid stalled diplomacy with the United States.

South Korea is still assessing what types of missile were fired in the morning, said the official, who spoke on condition of anonymity and declined to provide further details, including how far and high they traveled.

TOKYO - The average unit price of new condominiums in Tokyo and its vicinity in 2021 hit a record high of 62.60 million yen ($550,000), surpassing the previous high recorded in 1990 during an asset-inflated bubble, a research institute said Tuesday.

The price was up 2.9 percent from the previous year in the capital and three neighboring prefectures of Kanagawa, Chiba and Saitama, boosted by the increasing popularity of luxurious properties such as high-rise condos in downtown Tokyo, the Real Estate Economic Institute said.

TOKYO - Corporate executives and labor unions began this year's spring wage negotiations on Tuesday, with the focus on whether companies will move toward hikes as urged by Prime Minister Fumio Kishida amid economic uncertainties caused by the coronavirus pandemic.

Masakazu Tokura, chairman of Japan's most powerful business lobby known as Keidanren, urged companies to "respond proactively in consideration of social expectations," siding with the premier's call for aggressive pay hikes by businesses.

Tencent Holdings Ltd., the Chinese tech giant that owns WeChat, in an official comment the same day denied claims that the account had been hijacked, and said the issue appears to be merely a dispute over account ownership with a little-known Chinese company that now controls it.

TOKYO - A watchdog overseeing foreign technical trainees has urged a Japanese construction company to take necessary measures to prevent abuse of such trainees after a Vietnamese man suffered serious injuries at the hands of Japanese co-workers at the company, Justice Minister Yoshihisa Furukawa said Tuesday.

The Organization for Technical Intern Training has also urged a body that introduced the 41-year-old trainee to the company in Okayama, western Japan to take necessary steps to prevent abuse, Furukawa said. "Human rights violation must never happen," he said.

TOKYO - The Finance Ministry on Tuesday upgraded its overall assessment of Japan's regional economies for the first time in 15 months, saying they are recovering from the fallout of the coronavirus pandemic.

Reflecting recent recoveries in consumer spending and auto output, regional economies "are gradually picking up, although they are still affected by the coronavirus, supply chain disruptions and rising raw material costs," the January report said.