A 17-year-old high school student recently arrested over a knife attack outside the University of Tokyo had at least four liters of flammable liquid with him, investigative sources said Tuesday.

On Saturday morning, two high school students and a 72-year-old man were stabbed in the back in front of a gate to the university's main campus as many people were arriving for nationwide university entrance exams. 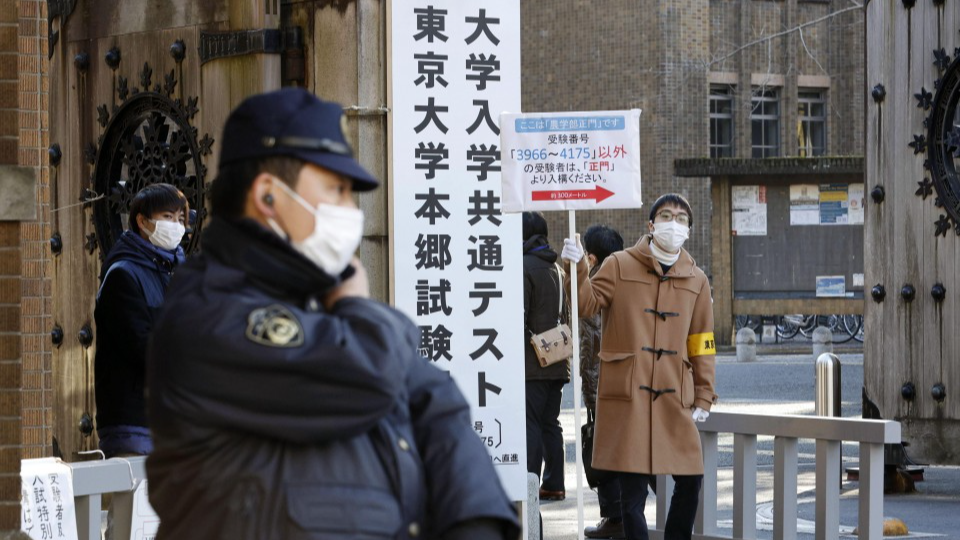 A police officer stands guard just outside the University of Tokyo on Jan. 16, 2022, one of the venues for nationwide university entrance exams, a day after two high school students and a man were wounded in a knife attack that led to the arrest of a teenager on suspicion of attempted murder. (Kyodo) ==Kyodo

While the injuries sustained by the male and female students were not life-threatening, the older man was seriously hurt. The police have arrested the teenager on suspicion of attempted murder.

Suspicious fires were spotted at no less than eight locations inside Todaimae subway station, near the crime scene, according to the sources.

The suspect was also quoted as telling investigators that he unsuccessfully tried to set fire to a backpack that had been moistened with a liquid on a running train, the sources said.

Police have found the backpack on the floor of a train car along with two plastic bottles containing inflammable liquid and surrounded by a pool of liquid.

The police suspect the teenager had prepared the liquid to start a fire in the train and are investigating how he obtained it.

The stabbing is the latest in a series of attacks that targeted random people in public.

An arson case at a mental health clinic in Osaka in mid-December killed 25 people. In October, a man dressed as Batman villain the Joker attacked passengers on a train with a knife, injuring 17 people.

In the most recent case, the attacker, whose name is withheld because he is a minor, is a second-year student at a private high school in Nagoya. He was hoping to attend the University of Tokyo, the most prestigious school in Japan, to become a doctor but was struggling with falling grades lately, the police said.

"I was not doing well in my studies, so I wanted to cause an incident and die," he was quoted as saying.

The attack occurred on the first day of two-day university entrance exams that were sat by more than 530,000 applicants nationwide. The exams were held amid concerns over the rapid spread of the Omicron variant of the coronavirus.

The two high school students visited the university to take the exams from neighboring Chiba Prefecture. The attacker was not acquainted with the three, the police said.