Japan decided Wednesday to place Tokyo and 12 other areas under a coronavirus quasi-state of emergency, with a record 41,487 new infections reported nationwide as the highly transmissible Omicron variant spreads rapidly across the country.

The decision will allow the governors of Tokyo and the dozen other prefectures to ask restaurants and bars to close early and stop or limit the serving of alcohol. The measure will be implemented from Friday to Feb. 13 in an effort to curb what has become the "sixth wave" of COVID-19 infections in Japan. 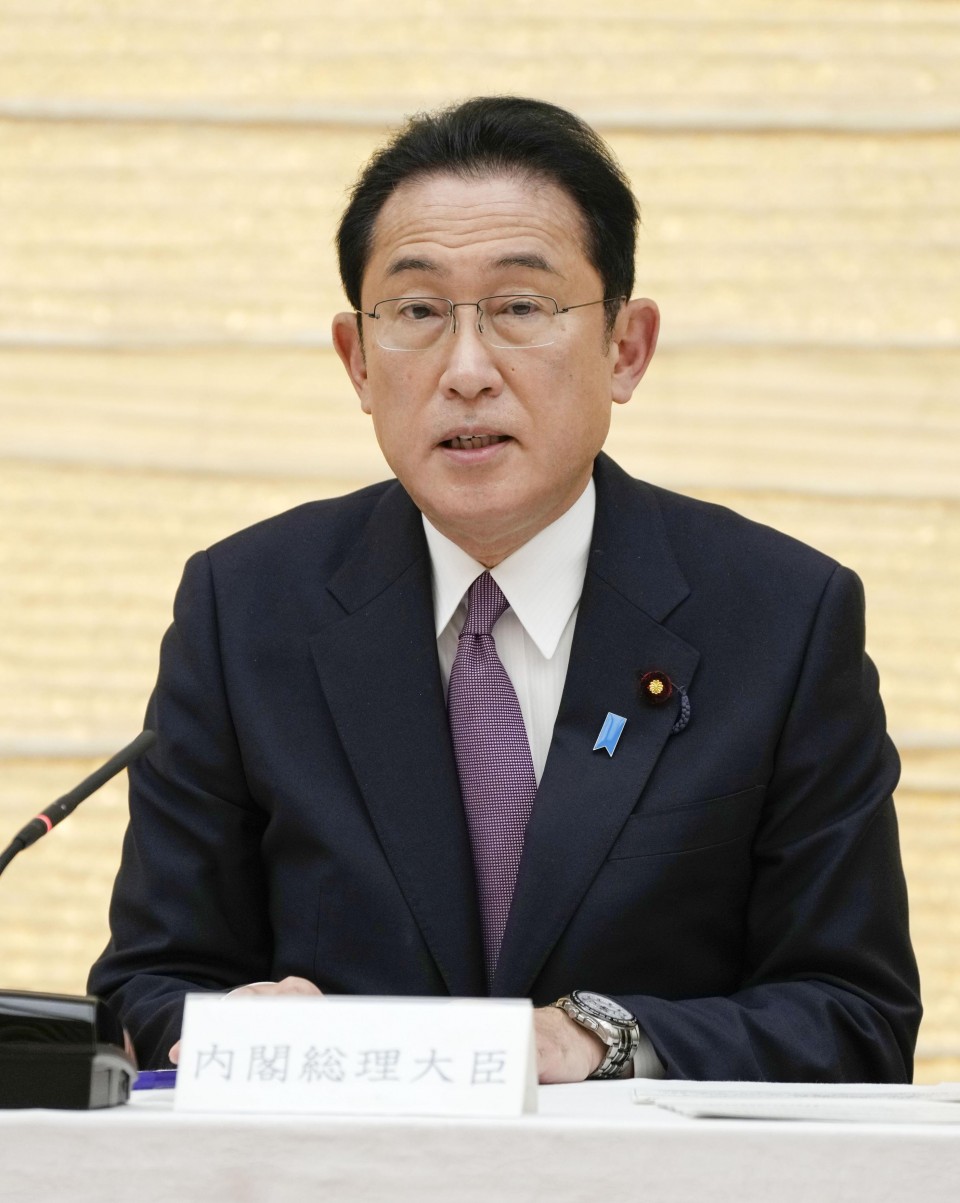 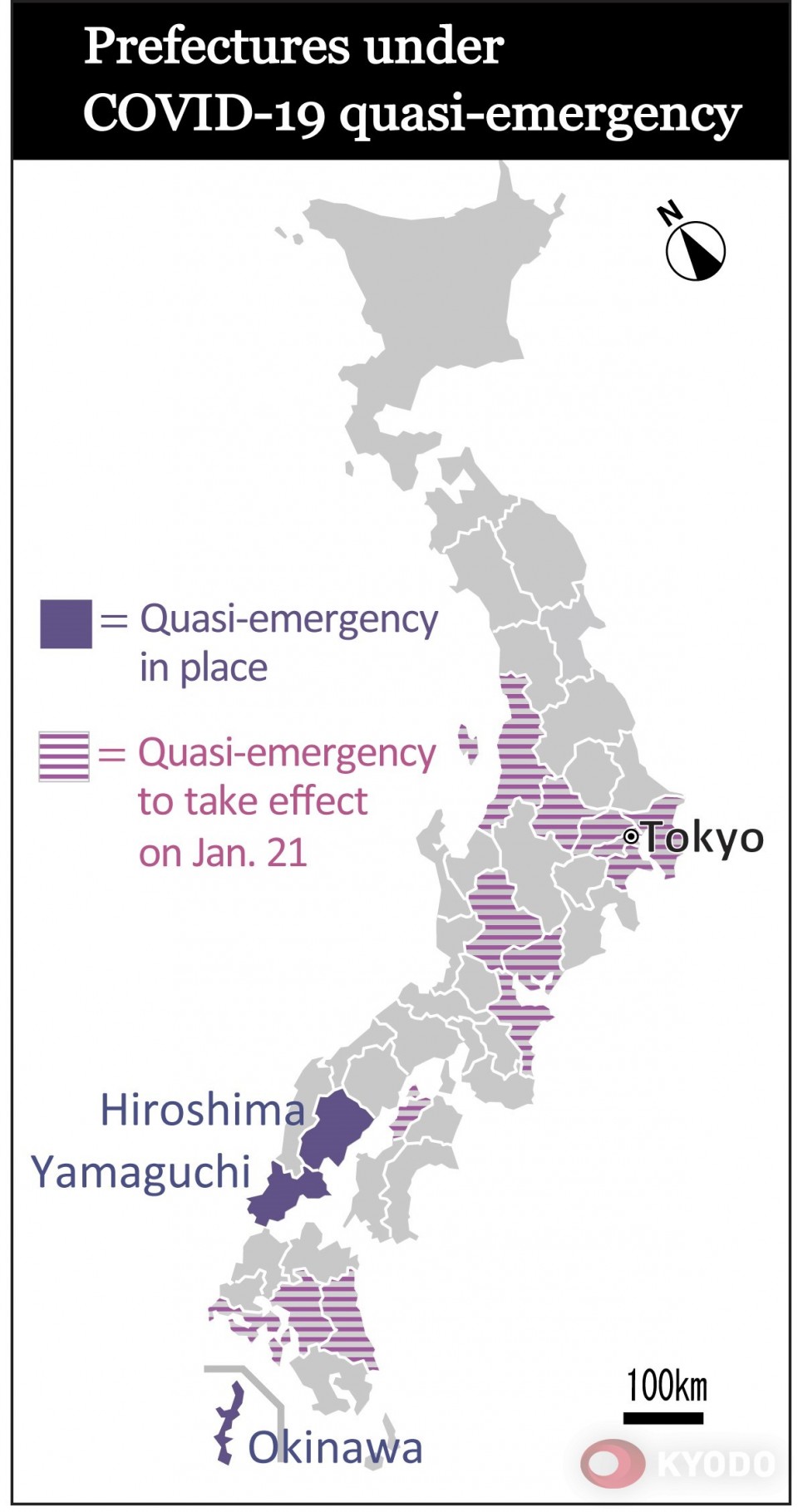 "This has been a fight against an unknown virus, but we hope to overcome this situation by preparing sufficiently without fearing excessively," said Prime Minister Fumio Kishida at a meeting of the government's COVID-19 task force.

Along with Tokyo, which reported a record 7,377 new infections Wednesday, the targeted prefectures include its neighbors Chiba, Saitama and Kanagawa in the metropolitan area. The region saw a full state of emergency lifted about three months ago.

The metropolitan government said Wednesday that while it will request dining establishments to shorten their business hours, it will make the suspension of serving alcohol optional.

Nine other prefectures subject to the new quasi-emergency are Aichi, Gifu and Mie in central Japan, Nagasaki, Kumamoto and Miyazaki in the country's southwest, Kagawa in western Japan, Niigata in north-central Japan and Gunma in eastern Japan.

Fukushima and Shimane prefectures are set to request that the central government impose emergency measures, their respective governors said Wednesday.

Japanese authorities worry hospitals that need to treat patients not admitted due to the virus will be overwhelmed if infections continue to increase at the current pace and affect elderly people and those with underlying health conditions.

Another concern is a shortage of essential workers such as medical staff due to a sharp rise in those designated as close contacts of people who tested positive for COVID-19.

"We need to quickly prevent the spread of infections, given the potential for a major strain on the medical system in the near future," said economic revitalization minister Daishiro Yamagiwa, who is also in charge of the government's coronavirus response. 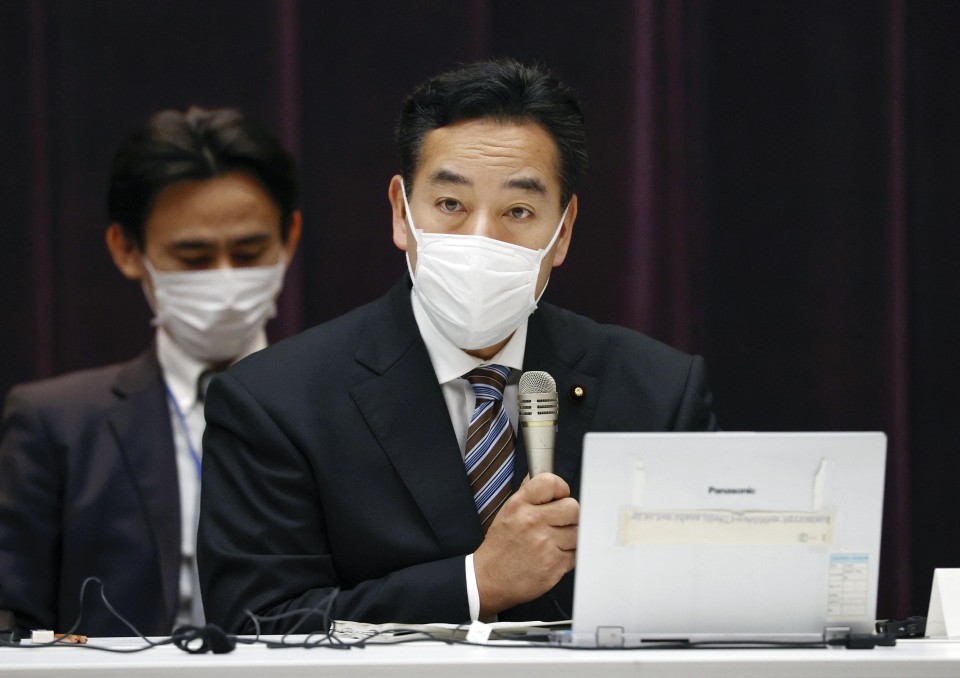 Economic revitalization minister Daishiro Yamagiwa, in charge of the Japanese government's coronavirus response, speaks during an experts meeting in Tokyo on Jan. 19, 2022. (Kyodo)

The government's subcommittee on the COVID-19 response gave the green light to the planned quasi-emergency stretching over roughly three weeks, as Japan's daily count of confirmed infections topped 40,000 for the first time, renewing its all-time high for the second consecutive day.

While Kishida has made the COVID-19 response a top priority since taking office in October, his government now faces the difficult task of striking a balance between imposing anti-virus measures and keeping the economy going, especially as health experts say many people show no or mild symptoms despite Omicron's highly transmissible nature.

Japan has never imposed a lockdown during the pandemic.

Shigeru Omi, the government's top COVID-19 adviser, suggested it is not necessary to halt both social and economic activities but urged people to avoid high-risk situations such as gathering in large numbers and speaking in loud voices.

"I think we don't need to have eateries close if people dine in groups of about four and speak quietly while wearing face masks," said Omi, who heads the subcommittee. 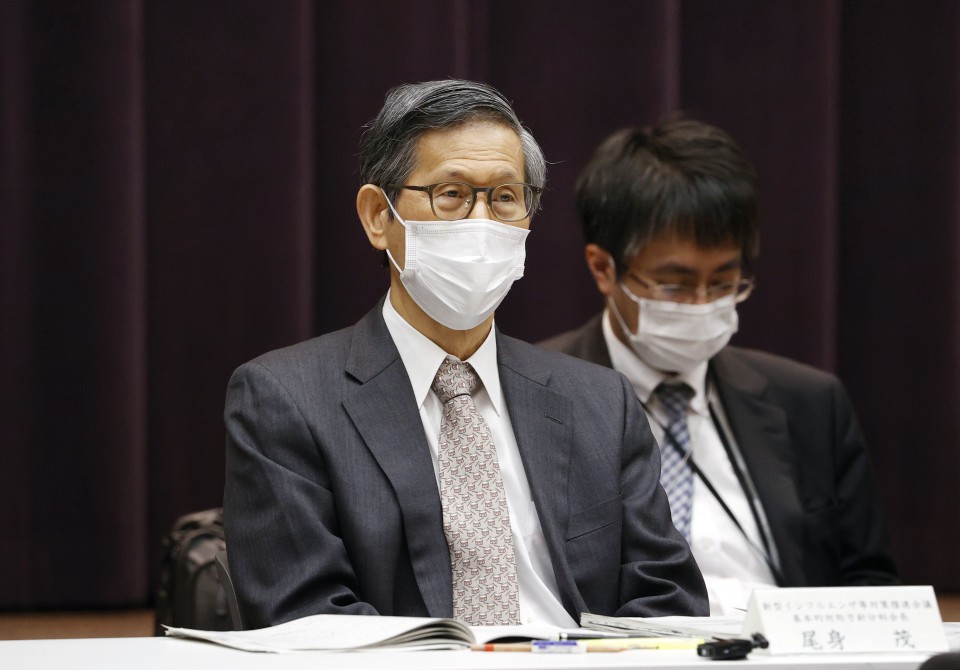 Japan's top COVID-19 adviser Shigeru Omi attends a meeting of the government advisory panel on anti-coronavirus measures in Tokyo on Jan. 19, 2022. The panel endorsed the government's plan to place Tokyo and 12 prefectures under a coronavirus quasi-state of emergency amid the rapid spread of the Omicron variant. (Kyodo) ==Kyodo

Three prefectures have already been placed under a quasi-emergency since early January and the addition of the 13 will mean about a third of the nation's 47 prefectures are subject to stricter curbs.

Under the quasi-emergency, governors can designate specific areas for measures against the virus and make their own decisions on business hours or the serving of alcohol at local eateries.

The government will halt, in principle, the implementation of a program to check whether people visiting places like restaurants have been vaccinated twice or have proof of having tested negative for COVID-19 as a way of reviving economic activity, but still leave some room for governors to implement it on their own.

"We are aware that there are hopes for utilizing the program based on decisions by governors, who best know local situations," Chief Cabinet Secretary Hirokazu Matsuno said.

The governors of Osaka, Kyoto and Hyogo in western Japan affirmed at a virtual meeting on Wednesday that if one of them decides to seek quasi-emergency curbs, they will ask together.

"In light of the current infection situation, we are likely to decide on making a request within this week," Hyogo Gov. Motohiko Saito said.

Matsuno said if the three prefectures ask to be added to the list, the government will swiftly review their requests.