Whether he is studying at a vocational school in Tokyo or doing a part-time job, Lian Ceu always worries about his parents and younger brother in Myanmar who survived but became displaced after his family's house in Chin State was destroyed by the country's military during an air strike last September.

Showing his mobile phone containing a photo of the devastated site in Myanmar's northwest, the 26-year-old ethnic Chin says, "This is not what humans should do. The Tatmadaw takes this kind of action to instill a feeling of terror into people in an attempt to curb protests against the junta."

Lian Ceu's parents and 14-year-old brother are among an estimated 320,900 people who, according to U.N. data, are internally displaced across Myanmar due to clashes and unrest since the military, known as the Tatmadaw, detained civilian leader Aung San Suu Kyi and overthrew her democratically elected government in a coup on Feb. 1, 2021. 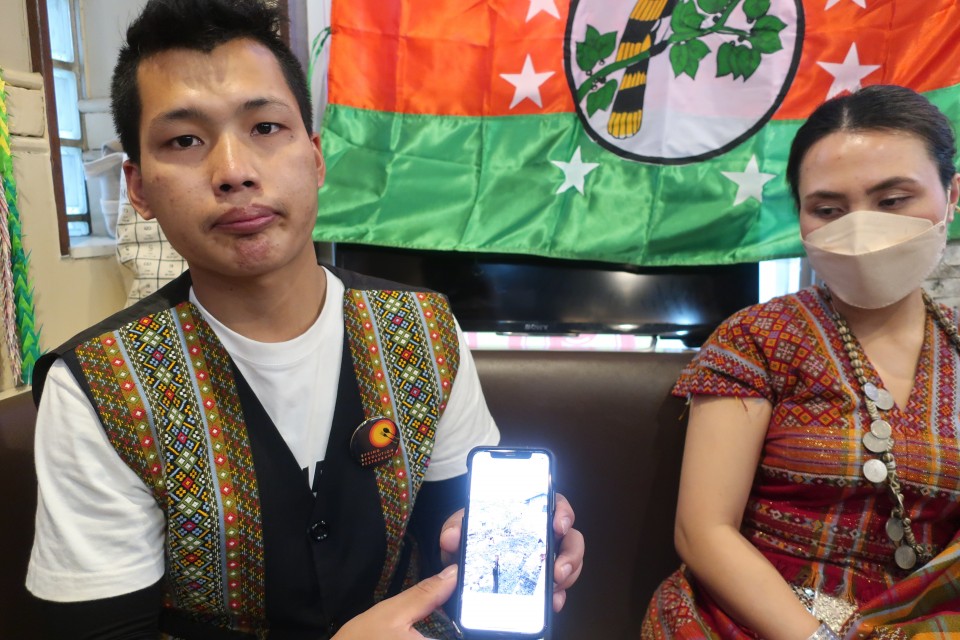 Lian Ceu (L), a Tokyo vocational school student from Myanmar, speaks in an interview on Jan. 9, 2022, at Spring Revolution Restaurant in Tokyo's Ikebukuro district, as Lae Lae Lwin, a restaurant staffer and another Myanmar resident in Japan, looks on. (Kyodo)

Of the total, 132,200 are in Chin and two neighboring regions, reflecting hostilities between the military and the Chinland Defense Force, an armed group of anti-coup protestors, which, together with other resistance forces, the junta labels as "terrorists" for undermining peace and stability in the country.

Critics and independent analysts, however, blame the junta for causing a humanitarian crisis in Myanmar, citing a U.N. estimate that the number of people requiring aid such as food and medical supplies will jump to 14.4 million -- or about a quarter of the country's population -- in 2022 from 1 million before the coup.

The junta, led by army chief Min Aung Hlaing, has also killed about 1,500 peaceful demonstrators and other citizens, according to the Assistance Association for Political Prisoners, a local monitoring group.

"Every day, I'm worried that security forces may detain -- or even kill -- my parents and brother, claiming they have ties with the CDF even though they do not," Lian Ceu said in an interview in Tokyo. "I won't say where they are now but I'm concerned the Tatmadaw may conduct another air strike over them."

He was speaking on Jan. 9 at Spring Revolution Restaurant in the Ikebukuro commercial district. A group of pro-democracy Myanmar residents in Japan opened the eatery last June with the aim of contributing to the cause of restoring freedom and democracy back home.

On that day, the restaurant served a buffet featuring ethnic Chin food, with the proceeds, including donations, to be used to help displaced people in the region, said Lae Lae Lwin, a staffer who also works as a nurse at a Tokyo hospital. 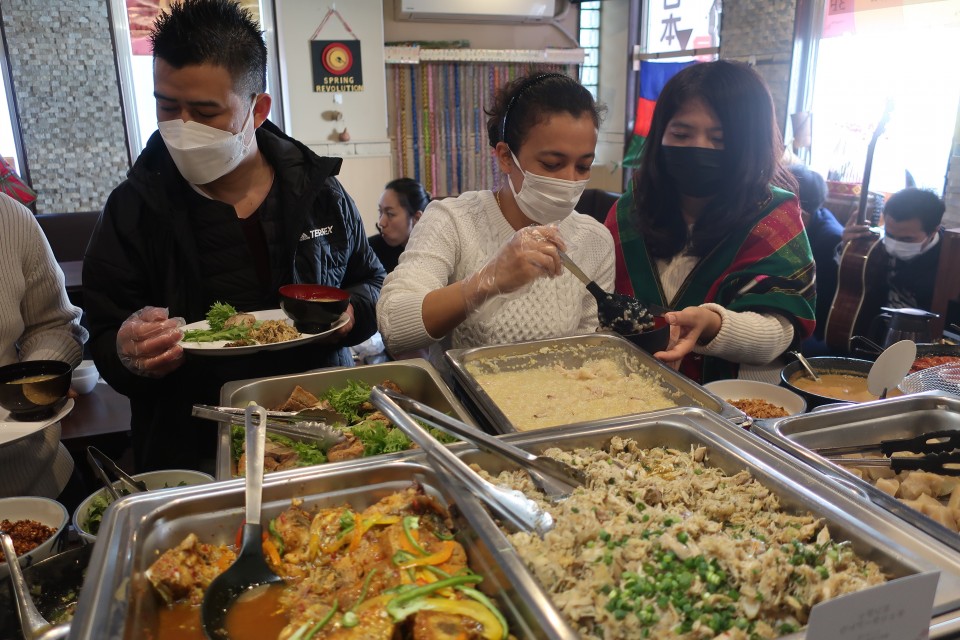 She and other restaurant staff also want Japanese customers to know what is happening in Myanmar, including the killing of nonviolent demonstrators, women and children, and seek effective measures from Japan to pressure the military to reverse course.

"The CDF is not a terrorist group as the junta claims," Lae Lae Lwin, 31, said. "It involves students, doctors and nurses and other citizens, and members are fighting for peace, freedom, democracy and human rights."

She was surprised -- and very much encouraged -- that one Japanese customer donated 100,000 yen ($870) to support the restaurant's mission. The eatery is planning another event featuring local dishes of the Karen ethnic group in Kayin State, eastern Myanmar, on Feb. 13.

"Myanmar is a multiethnic country and decades of ethnic conflicts have made it difficult to create a genuinely inclusive federal state," she said. "But we are now having a unique opportunity since the majority Bamar and ethnic minorities have joined forces in the fight against the junta."

Led by Duwa Lashi La, an ethnic Kachin lawyer and former political leader of Kachin State, northern Myanmar, the NUG is demanding that the junta halt violence, release Suu Kyi and other detainees, and restore the democratically elected government.

Suu Kyi has been convicted on several charges, including incitement, a move her supporters and independent analysts say the junta intends to use as an excuse to legitimize the military takeover of the government and prevent the Nobel Peace Prize laureate from returning to politics.

Lae Lae Lwin and Lian Ceu are urging the Japanese government to recognize the NUG as Myanmar's legitimate governing body and go beyond the suspension of new official development assistance projects, such as the withdrawal of all non-humanitarian aid and imposing sanctions on senior generals and the companies they control.

While applying pressure on the junta in concert with the United States and other countries, Japan -- which unlike Western powers has ties with both the military and the NUG -- is seeking to influence the generals without publicly humiliating them.

Such a strategy, however, has not been effective in addressing the crisis. No longer wanting to see violence and bloodshed in Myanmar, a country also hard hit by the coronavirus pandemic, Lae Lae Lwin and Lian Ceu called on Prime Minister Fumio Kishida to side with Myanmar citizens and the NUG they support, not the military.

"The Tatmadaw has not only shattered my dream to develop regional areas in Myanmar through the hotel business, which I'm studying in Tokyo, but robbed my family of their home," Lian Ceu said. "Until military rule ends, I have no choice but to work in Japan to support my family and NUG activity from here."