Prime Minister Fumio Kishida said Thursday the government plans to declare a quasi-state of emergency for Okinawa, Yamaguchi and Hiroshima prefectures, as requested by their governors who attributed surging COVID-19 cases to the spread of the Omicron strain at U.S. military bases.

The government will make a final decision on Friday after consulting with experts, Kishida said, as concern has grown over a sixth wave of coronavirus infections in the country.

The quasi-emergency declaration, to run from Sunday to Jan. 31 if enforced, will be the first since he took office last year with a pledge to place top priority on the COVID-19 response. 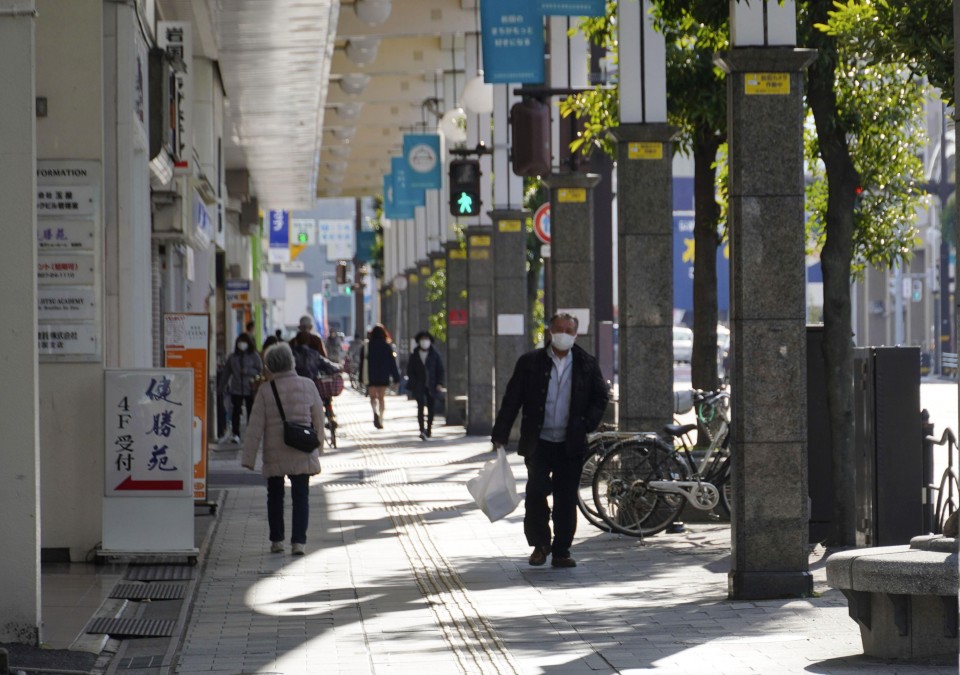 People wearing face masks walk in the western Japan city of Iwakuni on Jan. 6, 2022, as a quasi-state of emergency over the COVID-19 pandemic is expected to be declared due to rampant infections. (Kyodo) ==Kyodo

"Our conclusion is that we should consult (with an advisory panel of experts) over applying stricter measures to prevent a spread of the virus in the requested areas," Kishida told reporters at his office.

Okinawa, home to the bulk of U.S. military installations in Japan, is among the hardest-hit prefectures, reporting a record 981 new infections Thursday.

A cluster of infections has been confirmed at the U.S. Marine Corps' Camp Hansen in the southern island prefecture.

When asked about the link between the sharp rise of infections in the prefectures and the U.S. military, Kishida said it is "difficult" to determine the cause of infections.

Takaji Wakita, who heads a government panel on pandemic response, did not rule out the possibility of a link between infections of local residents and those related to U.S. bases.

In Iwakuni, resident Kazue Tanaka said infections may have been caused by people related to the bases going outside them, and called for stricter outing restrictions.

Kishida said he instructed Foreign Minister Yoshimasa Hayashi to urge the United States to take stronger measures against the virus at U.S. military facilities in Japan during a virtual meeting of the two nations' foreign and defense ministers on Friday.

Yamaguchi Prefecture in western Japan is seeking to apply the anti-virus measures in the city of Iwakuni, which hosts the U.S. Marine Corps Air Station Iwakuni, as well as the neighboring town of Waki.

Should the measures be applied, the prefectural government will request dining establishments in the two areas to shorten business hours and stop serving alcohol, as well as cap the number of attendees at events, during the envisaged period.

Neighboring Hiroshima Prefecture, which saw 273 new infections on Thursday, seeks to impose similar restrictions in the cities of Otake, Hatsukaichi, and Hiroshima, all of which are also close to the Iwakuni base.

Hiroshima Gov. Hidehiko Yuzaki, who has said "many cases" can be traced to Iwakuni, warned that the prefecture could see its largest spread of the virus, with a daily count of new infections predicted to surpass 2,000. 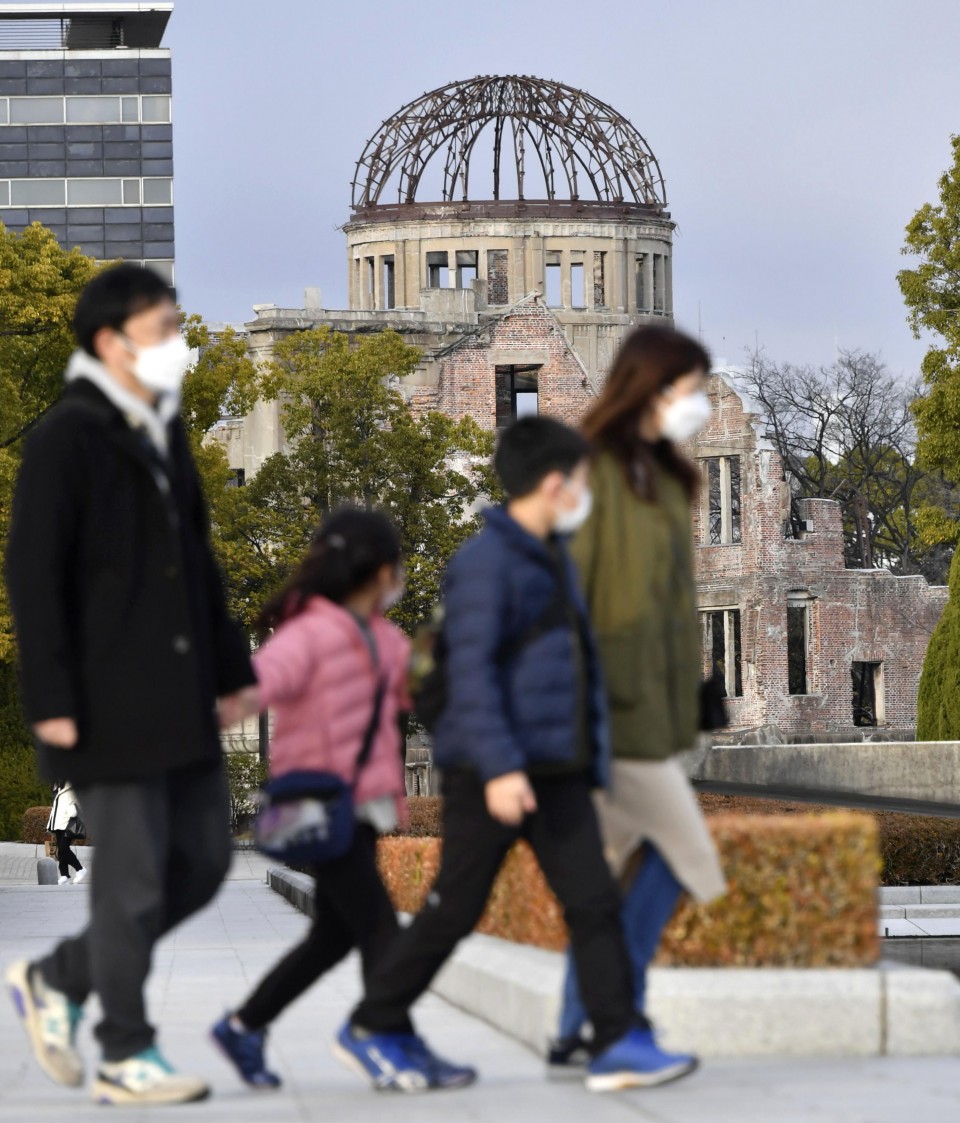 People wearing face masks walk in Peace Memorial Park in the western Japan city of Hiroshima on Jan. 6, 2022, as a quasi-state of emergency over the COVID-19 pandemic is expected to be declared due to rampant infections. (Kyodo) ==Kyodo

The U.S. forces in Japan said Thursday they will bolster anti-virus measures among their personnel, mandating mask-wearing in any public area and on-base facility until a negative COVID-19 test is received.

Wearing masks is also required off-base, regardless of vaccination status.

The military has moved to require all of their personnel to test for the coronavirus within 24 hours of their arrival in Japan after facing criticism for having exempted those departing from the United States from PCR tests since early September in line with U.S. policy.

Toshio Nakagawa, president of the Japan Medical Association, said at a press conference Thursday that Japan has already "entered the sixth wave" of the pandemic.

The government is also likely to delay resumption of its "Go To Travel" subsidy program designed to promote domestic tourism from late January to February or later, according to government sources.

Kishida has vowed to take all necessary measures to pre-empt a surge in COVID-19 cases, banning the entry of nonresident foreign nationals into Japan. His government is seeking to speed up the rollout of vaccine booster shots and making orally administered treatment drugs available. 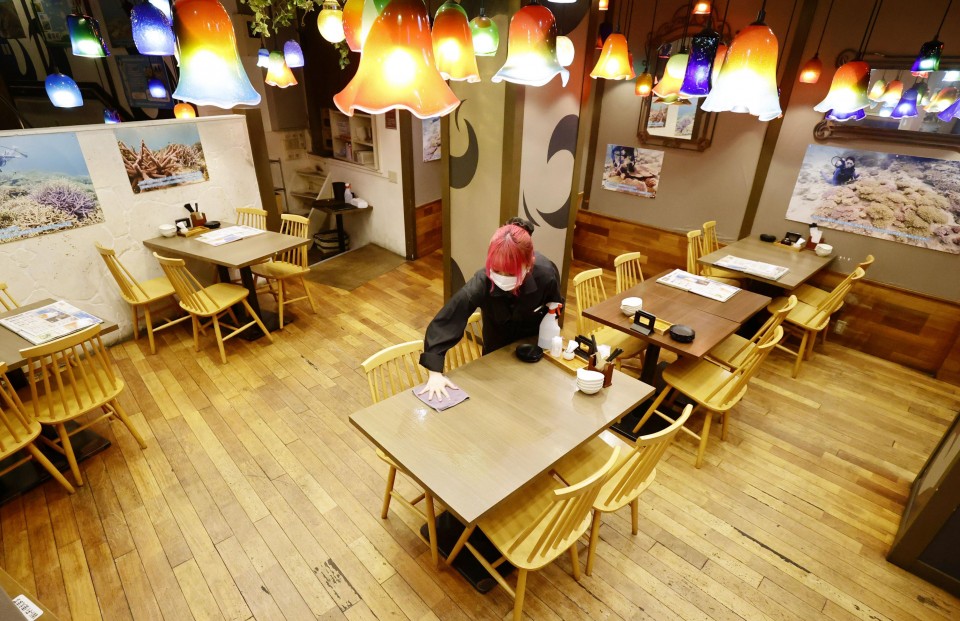 A bar in the Okinawa Prefecture capital of Naha, southern Japan, is quiet on Jan. 6, 2022, as a quasi-state of emergency over the COVID-19 pandemic is expected to be declared following record-breaking daily infections of nearly 1,000. (Kyodo) ==Kyodo

The number of newly confirmed coronavirus cases topped 4,000 in Japan on Thursday for the first time since Sept. 18, though figures are still lower than many other nations including the United States.

So far, at least 37 of Japan's 47 prefectures have reported Omicron infections, with community transmissions confirmed in areas including Tokyo and Osaka.

The Tokyo metropolitan government reported 641 new coronavirus cases Thursday, up from 390 the previous day and hitting its highest level in around three and a half months.

The metropolitan government at a monitoring meeting Thursday raised the alert on the government's four-level infection status scale up one stage from the lowest, with health experts saying infections are "increasing at a pace never before seen."

While the severity level for the medical system was left at the lowest stage on the scale, health experts stressed that hospitalization and treatment plans need to be brought forward in preparation for an explosive spread in infections spurred by the Omicron variant.