Unbeaten sekiwake Mitakeumi overpowered komusubi Daieisho at the New Year Grand Sumo Tournament on Sunday to stay one win ahead of yokozuna Terunofuji atop the leaderboard.

Ozeki aspirant Mitakeumi (8-0) became the first wrestler to register a winning record for the 15-day tournament with a composed performance against Daieisho, champion of last January's New Year meet. 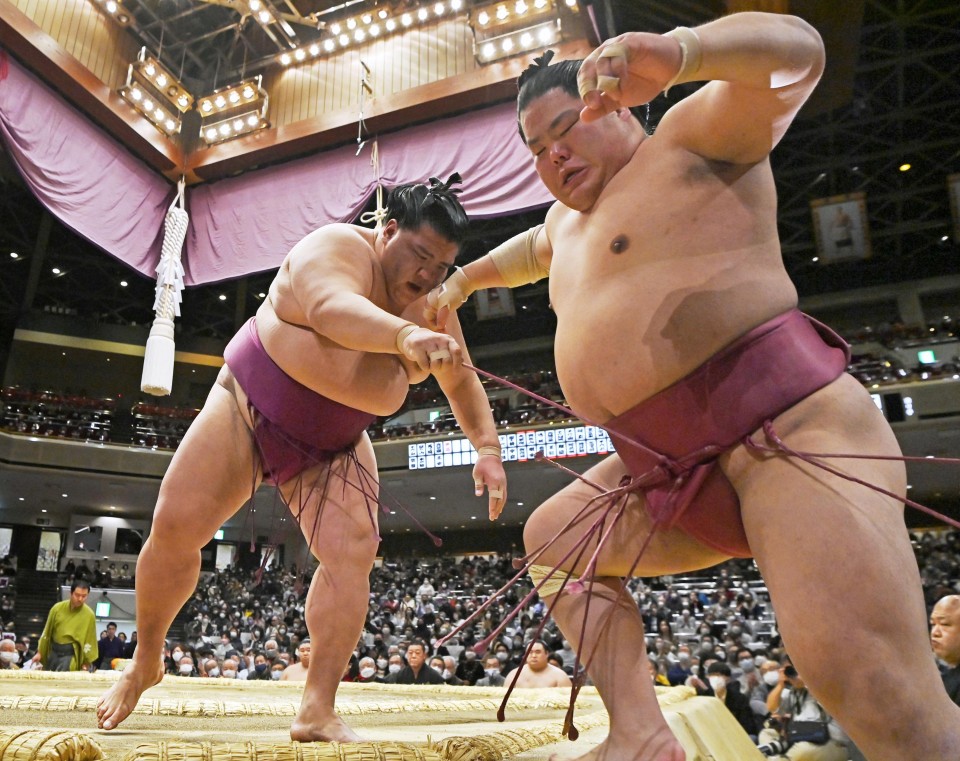 Daieisho started strongly, thrusting Mitakeumi to the straw bales, but the two-time Emperor's Cup winner maintained his footing and pounced following an attempted pull by the former sekiwake, pushing him back across the ring and out.

"I was able to stay patient. My body is moving well and my mind is very focused," Mitakeumi said. "I just want to do my brand of sumo. That's all I'm thinking about and the wins should come as long as I do that."

Terunofuji improved to 7-1 with a comfortable force-out win over No. 4 maegashira Okinoumi in Day 8's final bout at Ryogoku Kokugikan.

The sport's sole grand champion secured a two-handed grip on Okinoumi's belt from the opening clash, and used it to wrench the maegashira off balance and march him over the edge.

Chasing his third consecutive championship, six-time grand tournament winner Terunofuji will have the chance to even the slate against Mitakeumi later in the second week of the competition.

Mitakeumi took the outright lead on Day 7, when No. 6 Abi relinquished his share of first place with a defeat at the hands of No. 5 Onosho (6-2), a day after Terunofuji suffered his only loss, against No. 3 Tamawashi (6-2).

Abi, who made a run at the title in his top-division return in November, dropped a further win off the pace at 6-2 in Sunday's loss to fellow No. 6 Hoshoryu (5-3).

Hoshoryu, the nephew of Mongolian great Asashoryu, was quick off the mark, getting both hands inside and forcing Abi back and out before he could set his feet.

Ozeki Shodai evened out his record at 4-4 by forcing out No. 3 Endo (2-6). In yet another lackluster performance at a grand tournament, Shodai fell out of title contention with three straight losses through Day 7.

The ozeki kept it simple against the former komusubi, meeting him front on from the jump and powering him over the edge.

Sekiwake Takanosho dropped to 4-4 after succumbing to a leg pick against crafty No. 2 Ura (4-4), who lifted an opponent off balance by the leg for the second straight day. His four victims include two wrestlers from the three elite "sanyaku" ranks below yokozuna.

Komusubi Meisei (3-5) was pushed down by Mongolian No. 1 Kiribayama (2-6), who snapped a three-match losing streak.