Joint overnight leaders Terunofuji and Mitakeumi suffered upsets at the New Year Grand Sumo Tournament on Thursday, dropping back into a three-way tie for the lead with Abi at 10 wins and two losses apiece.

Lone yokozuna Terunofuji fell to komusubi Meisei, while sekiwake Mitakeumi was defeated by No. 5 maegashira Onosho on Day 12 at Ryogoku Kokugikan. No. 5 Abi, meanwhile, racked up an impressive win against sekiwake Takanosho. 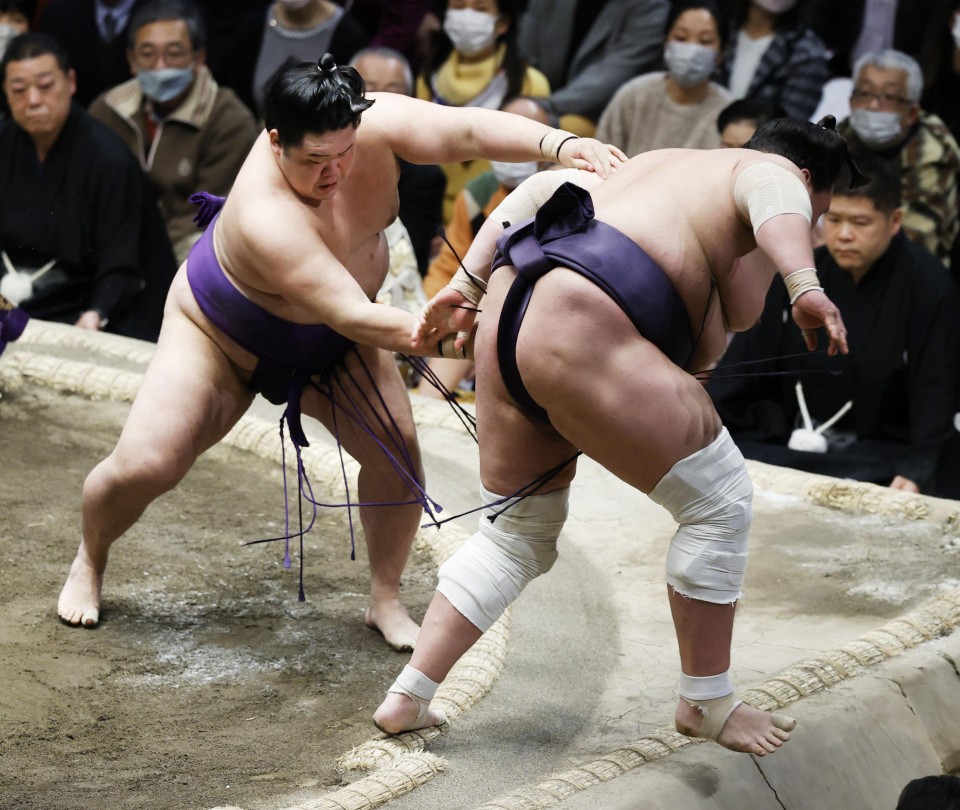 After being denied a belt grip from the jump, Terunofuji looked to drive the backpedaling Meisei (5-7) out over the straw. But the komusubi dodged to the side and used Terunofuji's momentum to swing the six-time grand tournament winner out of the ring with an under-shoulder grip.

"I was very pleased to beat the yokozuna, who is so strong," said Meisei, who managed to avoid a critical eighth loss at the 15-day meet.

"I will just concentrate on winning my remaining bouts."

Former sekiwake Meisei has won two of his last three battles with Terunofuji, after being one of just two men to defeat the Mongolian-born powerhouse during his run to the title at last September's grand tournament.

Unbeaten until Day 10, Mitakeumi (10-2) took his second loss in the past three days at the hands of Onosho (8-4), who claimed an all-important eighth victory that ensures a winning record for the tournament.

In an anticlimactic contest, the two met solidly at the opening before Onosho pulled Mitakeumi down while moving backwards.

Abi opened strongly against Takanosho (6-6) and kept up the pressure, pushing and thrusting at the sekiwake, who lost his footing while retreating.

Struggling ozeki Shodai (5-7) staved off a losing record by slapping down No. 4 Hokutofuji (5-7).

Komusubi Daieisho (4-8) consigned No. 5 Chiyoshoma to a losing record at 4-8 via a quick push out.

The winner of last January's New Year meet, former sekiwake Daieisho is set to return to the rank-and-file after taking his eighth loss on Day 11.