Japanese Foreign Minister Yoshimasa Hayashi and his U.S. counterpart Antony Blinken agreed Saturday to strengthen the deterrence and response capabilities of their countries' alliance to counter China's growing assertiveness in the Indo-Pacific region and North Korea's nuclear and missile threats.

Meeting on the sidelines of the two-day Group of Seven foreign ministerial meeting through Sunday in Liverpool, England, Hayashi and U.S. Secretary of State Blinken underscored the need to cooperate with the Association of Southeast Asian Nations as well as like-minded nations such as Australia and India, the Japanese Foreign Ministry said.

The two officials agreed it is "indispensable to bolster the deterrence and response capabilities of the alliance amid the increasingly harsh security environment," the ministry said. 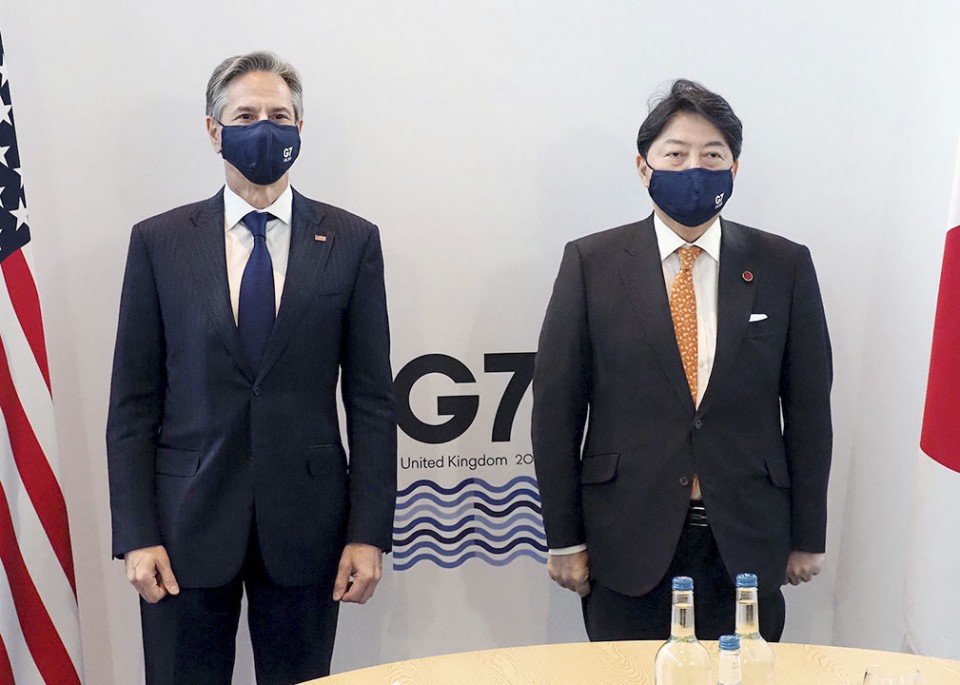 During their first in-person talks since Hayashi took up his post in early November, they did not discuss a diplomatic boycott of the Beijing Winter Olympics next year, a ministry official said.

Washington announced a U.S. diplomatic boycott last week, citing China's human rights record, and Australia, Britain and Canada have said they will follow suit. Japan has yet to reveal its stance, but government and ruling coalition sources say the country is considering not sending Cabinet ministers to the upcoming global sporting event.

Hayashi and Blinken also confirmed that the two governments will arrange for an early visit to the United States by Prime Minister Fumio Kishida for his first summit with U.S. President Joe Biden after becoming Japan's leader in early October.

Hayashi and Blinken, meanwhile, agreed to aim to hold the next round of so-called two-plus-two security talks involving the countries' top foreign and defense officials at an early date, the ministry said.

In his policy speech recently, Kishida vowed to consider "every option" to boost defense, including the acquisition of enemy base strike capability.

Hayashi and Blinken reiterated their strong opposition to China's bid to alter the status quo by force in the East and South China seas and affirmed the importance of "peace and stability" across the Taiwan Strait, according to a Japanese official. 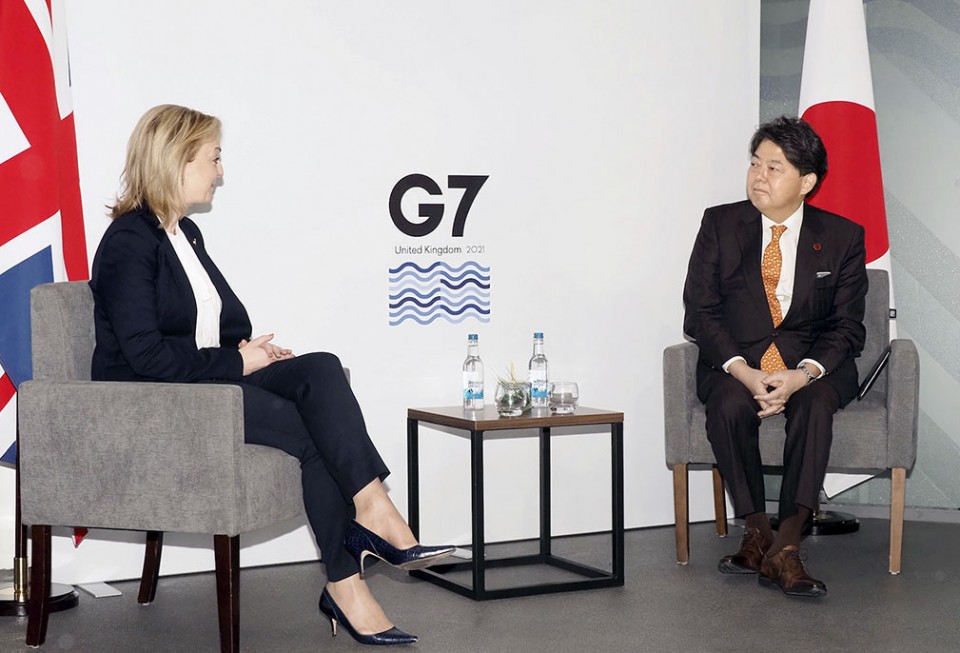 Blinken "conveyed the value" of the trilateral cooperation "for maintaining a free, open, interconnected, prosperous, resilient, and secure Indo-Pacific region," according to the U.S. State Department.

On bilateral negotiations over Japan's annual budget for hosting U.S. military forces, they pledged to accelerate the final arrangements for concluding such talks, the Japanese ministry said.

Cost-sharing deals between Tokyo and Washington are usually signed to cover a five-year term, but the period has been extended by one year following the power transition in Washington early this year to Biden from his predecessor Donald Trump.

Ahead of the G-7 meeting, Hayashi met with British Foreign Secretary Liz Truss and they exchanged views on the Trans-Pacific Partnership free trade deal, which Britain applied to join earlier this year, according to Japan's Foreign Ministry.

Tokyo serves as chair of the TPP's working group on London's accession.

Hayashi welcomed progress made so far by the British government in lifting the import restrictions on Japanese farm products imposed in the wake of the 2011 Fukushima nuclear disaster, while again seeking an early removal of the measure on a scientific basis, the ministry said.