Students applying to enter public high schools from next spring will no longer be required to specify their gender on the application form in all of Japan's 47 prefectures except Tokyo, local education boards said as of Sunday.

The decision comes amid growing awareness of transgender and nonbinary individuals in Japan, many of whom may face psychological distress having to specify a gender they do not identify with.

The Tokyo Metropolitan Board of Education will be the only one to retain the gender field because it has established a gender-based quota system for full-time schools with general courses. 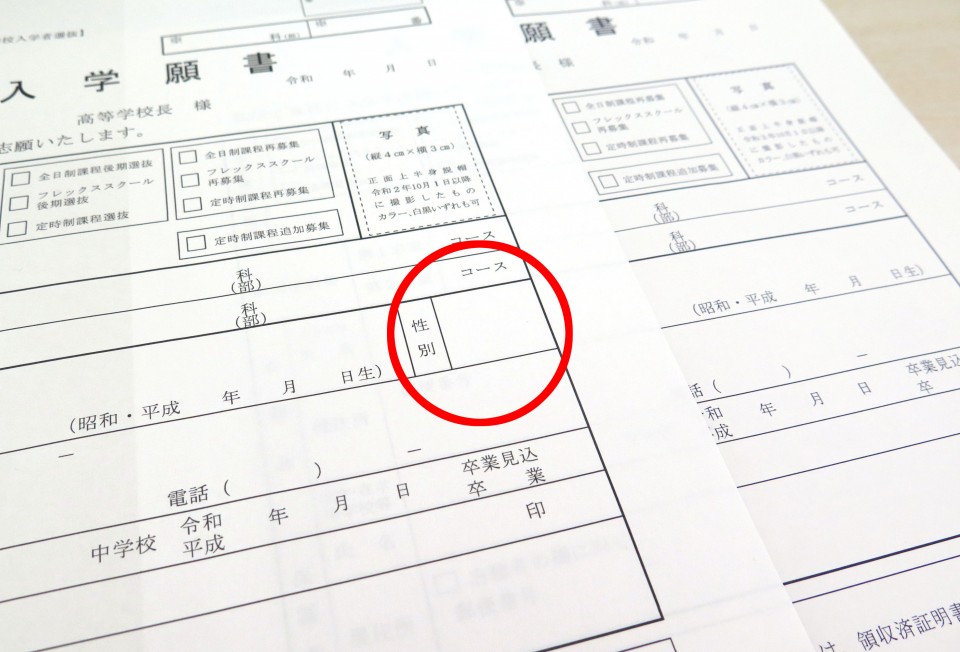 A 2021 application form (L) for public high schools in Gunma Prefecture shows the gender field (circled in red), compared with the 2022 form (R) with the field absent. (Kyodo)

According to local boards of education, the gender field was included in all prefectures' public high school application forms for fiscal 2018 admissions. However, Osaka and Fukuoka removed the field starting from fiscal 2019, with other areas taking similar action in the following years.

Five prefectures -- Yamagata, Tochigi, Gunma, Chiba and Shizuoka -- have decided to remove the field for admissions for fiscal 2022 and onwards.

Just as a fiscal year starts in April in Japan, the academic year begins in April for most educational institutions in the country.

In explaining its decision, the Tochigi Prefectural Board of Education said it "respected sexual diversity," while Chiba's education board said it did not foresee any particular issues with removing the field.

The Tokyo Metropolitan Board of Education decided in September to revise its gender-based quota system in stages after facing growing criticisms that the differing pass mark for men and women is sexist.

An official at the board said that without the quota, the gender field is "essentially unnecessary," suggesting that Tokyo may follow suit in the future.

Mameta Endo, 34, a transgender man and a representative of the sexual minority support group "Nijiizu," said he felt like he was denying himself when indicating his gender on a form.

"(Removing the field) will eliminate the need for students to write a gender different from what they identify as, which in turn will help eliminate gender discrimination," Endo said.

80% of arts professors, awards judges in Japan are male: survey