Those who do not fit neatly into the standard gender tick box like Nishimura and Nakamura are seldom welcomed openly. That, plus personal experiences of exclusion, has been reason enough for many LGBTQ people and their communities to abandon religion altogether. 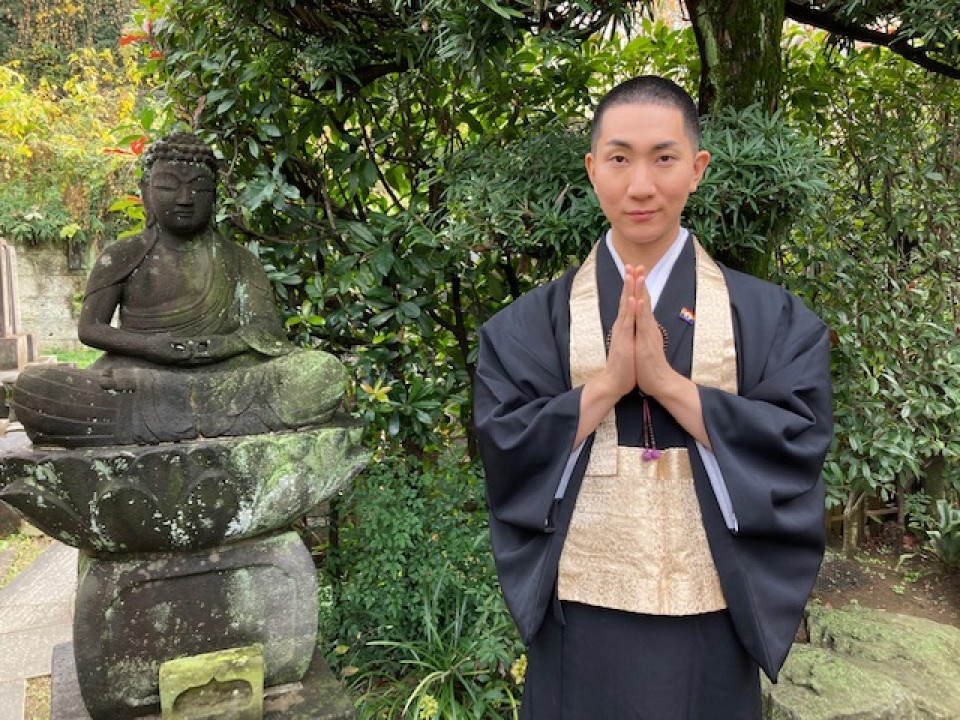 LGBTQ activist and Buddhist monk Kodo Nishimura brings his palms together in a gesture of prayer at his family's temple in Tokyo on Nov. 22, 2021. (Kyodo)

But homophobia, in a country that has yet to legalize gay marriage, has not stopped these Tokyo-based queer religious leaders from doing what they are called to do -- sharing the teachings of Buddha and Jesus, albeit in less traditional ways.

"I don't mean to convert anybody to being Buddhist. I use things like social media and fashion to reach people who are not really interested in Buddhism," Nishimura said in a recent interview with Kyodo News.

"When I discovered Buddhism, it said everybody can be equally liberated. It was very empowering and I felt that I'm not inferior to anybody because I'm a homosexual. What matters is the soul. That message helps us protect our own rights."

Nishimura, who is also a professional makeup artist, does not like a lot of the words people use to describe his sexual identity because he presents as a man but feels he exudes both female and male energies. He calls himself gender-gifted. 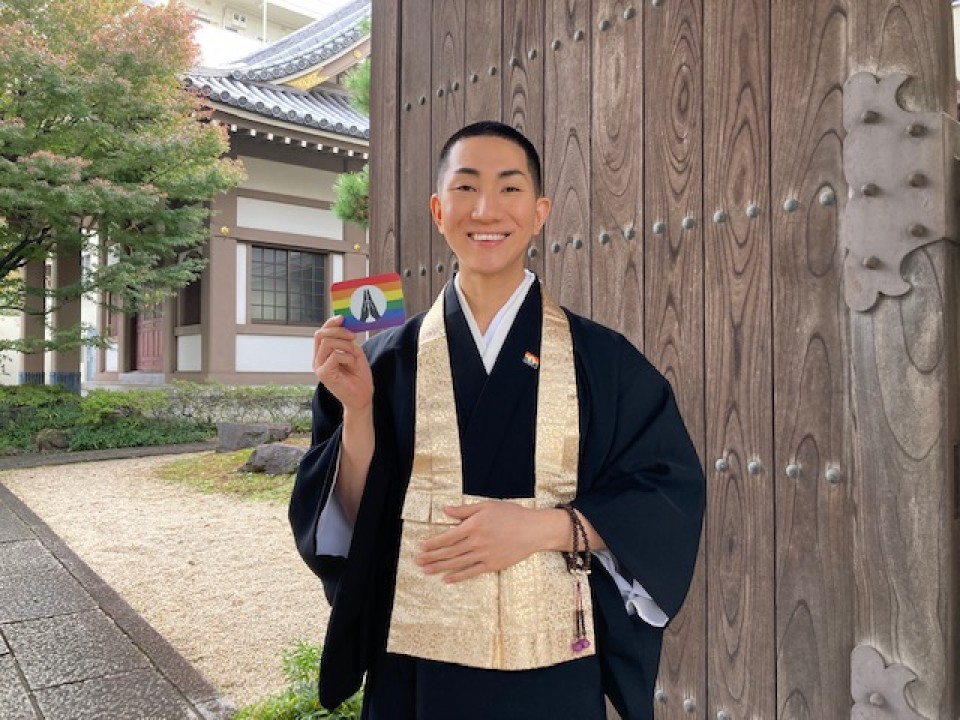 Japanese Buddhist monk Kodo Nishimura is all smiles as he holds up a "gay pride" rainbow sticker he designed at his temple in Tokyo on Nov. 22, 2021.

While the 32-year-old Nishimura will flinch at the word gay, the 53-year-old Nakamura says he does not mind the label, as he is from the older generation whose dictionaries did not include gender-neutral pronouns.

"I have no preference. I tell people I'm gay. I was gay before the world came up with gender pronouns and LGBTQ inclusive language. I don't even know all the terms but if I look hard enough I know I belong in more than one box," Nakamura said.

A Dentsu poll released in April showed that 8.9 percent of Japanese, or approximately one in 11 people, identify as LGBTQ.

Surveys suggest that millennials like Nishimura are significantly more likely than older generations to identify as something other than heterosexual.

Born into a Buddhist family, Nishimura admits he has the freedom of working on his own terms because his home is the 520-year-old temple in which he practices.

When he is not donning a robe he works backstage at beauty pageants, does modeling gigs, writes books and posts on Twitter and Instagram. He even made a guest appearance on Netflix's Emmy-winning hit "Queer Eye."

Nakamura lives a quiet, low-key life, and he is sticking with Facebook. He considers pastoring a divine call to serve and not an earthly career, but life has not always been easy for him.

"I have double minority status, as a gay and a Christian. I live on a low salary, like most pastors," Nakamura said.

Only about 0.8 percent of Japan's population is Christian.

When he started preaching, Nakamura worked on the side in the corporate world to make ends meet until the 7-day work week took a toll on his mental and physical health. At one point he even owned a bar at Shinjuku Ni-chome, one of Japan's most famous gay haunts.

He slowed down after he took a senior pastoral position at Yoyogi Uehara Church, a Protestant United Church of Christ denomination, almost two years ago.

Like Nishimura, who realized he did not fit into society's traditional idea of a male in early childhood, Nakamura has been taking an outside-the-church approach and sharing messages that are intended to resonate far beyond the pulpit and pews.

Nakamura knew he was attracted to other boys by the time he was a junior in high school, when homosexuality was considered a temporary condition and not a permanent identity and even classified as a psychiatric disorder.

Nakamura attended church regularly as a child and was baptized at age 15. He decided to follow the call to ministry and enrolled in a seminary in his 30s.

Today, he is seeking to help those struggling with their sexual orientation incorporate the Bible into their lives in practical ways to help them resolve secular troubles, and make his church a safe place for LGBTQ individuals.

He officiates weddings for LGBTQ couples, though the Japanese legal system does not recognize same-sex marriage. He believes that if Jesus was alive today, he would be accepting of any marriage that is based on love, even if it is between two men or two women. 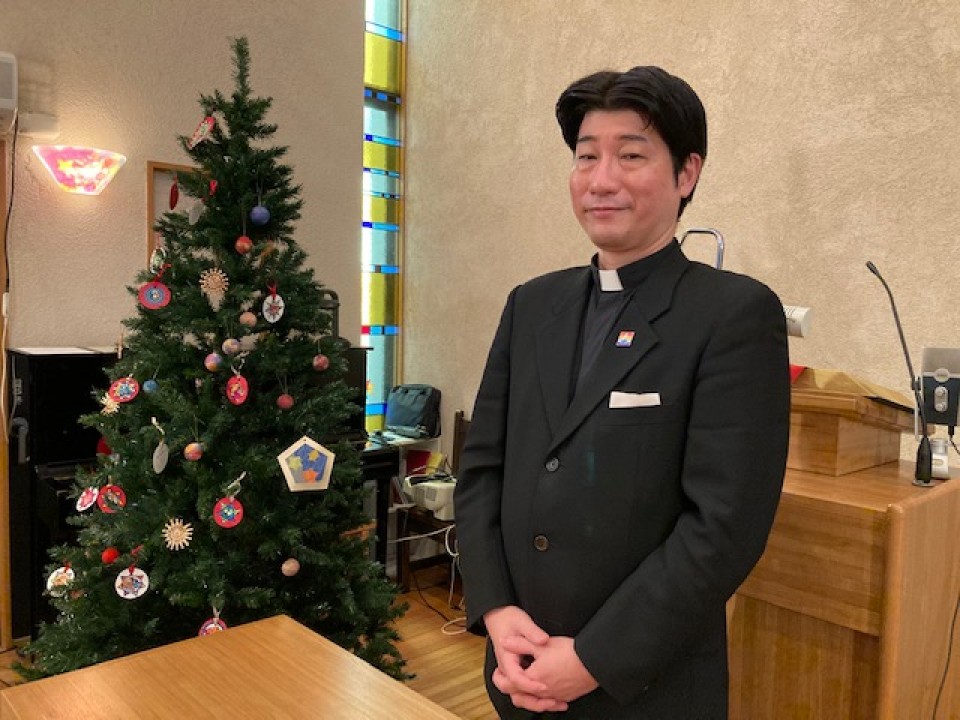 Openly gay Christian pastor Yoshiki Nakamura stands in front of the pulpit of his church in Tokyo on Dec. 3, 2021. (Kyodo)

Nakamura, who has been with his partner for 20 years, splits his time between the church-owned parsonage and his own home where his only roommate is his cat. He also heads a networking group to bring LGBTQ communities and religious communities together.

"I know of about 10 pastors in my denomination who have come out as LGBTQ. But that doesn't mean the group has accepted us. They don't know how to deal with people like us," Nakamura said.

Churches that fail to recognize and respond to the cultural shifts that are happening will lose members fast, Nakamura thinks. He has heard of anti-gay pastors who preach love and spread hate. 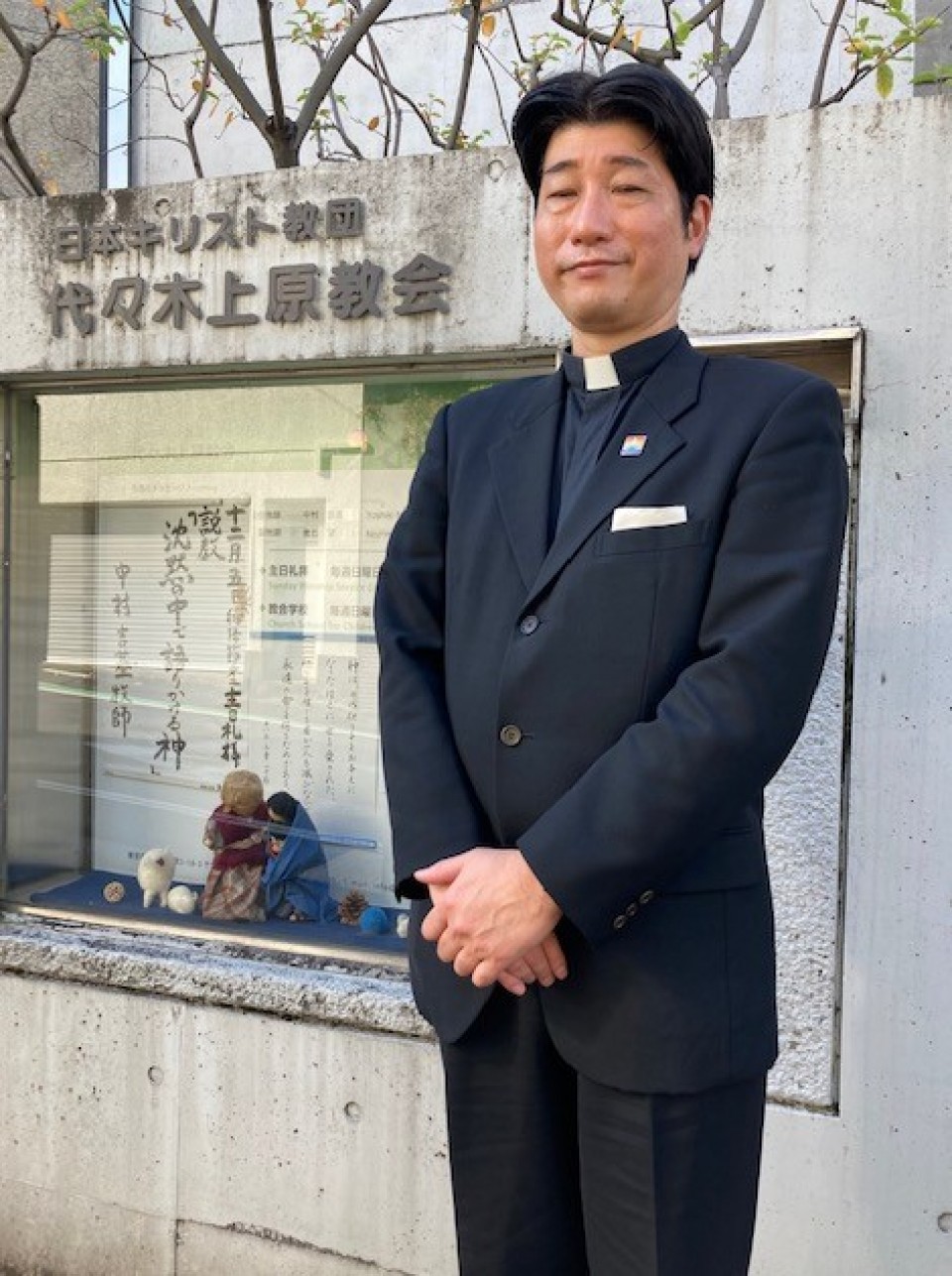 Pastor Yoshiki Nakamura was candid about his sexuality in an interview with Kyodo News at Yoyogi Uehara Church in Tokyo on Dec. 3, 2021. (Kyodo)

"I don't believe Christianity will ever disappear, but I think it will be a thing for older people. The church has too many rules."

When he teaches a Bible course in high school once a week, Nakamura rarely reads passages of Scripture but rather discusses topics like suicide risk among LGBTQ youth. He also brings wider issues of debate in society like Black Lives Matter into the classroom.

They want Japanese people to adopt the love-thy-neighbor, do-no-harm mentality and be allies to the LGBTQ movement. They hope more people, young and old, loosen the shackles of traditional identities and embrace who they are on their terms.

Nakamura thinks people can be true to their religion and support progressive reforms such as LGBTQ rights. He has taken his students on a tour of a nearby mosque, and he is collaborating on a grief care project with a Shinto shrine in the neighborhood.

Nishimura also wants to imagine a new humanity beyond religion. He feels welcomed by the Buddhist community who try to live following Buddha's timeless message of non-violence and compassion.

"I want people to rethink what's considered 'normal' or 'common sense' so they are awakened to justice. I receive wonderful feedback from people who believe in different religions. I want people to see me and know that there is nothing wrong with them," Nishimura said.

"I'm doing what I'm doing to make people question and make people think. Do Buddhist monks have to be minimalistic and free of desire? Can they not wear make-up and walk in heels? Let's not forget that religion was made to help us be free."