For Kyoko Omoda, "mizuhiki," or the decorative art of knot-tying, is a special way of connecting people to Japanese culture through gift-giving, and she hopes to use her experience to help others find their own ties to the past.

"It's a uniquely Japanese tradition of hospitality that not only puts importance on the gift but reflects the sender's thoughtfulness in putting just as much care on how it is wrapped," said Omoda, who started learning the art from a friend 10 years ago when their family moved to Kanazawa, Ishikawa Prefecture. 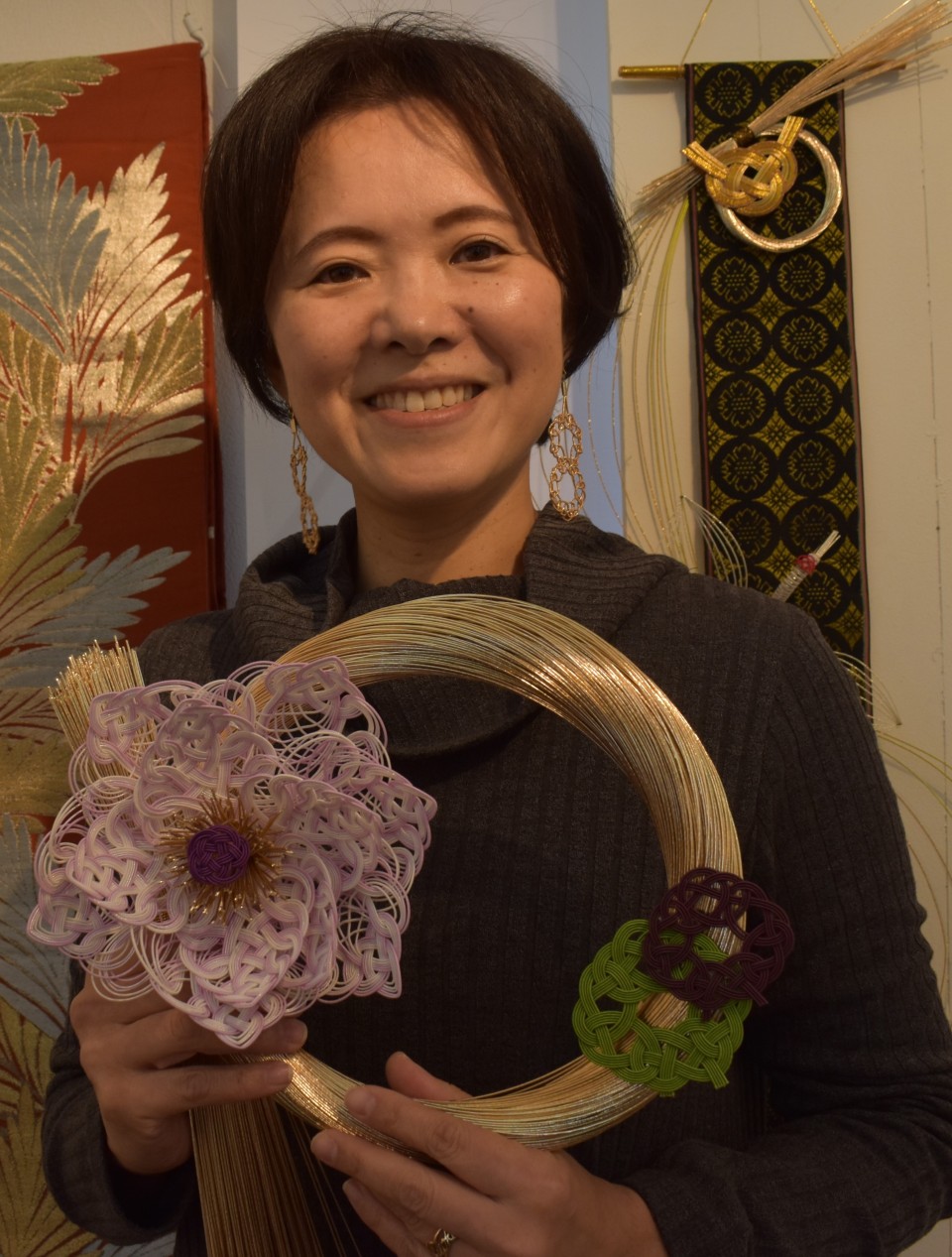 Kyoko Omoda poses with her mizuhiki artwork at an exhibit in Tokyo on Dec. 5, 2021. (Kyodo)

Having spent part of her younger life in Kenya and Indonesia, Omoda, 52, found herself searching for a way to connect to her Japanese cultural identity upon her return. Mizuhiki proved to be one powerful link.

Kanazawa is one of the places where mizuhiki has flourished. There, she found herself smitten with the colorful ornamental cords mainly based on thin strips of Japanese-style "washi" paper. The strips are twisted to form knots and reveal patterns, each carrying a meaning such as "longevity" or "eternal bond."

In Japan, mizuhiki is most often seen when tying packages or envelopes with different patterns for events such as weddings or funerals.

It has also been a staple offering in "yuino" betrothal ceremonies, though couples in recent years have tended to forgo the reciprocal gift-giving formality of yuino.

Mizuhiki is said to date back to the ancient Asuka period from the 6th to 8th century when an envoy from Japan to China during the Sui Dynasty (581-618) returned home with a Sui envoy who brought gifts tied and decorated with red and white hemp strings. From being a luxury item, mizuhiki eventually evolved over the years to a product widely used by the general public.

In modern-day Japan, mizuhiki has been gaining traction, with artists churning out products ranging from earrings and other accessories, New Year decorations and items used in daily life.

"There's so much history in mizuhiki," said Omoda, whose passion for, and acquisition of, mizuhiki skills made her wish for more formal recognition.

She recounted, "There was no such qualifying examination for mizuhiki students and I felt it would motivate us more (if there was)." 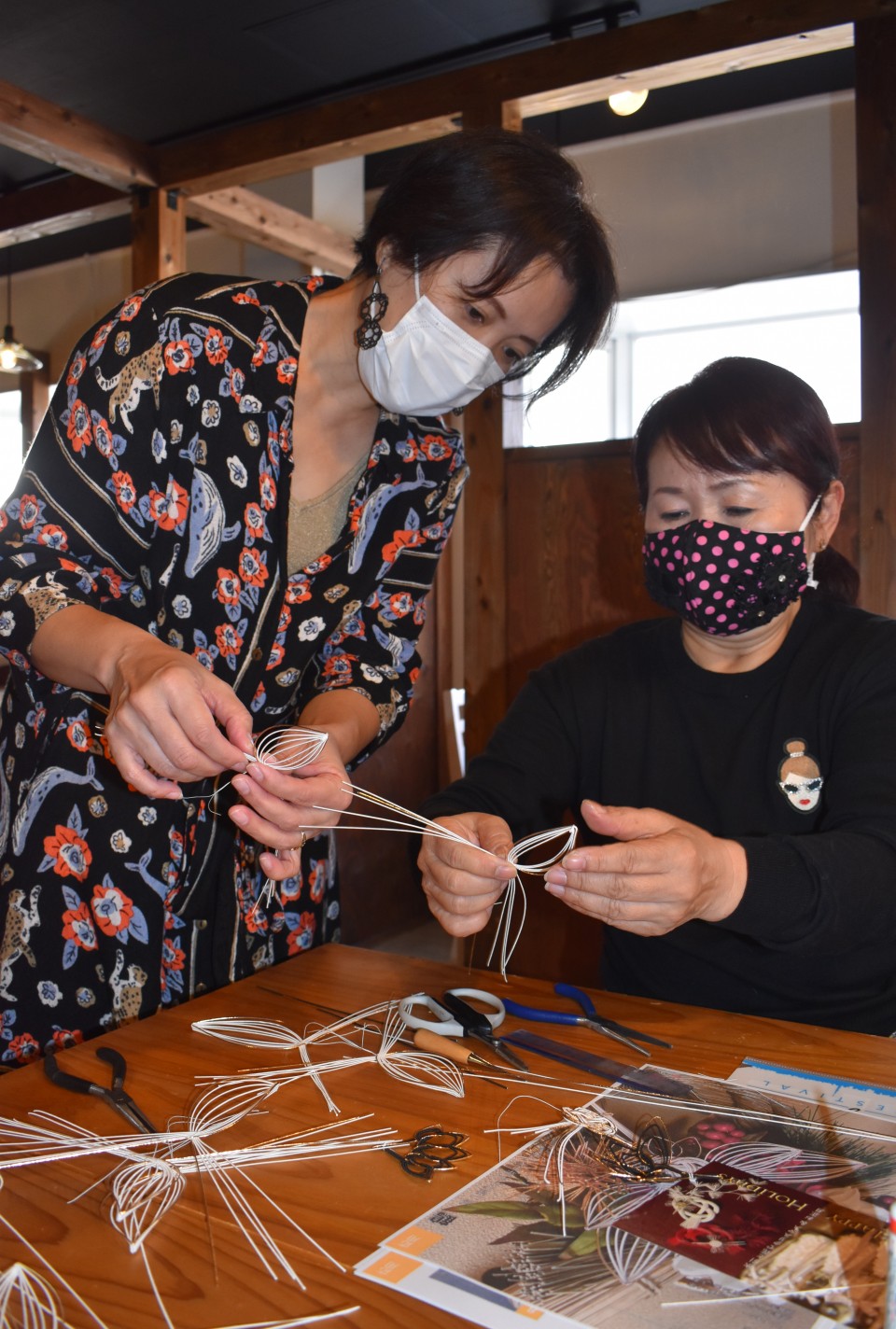 Eventually, she set up in 2019 the Modern Mizuhiki Association, of which she is the representative director. Based in Tokyo, she turned it into a general incorporated association to give more credibility to the certification program for "mizuhiki taishi," or mizuhiki ambassadors.

"They will not only teach but will also play the role of ambassadors to promote and pass on mizuhiki in and beyond Japan," said Omoda, who is among the six teachers. The student body, both in Japan and abroad, has now grown to around 200.

Students who have passed the beginner, intermediate and advanced levels and are supported by their mentors will now be entitled to try to be "ambassadors" -- a certification given after they successfully create original products and conduct a mock lesson.

Yukari Jo, a Tokyo-based flower designer who is one of the few current ambassadors, combines flowers and mizuhiki in her creations, two elements which she says are similar in bringing "comfort" to recipients.

The association's chance to reach a broader audience came during the 2020 Tokyo Olympics and Paralympics after Omoda, who also teaches in English, was invited to demonstrate mizuhiki as part of the games' cultural events. In a setback, however, any live aspects of her demonstrations were moved online due to the coronavirus pandemic.

Last Christmas, Langlais received a mizuhiki kit from her mother. She was also given some tools and parts of mizuhiki used by her great-grandmother. 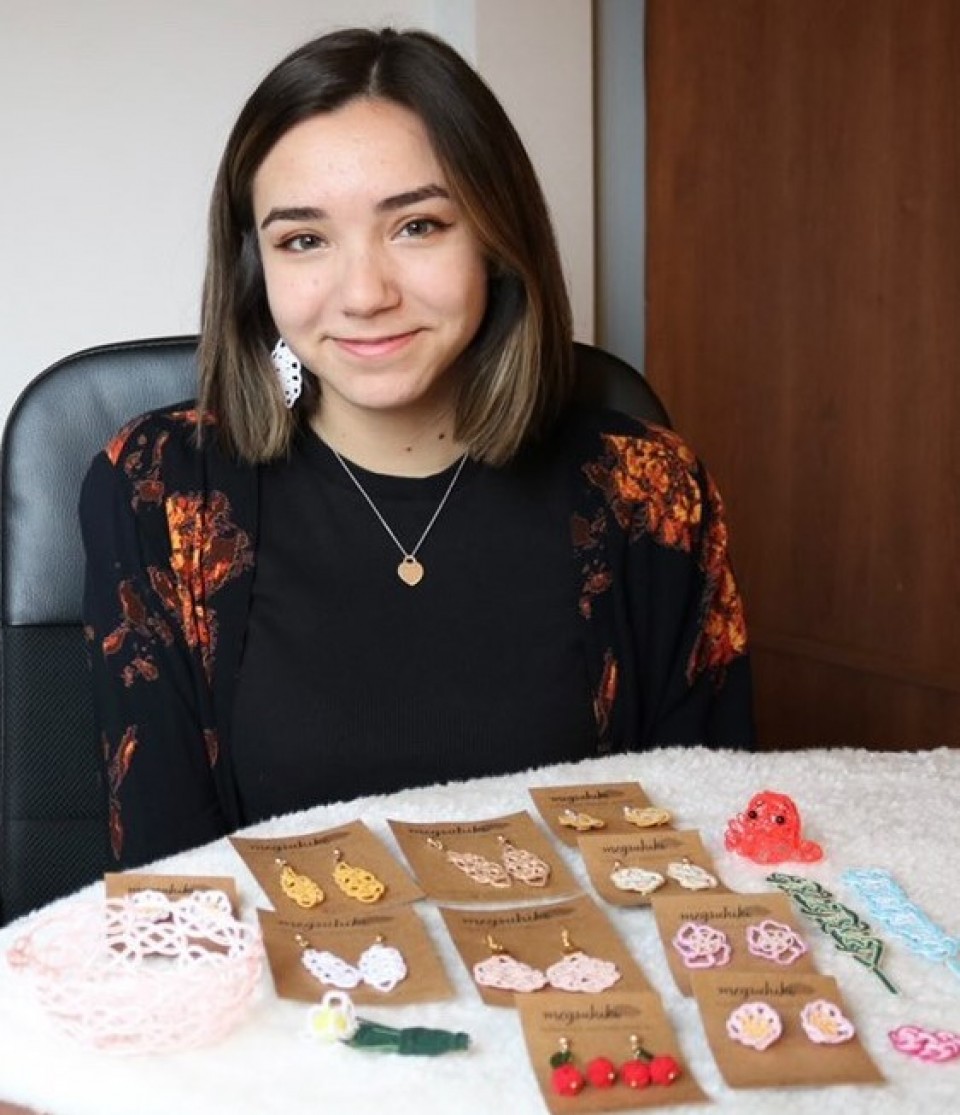 "It makes me feel connected to her even though I've never met her," Langlais said, adding how their family members lost touch with their Japanese roots from her grandmother's generation due to the internment of Japanese-Canadians in camps during World War II.

Her family could not be more happy and proud of her for picking up mizuhiki to embrace their Japanese ancestry.

Langlais recalled the challenge of finding English reference materials. But she set up an Instagram account to share her passion and found her mentor in Omoda.

"Mizuhiki is very unknown in Canada, unlike origami. I'd like others to know the meanings behind the knots such as long, healthy life or friendship," said Langlais.

She has already opened workshops teaching mizuhiki at her school, including to Japanese students, somewhat treading the path of an ambassador for mizuhiki.

Someday, she hopes to gain the certificate to formally become a mizuhiki ambassador and spread the word.

"It's more than just a craft," she said. "It brings connection to people." 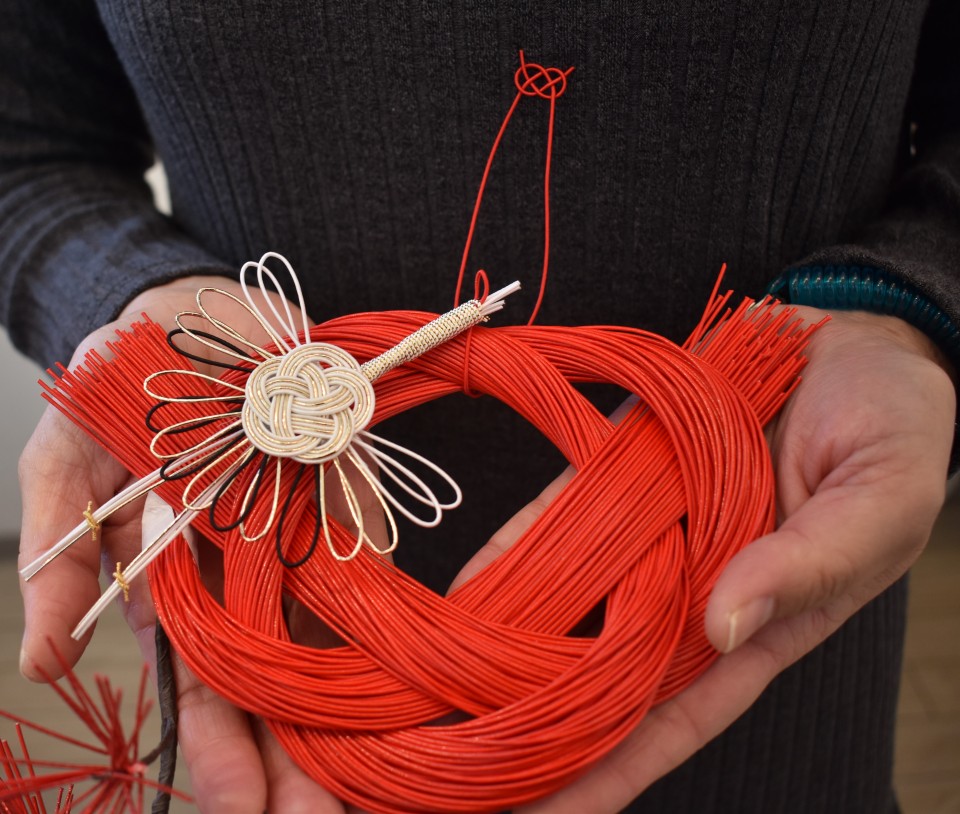 Photo shows a mizuhiki piece created by Kyoko Omoda at an exhibit in Tokyo on Dec. 5, 2021. (Kyodo)