A photographic exhibition depicting the devastation caused by the U.S. atomic bombings of Hiroshima and Nagasaki is currently being held at a Texas university, a quarter of a century after a prominent museum canceled its initial plans to exhibit artifacts amid strong opposition from veteran groups.

The exhibition, titled "Flash of Light, Wall of Fire," was organized by the University of Texas at Austin in cooperation with the Anti-Nuclear Photographers' Movement of Japan, a group of Japanese photographers working to convey the horrors of nuclear weapons to future generations.

The majority of the 69 photographs, most of which are being shown for the first time in the United States, clearly depict the devastation of the scorched earth "under the mushroom cloud." One even shows bones lining the schoolyard of an elementary school near the hypocenter. 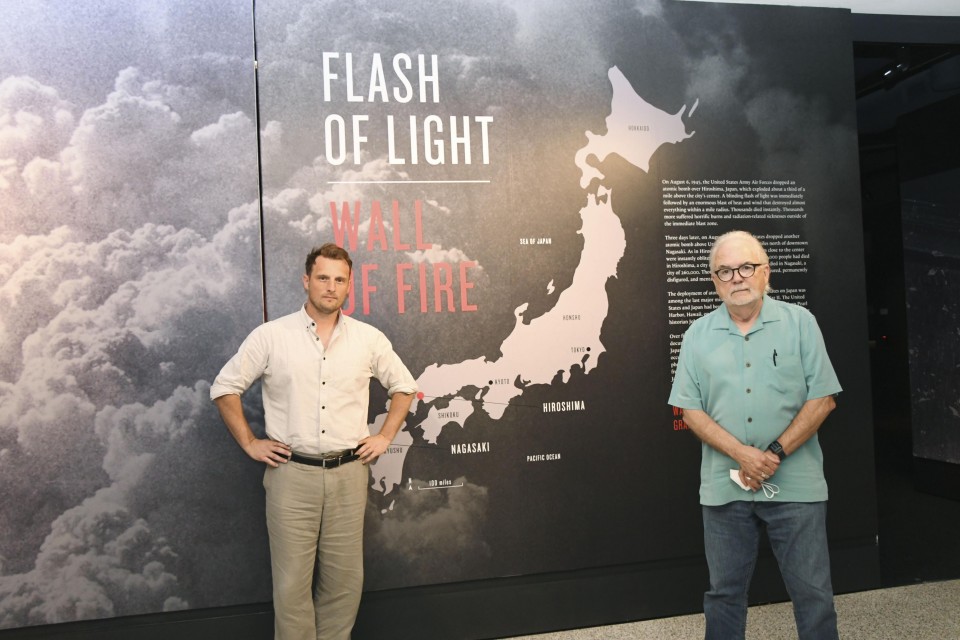 Don Carleton (R) and Ben Wright at the A-bomb photographic exhibition at the University of Texas at Austin on Oct. 26, 2021. (Kyodo)

"I couldn't stop crying. I couldn't. I could feel the tears coming out. It's very moving. And it's what we need to see," said Tiffany Thomas, 50, a history student at the University of Louisiana who went to see the exhibition.

The Smithsonian National Air and Space Museum in Washington had originally planned to hold an exhibition on the atomic bombings on the occasion of the 50th anniversary of the end of World War II but abandoned the plan a few months prior due to strong criticism from veteran groups that it was being overly sympathetic to Japan and insulting to U.S. troops.

"I think if we had done this exhibit in 1995, we would be having a lot of trouble, a lot of trouble, but time has passed obviously, and generations have died," said Don Carleton, 74, executive director of the Briscoe Center for American History at the University of Texas.

While opposition from former soldiers who fought in the Pacific War has faded with time, Carleton admitted he still had some reservations about holding the exhibition.

But after much discussion, he felt it was "worth doing" as it would serve as a teaching tool for younger generations who now have few opportunities to learn about war and what a nuclear weapon could do to people when it is dropped.

Regarding the view still held by some that dropping the atomic bombs was the right decision, Carleton said he has no intention of engaging in that debate.

Ben Wright, a 39-year-old doctorate candidate at the University of Texas and a member of the project team, stressed that the photos of Hiroshima and Nagasaki show that the use of nuclear weapons cannot be deemed as "necessary" ever again.

"It should not happen again. We can all agree on that. There's no controversy," he said.