Heavy snow continued to hit areas on the Sea of Japan coast from the country's north to west on Monday, with many vehicles stranded, air and railway traffic disrupted and some cities in western Japan seeing record snowfall due to a strong winter pressure pattern.

Hikone in Shiga Prefecture saw 68 centimeters of snow accumulate while Asago in Hyogo Prefecture got 71 cm in a 24-hour period through early Monday, both the most ever since such statistics started being compiled, the Japan Meteorological Agency said.

The agency warned that heavy snowfall as well as icy roads and high waves could continue through Tuesday, and also cautioned against possible lightning and strong wind gusts due to extremely unstable atmospheric conditions in some places. 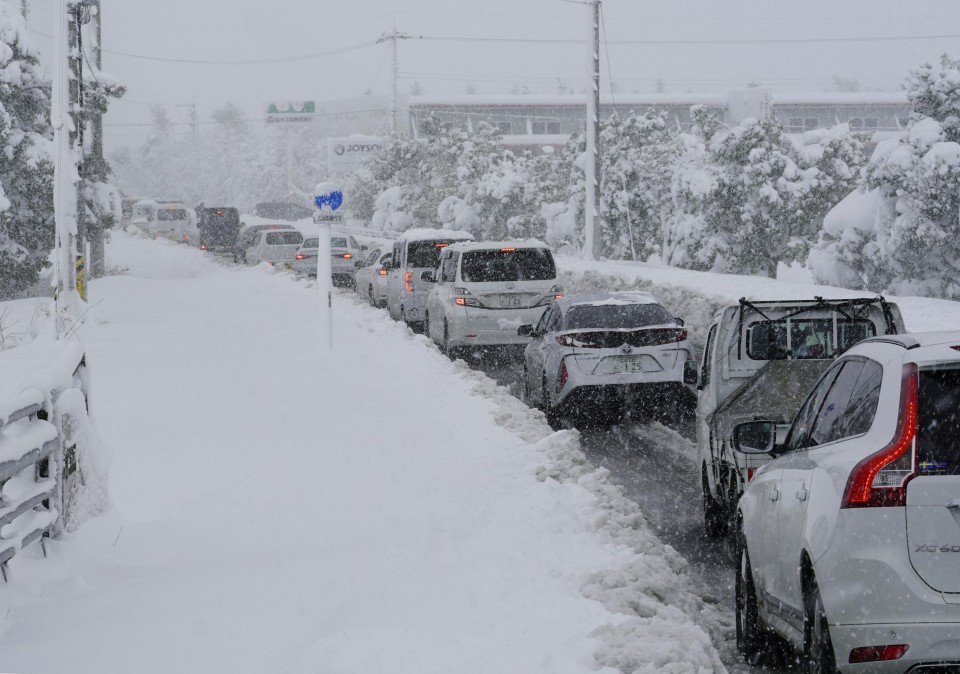 Vehicles are stranded on a road in the Shiga Prefecture city of Hikone, western Japan, on Dec. 27, 2021, due to record-breaking snow that has hit the region. (Kyodo) ==Kyodo

Elsewhere, the deepest snowfall was recorded at Aomori in the northeastern prefecture of Aomori at 200 centimeters, while snow also accumulated in the cities of Kyoto, Nagoya and Hiroshima.

As of Monday afternoon, a total of 10 people had been injured due to the blizzard from over the weekend, including two who sustained serious injuries in relation to snow clearing work.

A vehicle struck another car from behind at around 6:30 a.m. on the Maizuru-Wakasa Expressway in Kyoto Prefecture, western Japan, while a truck waiting for the accident to be cleared got stuck in snow, causing a traffic jam of around 20 vehicles. 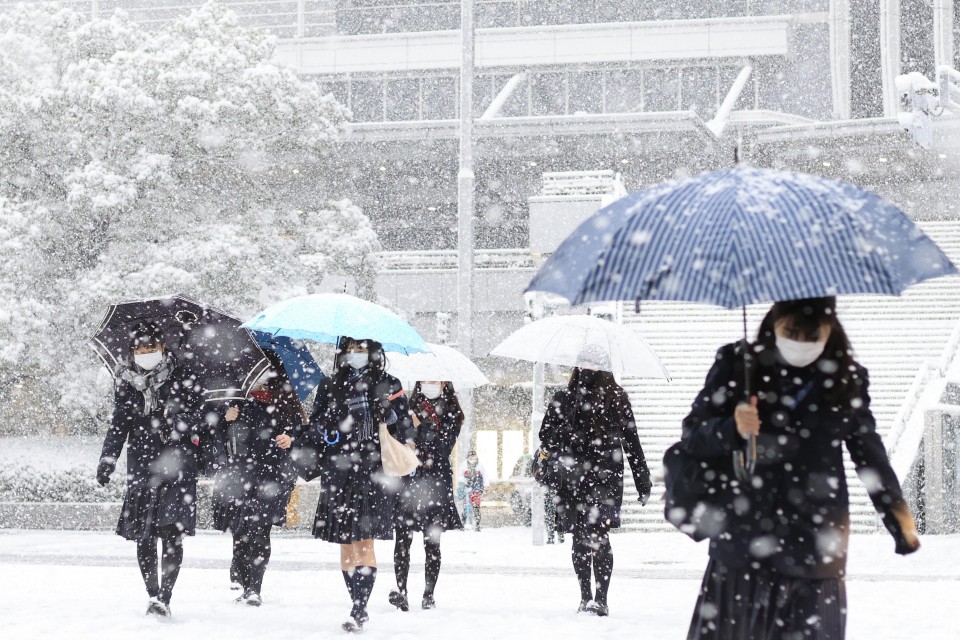 The road operator, West Nippon Expressway Co., closed both outbound and inbound lanes of the expressway until snow was removed. The expressway was fully reopened after noon.

On a section of the National Route 8 in Hikone, a large truck got stuck just before dawn. The incident at one point caused a backup of traffic stretching for about 2 kilometers.

A 44-year old man was stranded in nearby Toyosato on his way to work in Hikone after encountering other stranded vehicles. "I have not moved for four hours." 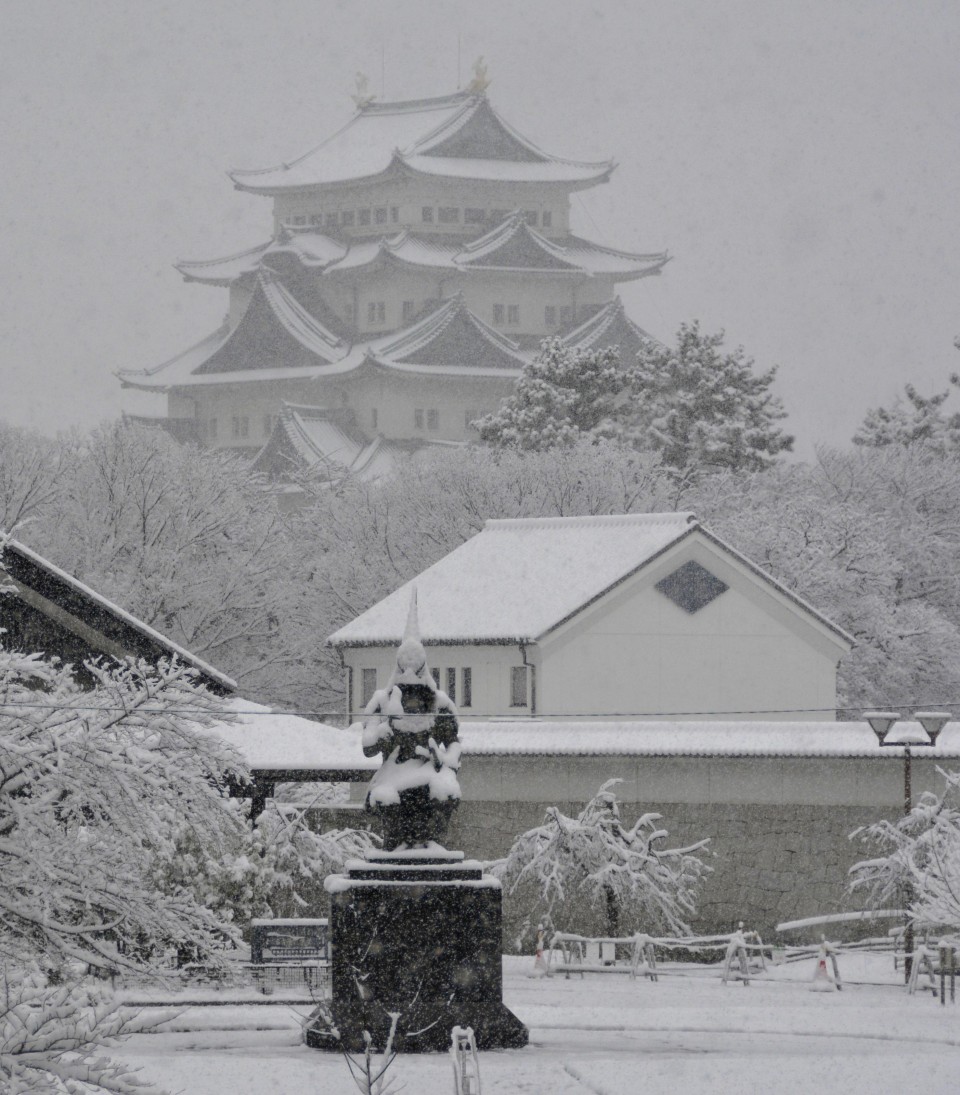 Local residents were seen in the morning clearing snow from the road on the Toyosato section of the highway.

One of them, a 47-year old man, said around 60 cm had accumulated by morning. "It has been a while since I've seen this much snow."

The snow also led to partial closures of other major transport networks such as the Meishin Expressway connecting the Nagoya and Kobe metro areas.

Flights in and out of the Sea of Japan coastline and the northern island of Hokkaido were also canceled, while train services were also disrupted. 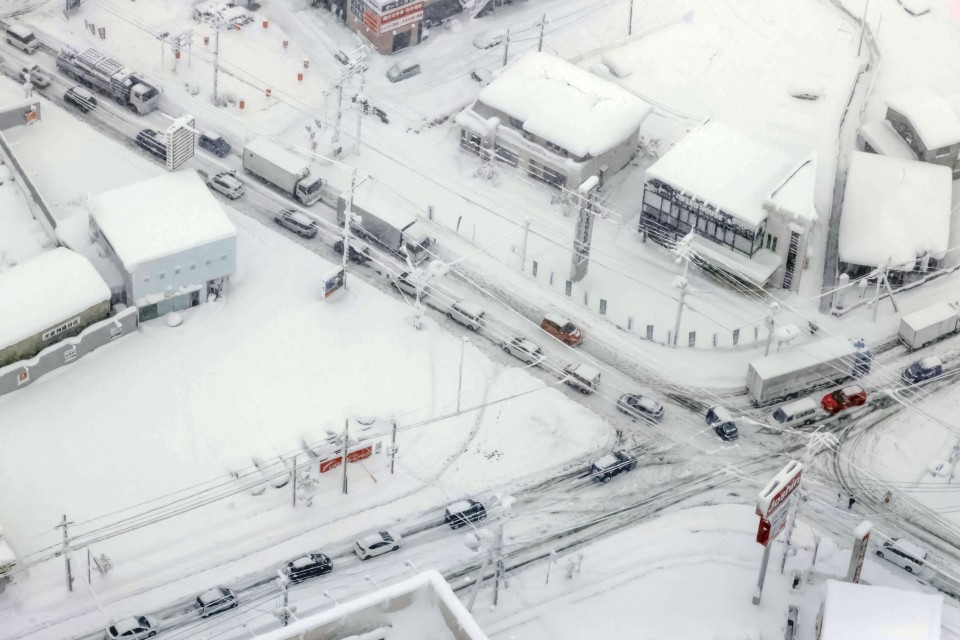 Photo taken on Dec. 27, 2021, from a Kyodo News helicopter shows vehicles stranded on roads in the Shiga Prefecture city of Hikone, western Japan, due to record-breaking snow that has hit the region. (Kyodo) ==Kyodo

Heavy snow caused the Tokaido Shinkansen Line that runs between Tokyo and Osaka to operate at slower speeds.

A car was stuck at a railway crossing on West Japan Railway Co.'s Biwako Line at around 12:20 a.m. Monday, causing seven rail lines including a special rapid service to experience delays for up to four hours.

The railway company also suspended on Monday services for 52 limited express trains, including those connecting to cities like Kyoto, Nagoya and Kanazawa.