Prime Minister Fumio Kishida safely navigated a general election in 2021 as new leader of Japan's ruling party, but when he faces voters again in the 2022 upper house election, he is likely to be judged on his diplomatic skills and ability to realize his vision of narrowing the gap between rich and poor.

Three months into his tenure, Kishida has been building a new leadership image by repeatedly stressing his "ability to listen" to people and trying to differentiate himself from his predecessors Yoshihide Suga and Shinzo Abe, who were both known for their top-down approaches.

With the country experiencing a lull in COVID-19 infections, analysts say voters will likely evaluate Kishida's premiership by how quickly he puts the economy back on a recovery track before they go to the polls in the House of Councillors election in summer. 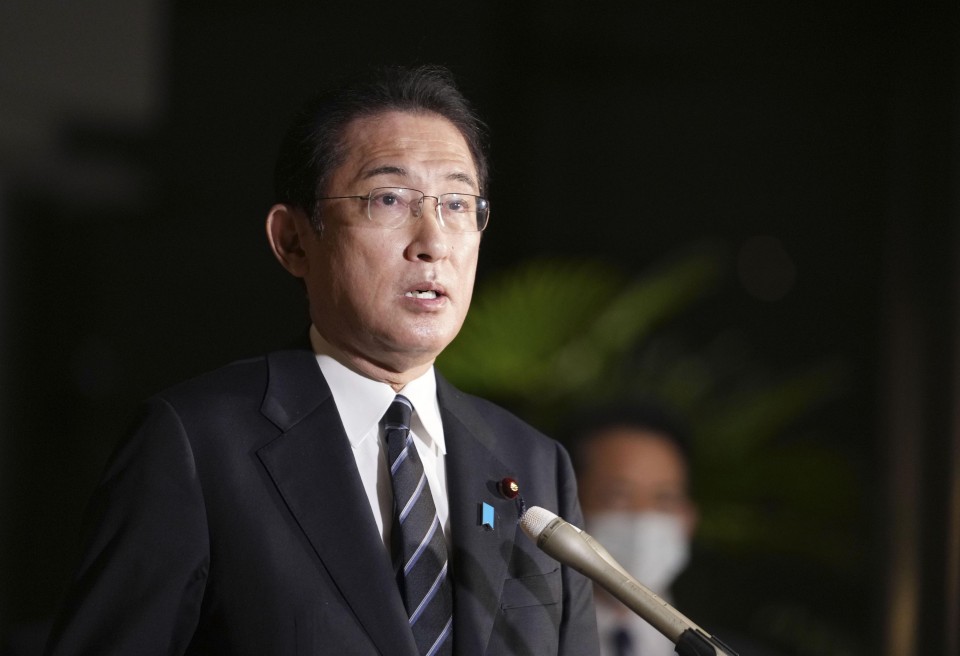 He is also likely to be judged by how he handles the diplomatic challenge for Japan of the confrontation between the United States and China.

"Going into the upper house election, what will definitely come under scrutiny is whether he is really achieving things he pledged" under his "new capitalism" slogan, said Hitoshi Komiya, a professor of Japanese political history at Aoyama Gakuin University in Tokyo.

"And in diplomacy, eyes will be on whether he can send out unambiguous messages when he is asked to take a stand," Komiya said.

After the United States declared a diplomatic boycott of the Beijing Winter Olympics over human rights abuses, Kishida, hoping to offend neither Beijing nor Washington, sought to perform a balancing act by deciding to send to the event not a government delegation but instead upper house lawmaker Seiko Hashimoto, who was president of the organizing committee of the Tokyo Olympics and Paralympics, and two others.

While there is no prospect of realizing a Japan-China summit after President Xi Jinping's visit to Japan in the spring of 2020 was indefinitely postponed, Kishida hopes to visit the United States as early as possible for a summit with President Joe Biden.

"There will be moments Mr. Kishida will be told to take sides, and in that kind of situation, it will be impossible to please everyone," said Komiya.

While the prime minister may have little to show on the diplomatic front in the near future, Toru Yoshida, a political science professor at Doshisha University in Kyoto, said voters will be closely watching whether Kishida can deliver on his pledge to realize a new form of capitalism that focuses on economic growth and redistribution of wealth through wage hikes.

"He will be measured by whether he can raise people's incomes in such a way that they can feel their lives actually changing for the better," said Yoshida.

In a recent speech on the pledge, Kishida vowed to achieve inclusive growth by first raising the state-decided wages of care workers before going after other goals including encouraging private investment in the fields of climate change and digitalization.

Despite these challenges he faces, the difficulty for the main opposition Constitutional Democratic Party of Japan of coming up with new election strategies in a matter of months after its lackluster performance in the lower house election in October may bode well for Kishida's Cabinet, which enjoyed a solid support rate of 60.0 percent in a recent Kyodo News poll, analysts say.

"The fact that the CDPJ was unable to gain as many seats as it had hoped for in the House of Representatives election was partly because the campaigning period was short but also because it was difficult to differentiate their policies" from those of Kishida's, Doshisha University's Yoshida said.

The CDPJ, a liberal party that has the backing of the Japanese Trade Union Confederation, also known as Rengo, formed an alliance with the Japanese Communist Party and other opposition parties to increase their chances of winning seats in the single-seat constituencies against candidates backed by the Liberal Democratic Party-led ruling camp in the Oct. 31 election.

But the CDPJ lost 14 lower house seats, leaving it with a total of 96 in the 465-seat chamber.

The CDPJ's recently elected leader Kenta Izumi, known for his more moderate stance in the party, has pledged to present alternative policies rather than simply criticize the government, though he has yet to share his views on what to do with the controversial alliance with the JCP, which Rengo has openly opposed, in the election.

"This is the period for repositioning, both for the ruling and opposition camps," Yoshida said.

Kishida is buying time before wage hikes spread to wider industries by giving out cash benefits to child-rearing households to help ease the economic fallout of the novel coronavirus pandemic, analysts say.

The benefits, a pillar of Kishida's economic stimulus package, were hotly debated in the extraordinary Diet session as the government initially insisted on giving 100,000 yen ($870) to households for each child 18 or younger in a combination of coupons and cash but quickly reversed its policy and allowed local governments to give the handout entirely in cash.

"This is a really difficult situation for opposition parties," Aoyama Gakuin's Komiya said. "It's easy to confront a leader like Mr. Abe, who puts out a plan and does not change it, but Mr. Kishida has adopted a stance to compromise."