The U.S. administration of President Joe Biden said Monday it has decided on a diplomatic boycott of next year's Beijing Olympics, in a show of protest over China's alleged human rights abuses against the Muslim Uyghur minority and others.

The decision came just weeks after Biden held his first face-to-face online meeting with Chinese President Xi Jinping, in which the two leaders agreed to maintain communication to ensure that tense Sino-U.S. relations will not lead to conflict.

"The Biden administration will not send any diplomatic or official representation to the Beijing 2022 Winter Olympics and Paralympic Games," White House Press Secretary Jen Psaki said, in an announcement that drew a swift rebuke from China but was hailed by human rights defenders.

U.S. athletes will still be allowed to compete in the global sporting event slated to start on Feb. 4.

The move is intended to send a "clear message" that the United States cannot proceed with "business as usual" given China's alleged human rights violations which Washington has labeled "genocide," Psaki told a press conference.

Psaki said the United States has informed its allies of the decision and "we will leave it to them to make their own decisions."

Countries such as Australia and Britain have reportedly been considering a diplomatic boycott.

On Tuesday, China criticized the Biden administration, telling reporters in Beijing that the Olympics are not a stage for political shows and manipulations.

Pledging that China will take countermeasures against the U.S. diplomatic boycott, Foreign Ministry spokesman Zhao Lijian said it will hurt cooperation between the two major powers.

As for the 2028 Los Angeles Olympics, Zhao said, "The United States should clearly recognize the consequences of the wrong act."

In Tokyo, Japanese Prime Minister Fumio Kishida told reporters on Tuesday that the government will make a decision while taking into consideration the country's national interests and the significance of the event.

China has been under international scrutiny over its treatment of Uyghurs and other minority groups in its far-western Xinjiang region. The U.S. government has accused Chinese authorities of mass arbitrary detentions, forced sterilization and forced labor among other abuses.

Beijing has denied the allegations and expressed strong opposition to actions that "politicize" sports.

Liu Pengyu, spokesman of the Chinese Embassy in the United States, tweeted that people calling for a diplomatic boycott of the Olympics are "doing so for their own political interests and posturing."

"In fact, no one would care about whether these people come or not, and it has no impact whatsoever on the (games) to be successfully held," he said.

The International Olympic Committee said the presence of government officials and diplomats is a "purely political decision for each government, which the IOC in its political neutrality fully respects."

The IOC also said Washington's announcement had made it "clear" that the participation of athletes is "beyond politics and we welcome this." 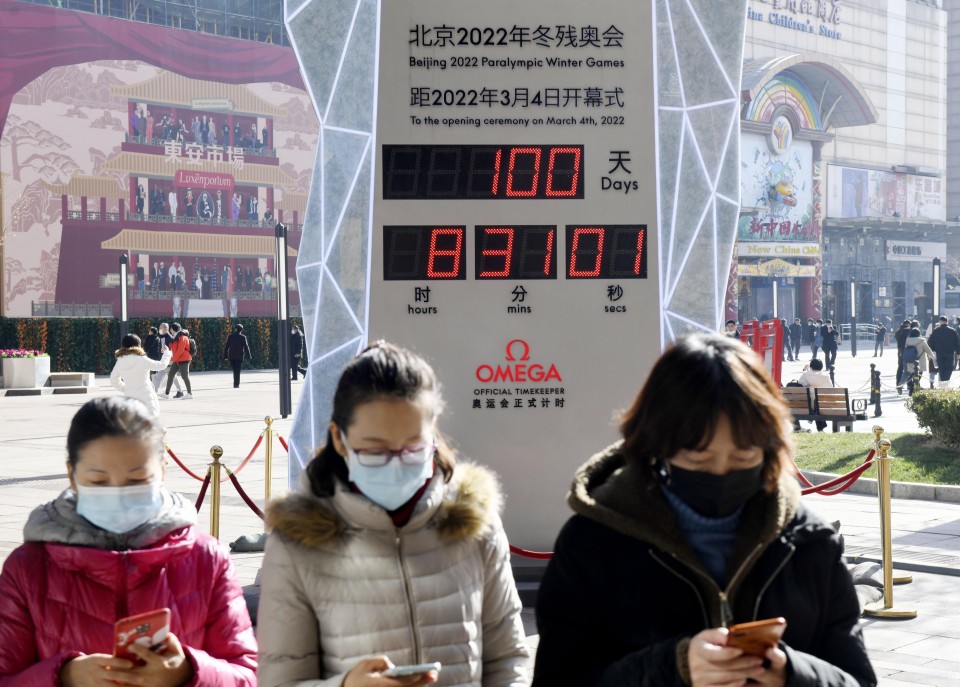 But it added, "This shouldn't be the only action. The U.S. should now redouble efforts with like-minded governments to investigate and map out pathways to accountability for those responsible for these crimes and justice for the survivors."

In 1980, the United States fully boycotted the Moscow Olympics, including a pullout of all U.S. athletes, to express displeasure over the Soviet Union's invasion of Afghanistan a year before.

With Washington seeking international support for the boycott, more than 60 countries, including Japan, refused to participate in the Summer Games. Nevertheless, some U.S. allies such as Britain and France did not join the move.

Asked why the Biden administration did not go as far as barring athletes from taking part in the games, Psaki indicated that a diplomatic boycott is enough to convey U.S. intentions and insisted that athletes who have been working hard training and preparing for the event should be able to compete.

Biden said in November that his administration was considering a diplomatic boycott of the Beijing Olympics, adding another source of friction to an increasing rivalry between the United States and China in military, economic, technological and other fields.

U.S. House of Representatives Speaker Nancy Pelosi urged world leaders to boycott the games in comments earlier this year during a congressional hearing.

China, meanwhile, has been under pressure recently over the safety of female tennis star Peng Shuai, who last month claimed she had been forced by a former vice premier into having sex during a certain period of their extramarital relationship.

While images of her later appeared in state-run media, concerns have lingered over whether she is free from government censorship or intimidation.