Foreign ministers of the Group of Seven industrialized nations on Saturday each spoke their positions on this winter's Beijing Olympics, a Japanese delegation source said, as the United States is taking the lead in diplomatically boycotting the event.

The G-7 meeting in Liverpool, England, comes as Britain and Canada have joined forces with the United States over a diplomatic boycott, citing China's human rights record, but France, to host the Summer Games in Paris in 2024, and Italy, which will host the Winter Games in 2026, are unlikely to follow suit.

Speaking on the first day of the two-day meeting, Japanese Foreign Minister Yoshimasa Hayashi told his G-7 peers that Tokyo will make a decision at an appropriate time after comprehensively taking into account various issues, according to the source. 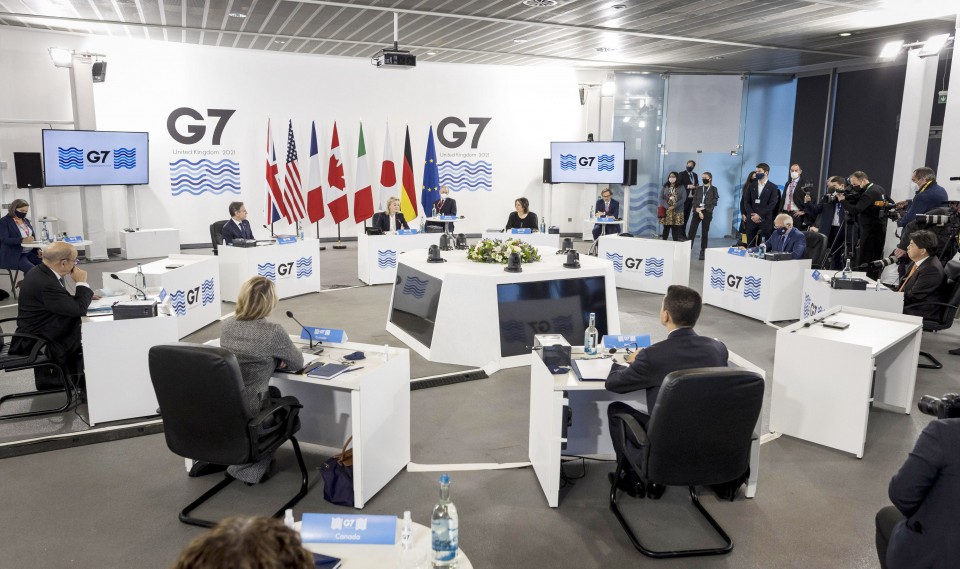 Foreign ministers including Japan's Yoshimasa Hayashi (far R) attend a meeting on day one of the G7 Summit Of Foreign And Development Ministers at the Museum of Liverpool on Dec. 11, 2021 in Liverpool, England.(Getty/Kyodo)

Hayashi expressed opposition to China's attempts to unilaterally alter the status quo in the East and South China seas, and he voiced serious concerns about the situation in Hong Kong and alleged human rights abuses in China's far-western Xinjiang region, the Japanese Foreign Ministry said.

Hayashi also stressed the importance of ensuring peace and stability over the Taiwan Strait, the ministry said.

"Japan aims to build a constructive and stable relationship with China in which Tokyo asserts when needed and pushes Beijing for responsible action while continuing dialogue and cooperating in common challenges," he was quoted by the ministry as saying.

Other G-7 members -- Britain, Canada, France, Germany, Italy and the United States plus the European Union -- made remarks, including expression of concerns, about China, it said, without providing details.

Among other geopolitical issues, the G-7 ministers expressed deep concerns about the Russian military's movements around the border with Ukraine, according to the ministry.

They reaffirmed the G-7's support for Ukraine's sovereignty and territorial integrity in the face of Russian aggression.

The United States and its European allies are concerned that the movement of Russian troops and weapons to the border area may be a prelude to invasion.

"We need to defend ourselves against the growing threats from hostile actors and we need to come together strongly to stand up to aggressors who are seeking to limit the bounds of freedom and democracy," British Foreign Secretary Liz Truss said as she opened the meeting, without singling out Russia and China.

On Sunday, the G-7 foreign ministers will for the first time be joined by their counterparts from the Association of Southeast Asian Nations for an expanded meeting.

The two groups are expected to seek coordination over China's military buildup and assertive territorial claims in the Indo-Pacific region.

Of the 10-member ASEAN, Myanmar will be excluded from the meeting as the country has been thrown into political turmoil following the military coup in February.

Britain, which holds the G-7 presidency this year, is also inviting Australia, South Korea and India for expanded sessions Sunday with the G-7 and ASEAN on security and infrastructure development in the Indo-Pacific, the coronavirus pandemic and gender equality.