Japan and France have started informal talks on a deal that would enhance interoperability and collaboration between the armed forces of both countries, the French ambassador to Japan said Monday.

The early-stage discussion for the so-called Reciprocal Access Agreement comes as Paris has island territories in the Indo-Pacific region, where China's military influence is growing. 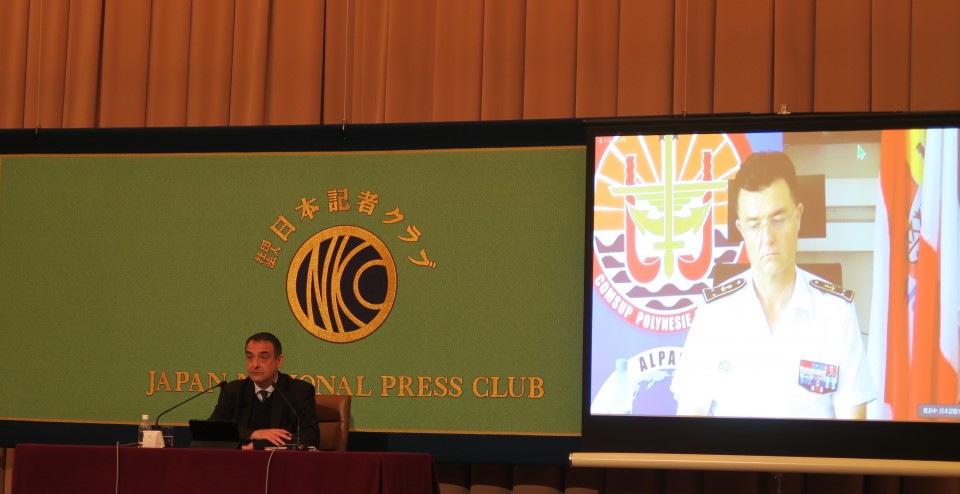 French Ambassador to Japan Philippe Setton (L) attends a press conference with Rear Adm. Jean-Mathieu Rey shown on a screen behind him in Tokyo on Dec. 13, 2021. (Kyodo)

If France enters into official negotiations with Japan, it will become the third country for Tokyo after Australia and Britain. The Japanese Foreign Ministry declined to comment on whether such talks have started.

"We would like to promote bilateral military and defense cooperation (with Japan). That is why we hope to have the Reciprocal Access Agreement, if possible. I think it is an important matter that would facilitate mutual cooperation and enable us to work together in each other's countries," French Ambassador to Japan Philippe Setton said at a news conference.

The Japan Ground Self-Defense Force conducted a large-scale joint exercise with the United States and France for the first time on Japanese soil in May, aiming to deter China's growing military assertiveness.