An elementary school pupil was newly found in Osaka Prefecture to be infected with the Omicron variant of the coronavirus through unknown routes, the local government said Thursday, in a sign that the community transmission of the variant is spreading in western Japan.

The boy is not related to the three family members confirmed Wednesday in Osaka to have been infected with Omicron, Osaka Gov. Hirofumi Yoshimura said in a press conference. 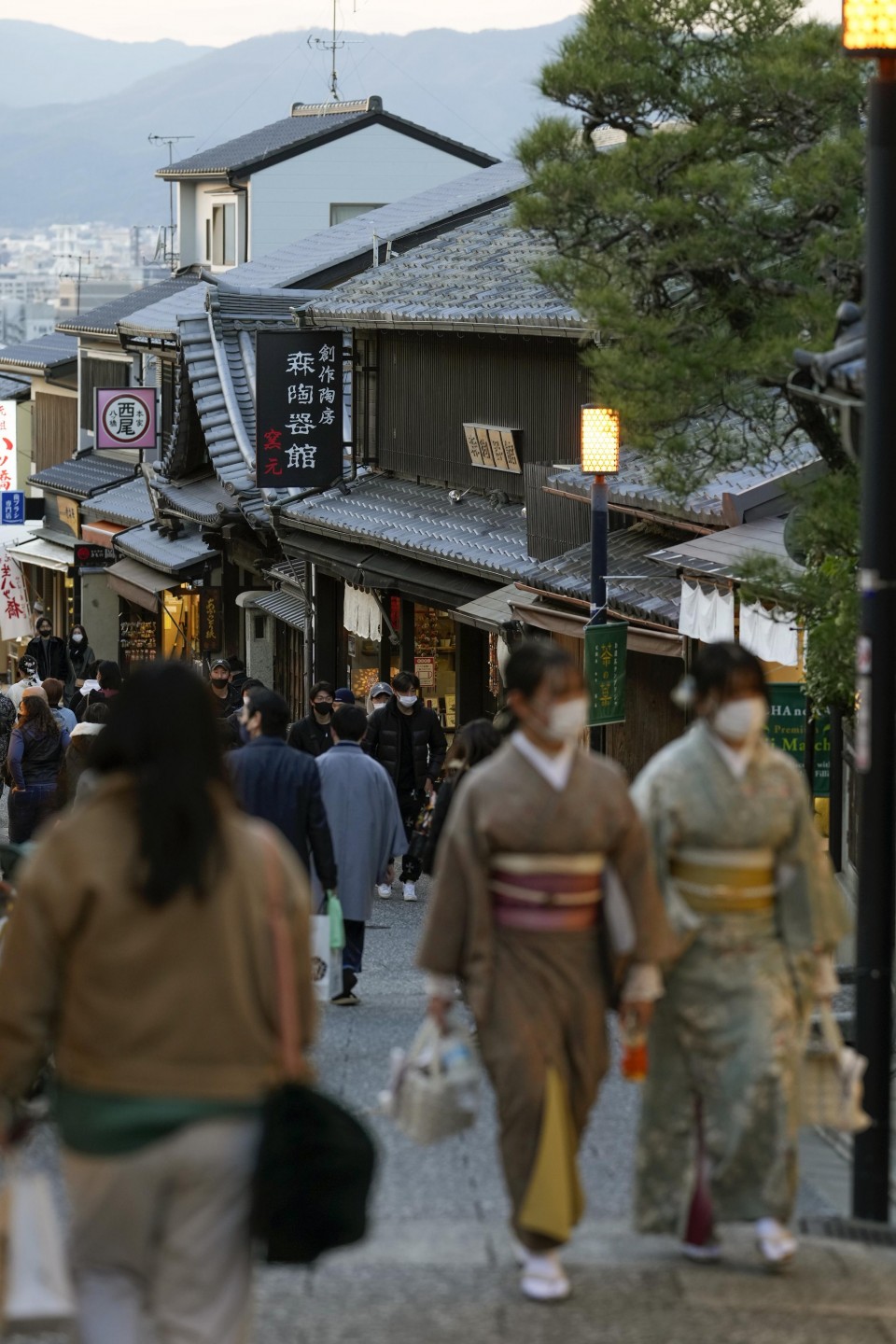 People wearing masks for protection against the coronavirus walk in a sightseeing spot in Kyoto on Dec. 23, 2021. Kyoto Prefecture reported its first community transmission of the Omicron variant the same day. (Kyodo) ==Kyodo

Three of his classmates have also contracted coronavirus and are currently undergoing tests to determine whether they have also been infected with the highly transmissible strain, said Yoshimura.

Shigeru Omi, the country's top COVID-19 adviser, said that while "it is unlikely the variant has become widespread in Japan," such infections have begun spreading "at various locations."

As new cases of Omicron surface in the prefecture, the Osaka government said it will start providing free COVID-19 testing in more than 100 sites from Friday.

In Tokyo, Prime Minister Fumio Kishida said during a gathering that his government will provide free COVID tests in areas where cluster and community transmissions have been detected, and that testing is open to all those who want it and are worried about the latest developments.

Following the first case of a community spread in Osaka, Kishida has said steps will be taken to prevent the spread of cases, as the country braces for a sixth wave of infections.

Earlier in the day, a woman in Kyoto, with no overseas travel history, was reported to have contracted Omicron through untraceable routes.

The woman, in her 20s, exhibited symptoms such as a fever and coughing on Sunday and was admitted to hospital the next day after having tested positive, according to the Kyoto prefectural government.

She has received two vaccination doses and is showing mild symptoms. The prefecture is monitoring seven people as being close contacts of the woman, of whom two have tested negative while the results for the other five were not yet available.

Japanese officials said three family members -- a male elementary school teacher, a woman in her 30s and a girl under 10 years old -- were found to be infected with Omicron through unknown routes.

The three also do not have any history of traveling abroad, with the two adults having received their two inoculations.

Two other members of the family have also contracted COVID-19, and were awaiting the results of genome tests to determine if they have also been infected with the new variant.

Omi urged people to be vigilant during the year-end and New Year holidays, especially in activities such as traveling to hometowns or elsewhere.

"But we plan to respond speedily by working with municipalities and experts by taking infection situations into account," the top government spokesman said during a regular press conference.

At a separate gathering in the Japanese capital earlier in the day, Kishida said, "Using the time we bought through strengthened border controls (since late November), we have accelerated efforts to enhance the process of prevention, testing and early treatment."

Japan banned new entries by foreigners globally from Nov. 30, and the measure will continue at least until early next year as Tokyo seeks to gain more information about the new variant.

Kishida also said he has led efforts to secure enough hospital beds for COVID-19 patients as well as hotel rooms for those found infected with the virus and strengthened cooperation among medical institutions.

After the first Omicron case was confirmed in Japan on Nov. 30 -- a man who arrived from Namibia -- total infections with the new variant nationwide had reached 160 as of Wednesday. But health minister Shigeyuki Goto said the same day he does not believe the variant has become widespread across the country "at this point."

Japan to expand 3-day quarantine to nearly all travelers from U.S.

Japan to keep strict border controls for the time being: PM Kishida