U.S. veterans and survivors gathered at a ceremony in Pearl Harbor on Tuesday to mark the 80th anniversary of the 1941 Japanese attack that brought the United States into World War II, with the two nations stressing how their former enmity has been replaced by a close alliance.

About 800 people, including some 40 survivors, observed a moment of silence at 7:55 a.m., the time the attack began, for around 2,400 U.S. military personnel and civilians who lost their lives during the event organized by the National Park Service and U.S. Navy. 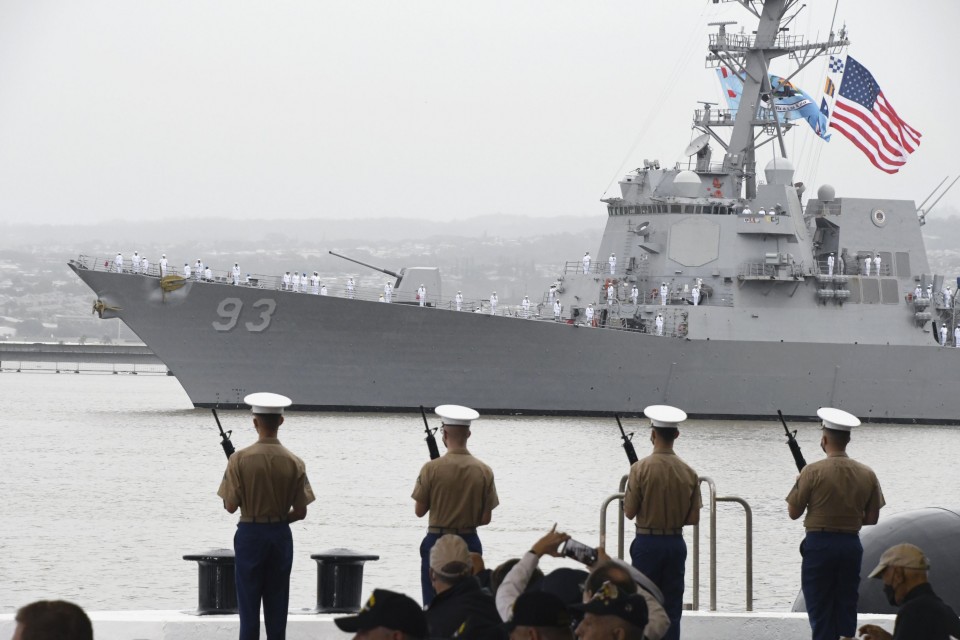 A memorial ceremony is held in Pearl Harbor in Hawaii on Dec. 7, 2021, to mark the 80th anniversary of the Japanese attack on the U.S. naval base there. (Kyodo) ==Kyodo

In an audio message, U.S. President Joe Biden said that while the attack led to "enormous sacrifices we made as a nation and the hard-fought victory by our allies," it was also followed by "decades of diplomacy and international leadership that followed to rebuild a world devastated by war."

He added that it "transformed forever former enemies into close allies" and led to an international order that spurred over seven decades of peace.

Due to the coronavirus pandemic, the memorial was scaled back and only people who received invitations were allowed to attend the event held on a pier at the harbor.

U.S. Secretary of the Navy Carlos Del Toro said in a speech that the attack was not only against the United States, but also "the very future of freedom and democracy around the world." He vowed to carry on the legacies of those who fought for freedom.

In Tokyo on Wednesday, Japanese Chief Cabinet Secretary Hirokazu Matsuno said the anniversary is an "important occasion to look back on Japan-U.S. history to reaffirm the value of the reconciliation between Japan and the United States and renew our determination to never repeat the horrors of war."

"Eighty years on from the outbreak of war between Japan and the United States, these two countries that fought fiercely have forged the strongest alliance in the world," Matsuno said, adding the bilateral alliance is becoming increasingly significant as Japan faces a harsh security environment.

With the world facing issues such as the coronavirus pandemic and climate change, Japan "believes it is most important to respond by closely working together while carrying on the memories of the past war," he said.

In Washington, Biden went to the World War II monument with first lady Jill Biden to offer prayers. The president saluted in front of a wreath at the memorial, while the first lady touched it and bowed her head. 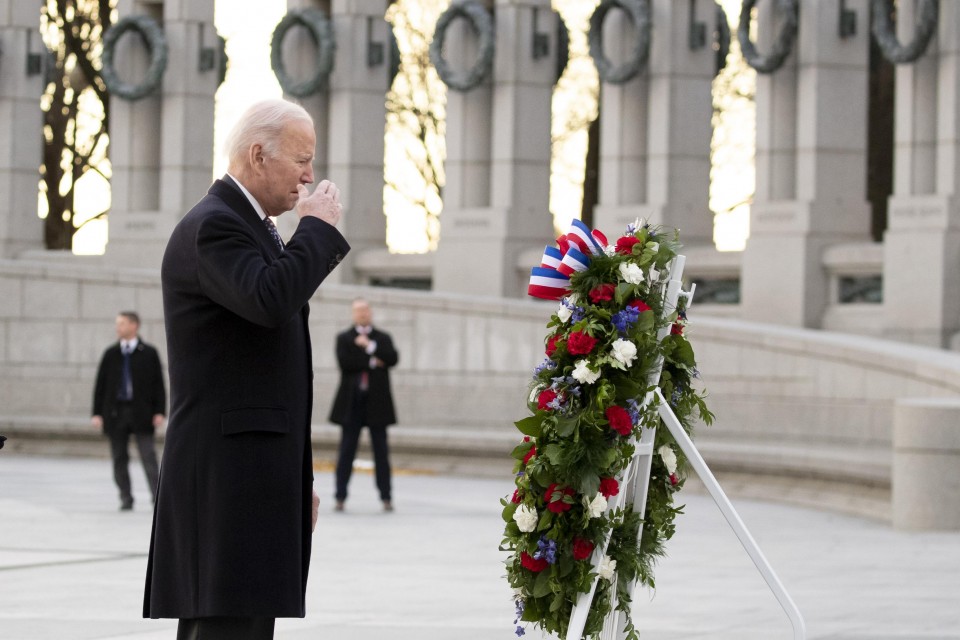 U.S. President Joe Biden salutes to pay his respects at the World War II Memorial on the 80th anniversary of the attack on Pearl Harbor on Dec. 7, 2021, in Washington. (UPI/Kyodo)

Yuji Sasaki, nephew of one of the most widely known victims of the 1945 U.S. atomic bombing of Hiroshima, emphasized the importance of peace as he visited Hawaii for the anniversary of the Pearl Harbor attack, although he could not attend the ceremony.

"It is my first time being here on Dec. 7 so I feel the Pearl Harbor attack more closely. On the occasion of the 80th anniversary, I would like to work hard to connect Pearl Harbor and Japan," the 51-year-old said.

Sasaki is a nephew of Sadako Sasaki, who died 10 years after the bombing at the age of 12 of radiation-induced leukemia and was known for the paper cranes she continued to fold until her death.

Eighty years ago, the Japanese military conducted a surprise attack against the U.S. naval base and battleships at Pearl Harbor that led to the United States declaring war the following day.

The attack sank the Arizona and other U.S. battleships. Approximately 60 Japanese combatants are believed to have died in the attack.