Japanese Prime Minister Fumio Kishida on Monday vowed to "prepare for the worst" in dealing with the Omicron variant of the coronavirus while still moving swiftly to get the economy back on track.

In a policy speech marking the start of an extraordinary parliamentary session, Kishida also voiced hope for further debate on constitutional revision and pledged to conclude a sweeping review of security policy in about a year.

While the coronavirus situation in Japan has significantly improved, Kishida warned of "new risks including the confirmation of the Omicron variant across a number of countries." 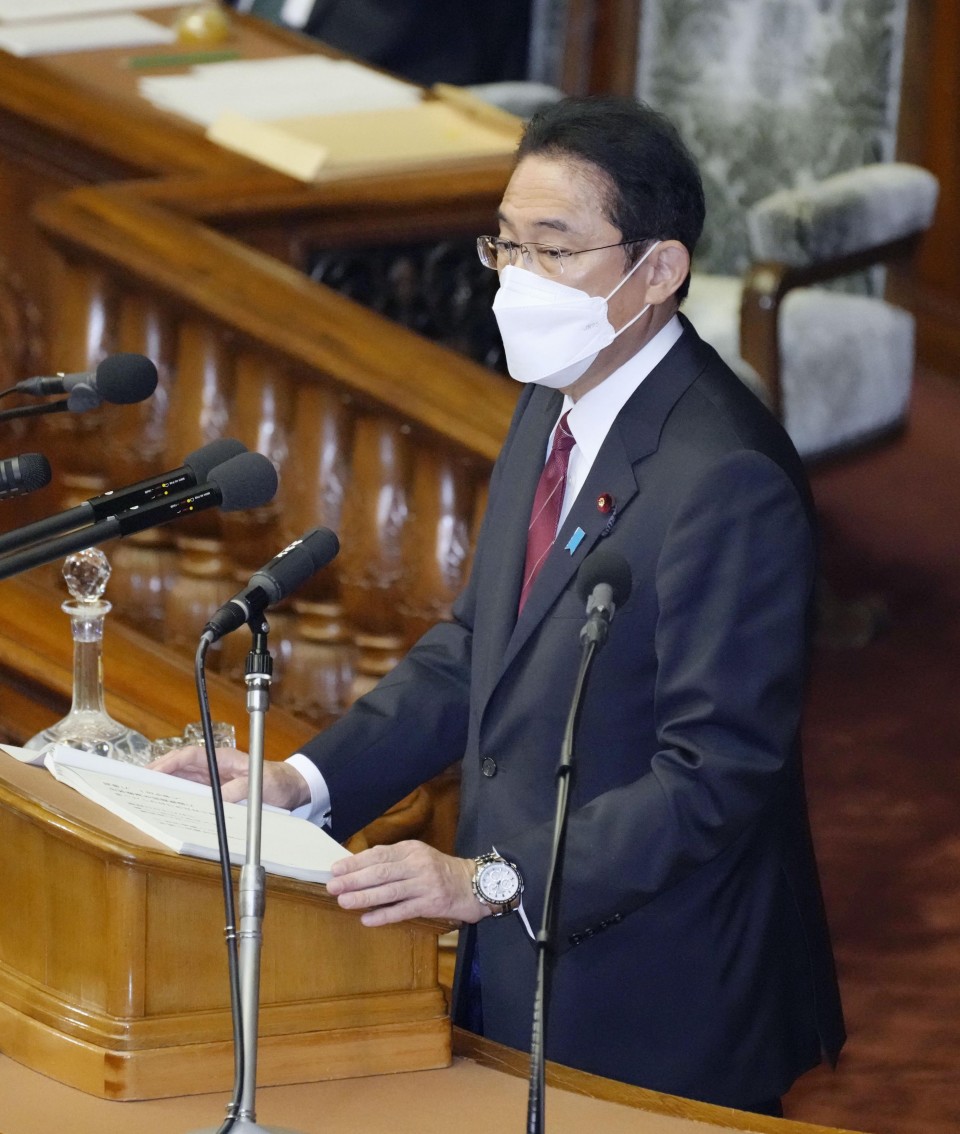 Prime Minister Fumio Kishida delivers his policy speech at the House of Representatives chamber in the parliament in Tokyo on Dec. 6, 2021. (Kyodo)

"We will maintain our stance of being cautious and prudent," the prime minister said, adding Japan has added 10,000 hospital beds for COVID-19 patients since the summer and expects to approve the use of an oral drug to treat the disease later this month.

Infections in Japan have plunged recently, with just 115 new cases reported on Sunday compared with more than 25,000 daily at the peak of the previous wave caused by the Delta variant in the summer.

"The time to repair the roof is when the sun is shining," Kishida said, quoting U.S. President John F. Kennedy's 1962 State of the Union address.

Kishida also reiterated his government will shorten from its previous timeline of eight months the period between which people can receive their second vaccine shot and become eligible for a booster.

Regarding the decision to ban new entries of foreigners into Japan to prevent the introduction of the Omicron variant, which has sparked some backlash as being overly restrictive, the prime minister said he is "ready to accept criticism that I'm being too cautious before we have an adequate grasp of the situation."

The policy speech was Kishida's second, and first since he led his Liberal Democratic Party and its junior partner Komeito to victory in the Oct. 31 House of Representatives election. He gave it while looking to create a list of achievements to campaign on ahead of the House of Councillors election scheduled for next summer.

In the address, the prime minister vowed to protect businesses and workers hit hard by the pandemic through an enormous stimulus package, funded mostly with a record 36.0 trillion yen ($319 billion) fiscal 2021 supplementary budget expected to be passed by parliament during the extraordinary session.

He also said the government will start issuing on Dec. 20 digital certificates for people who have been fully vaccinated against COVID-19.

On constitutional reform, Kishida said lawmakers "have a responsibility to seriously consider" whether or not to amend the supreme law, written under the Allied occupation of Japan after World War II, which took effect in 1947.

"In a time of rapid change, we should spark wide debate among the public on whether the current Constitution is fitting for today," he said.

On the diplomatic front, the prime minister vowed to strengthen Japan's alliance with the United States, calling it the foundation for peace and prosperity in the Indo-Pacific region, and voiced eagerness to visit the United States soon for a summit with President Joe Biden.

With China's increasing assertiveness in surrounding waters and the recent resumption of ballistic missile tests by North Korea, Kishida said the security environment around Japan is "quickly becoming more severe" and vowed to consider "every option" to boost defense, including acquiring the capability to strike enemy bases.

The government will spend about a year drawing up new versions of three key documents -- the National Security Strategy, National Defense Program Guidelines and Medium Term Defense Program -- he said.

Repeating his promise to promote a "new capitalism" that not only sparks growth in the world's third-largest economy but also redistributes wealth to the middle class, Kishida said the government will "drastically" increase tax incentives for firms to raise wages.

As part of his drive to revitalize regional economies through the use of digital technology, he said his government will lay underwater cables around Japan that will form a "super highway" for high-speed internet, an undertaking that will take around three years.