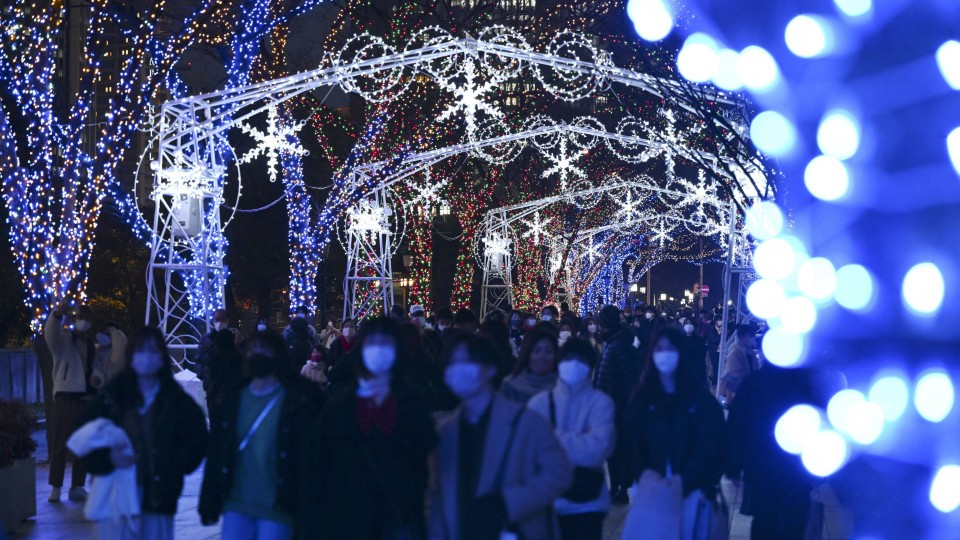 People wearing masks for protection against the coronavirus walk on an illuminated street in Osaka on Dec. 24, 2021. (Kyodo) ==Kyodo

TOKYO - Prime Minister Fumio Kishida is considering attending a January meeting in New York to review the Treaty on the Non-Proliferation of Nuclear Weapons, sources familiar with the plan said Saturday.

National leaders usually do not take part in an NPT Review Conference, the latest of which will start on Jan. 4, and whether Kishida will actually do so is uncertain due to surging cases of the Omicron variant of the novel coronavirus in the United States.

TOKYO - Global venture capital investment is on course to double this year from 2020 to a record high of more than $580 billion, driven by investor interest in online services in the health care, financial and retail sectors spurred by monetary easing in major economies, according to data from a U.S. research firm.

TOKYO - A group of people who purchased condominiums to be converted from the athletes village for the Tokyo Olympics and Paralympics have taken the developers to court, saying they will incur additional costs due to a prospective one-year delay in the handover of the properties.

In the lawsuit filed with the Tokyo District Court on Friday, the 29 plaintiffs are demanding that Mitsui Fudosan Co. and the other developers of the condominiums hand over the properties by March 2023, as stipulated in their contracts, or pay them a total of 80 million yen ($700,000) in compensation.

TOKYO - Japan's record budget plan for fiscal 2022 has laid bare the urgent need to have real discussions about how to restore its debt-ridden finances, but the chance of seeing them anytime soon seems very slim, at least until the House of Councillors election scheduled for July next year.

The draft budget, approved Friday by the Cabinet of Prime Minister Fumio Kishida, totals 107.60 trillion yen ($940 billion), marking a record high for 10th straight year, while there are deep-seated concerns that the government may spend more in the fiscal year starting in April through extra budgets, as in recent years.

NEW YORK - The United States, China and Japan will remain the top three contributors to the United Nations budget for the 2022-2024 period, with Beijing's share expanding while Tokyo's declines in the plan adopted by the General Assembly on Friday.

The United States will account for 22.0 percent of the general budget for the upcoming three-year period, the upper limit for one member economy, followed by China at 15.25 percent and Japan at 8.03 percent.

WASHINGTON - The United States will lift a travel ban it imposed on eight southern African countries in late November due to concerns over the Omicron variant of the coronavirus that was first detected in the region, a White House official said Friday.

The travel restriction, which will be lifted on Dec. 31, was put in place to buy time to better prepare for the potential spread of the emerging variant, about which little was known at the time.