The number of consultations from people facing financial difficulties in Japan more than doubled in the first half of fiscal 2021 from the prepandemic level in 2019, according to preliminary data compiled by the welfare ministry.

The sharp increase in the April-September period apparently reflects rising numbers of consultations from those who lost their jobs or suffered pay cuts in a fifth wave of coronavirus infections this past summer. 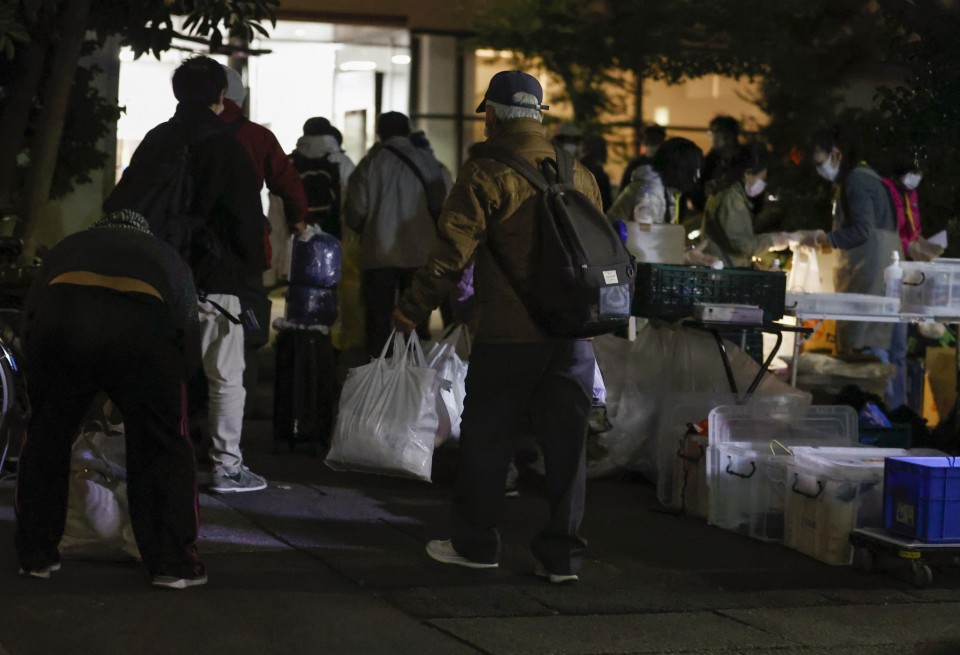 People in need are given free food bags by a non-profit organization at a park in Tokyo's Ikebukuro area on Oct. 23, 2021. (Kyodo) ==Kyodo

Welfare offices designated by about 900 municipalities across the country received a total of 307,072 consultations in the given period, up from 124,439 in the corresponding period in 2019, according to the Ministry of Health, Labor and Welfare.

During the fifth wave, Japan logged a record number of COVID-19 cases, prompting the government to issue a fresh state of emergency in several prefectures.

About 43,000 people had been laid off or had their employment terminated this year due to the pandemic, according to government data.

With the number of infections of the Omicron variant rising, the ministry has called for local authorities to offer support to people in need, such as helping them find accommodation, even during the year-end and New Year holiday when many public facilities close.

While the latest figure was down from the first half of fiscal 2020 and the employment situation has been showing signs of improvement, lodging and restaurant businesses that hire many female and nonregular workers are still being hit heavily by the virus.

Municipalities handle requests for advice from people in need via welfare offices as safety net measures before they require livelihood protection by authorities.

"We have seen an apparent increase in the number of consultations from women," said Koichi Kurosawa, a senior official at the National Confederation of Trade Unions that represents about 1.2 million workers in Japan.

National Police Agency data showed that while the number of suicides among men decreased in 2021 from a year earlier, the number of women taking their lives has stayed at the same level.

A Tokyo-based nonprofit organization that caters to people in poverty said it has seen more people seeking food compared with last year as the pandemic forced them to use up their savings or hit them mentally.

"There are people who do not understand they are eligible to receive support because they have never experienced falling into poverty before," said Ren Onishi, head of the NPO Moyai.