North Korean leader Kim Jong Un may struggle over the next 10 years to rebuild the country's economy hit hard by the COVID-19 pandemic, after he tried to cement his authority at home for the past decade since becoming the supreme leader.

Kim Jong Un, who effectively inherited power following the death of his father, Kim Jong Il, on Dec. 17, 2011, is also likely to step up efforts to maintain the family dynasty that has continued since North Korea was established in 1948, backed by the Soviet Union. 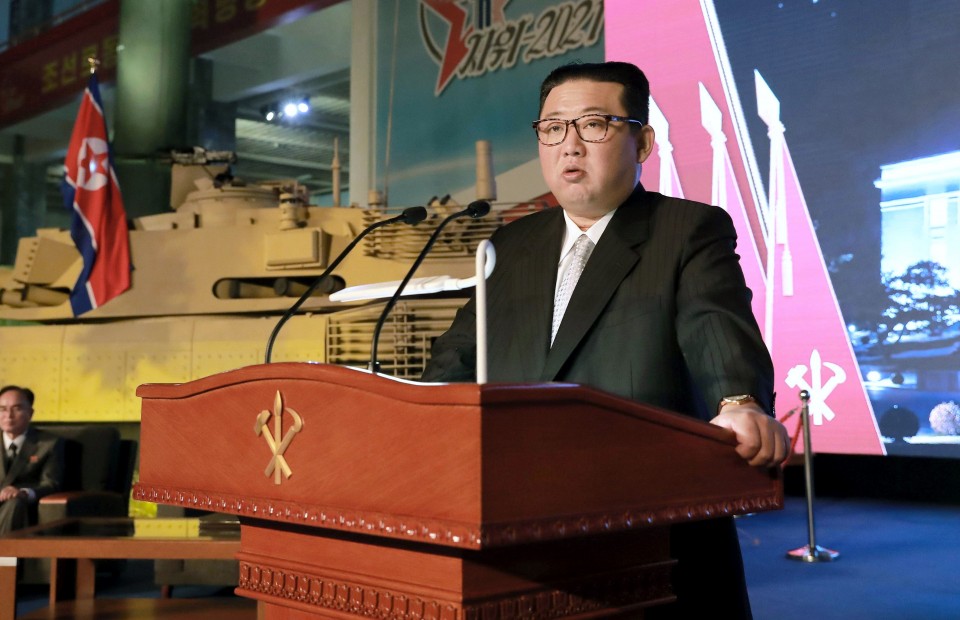 North Korean leader Kim Jong Un delivers a speech during the opening ceremony of the Defence Development Exhibition in Pyongyang on Oct. 11, 2021. (KCNA/Kyodo)

The current leader, a grandson of the nation's founder, Kim Il Sung, has "failed to make achievements on the economic and diplomatic fronts for the last 10 years," a source familiar with the situation in North Korea said.

Kim Jong Un, however, has "successfully gained control of North Korea by repeatedly purging top military brass and ruling party executives and paved the way for doing what he wants to do. I had thought his regime could collapse within five years," the source said.

"What he would do next is to restore North Korea's economy that has become very stagnant in the wake of the outbreak of the novel coronavirus, while looking for his successor in case he has a health problem," he added.

In his first public speech as the supreme leader in April 2012, Kim Jong Un pledged to ensure that the people "will never have to tighten their belts again," showing his intentions to tackle poverty through adequate food provision and revitalize the sluggish economy.

With the leader promising to build a "self-reliant economy," a North Korean man living in Pyongyang told Kyodo News in 2018 that the country had become one that can domestically produce 70 to 80 percent of foods, cosmetic products, beverages and other daily necessities.

Nevertheless, North Korea's economy, which had been already weighed down by international sanctions aimed at thwarting its ballistic missile and nuclear ambitions, has lost growth momentum since the coronavirus started to rage globally in early 2020. 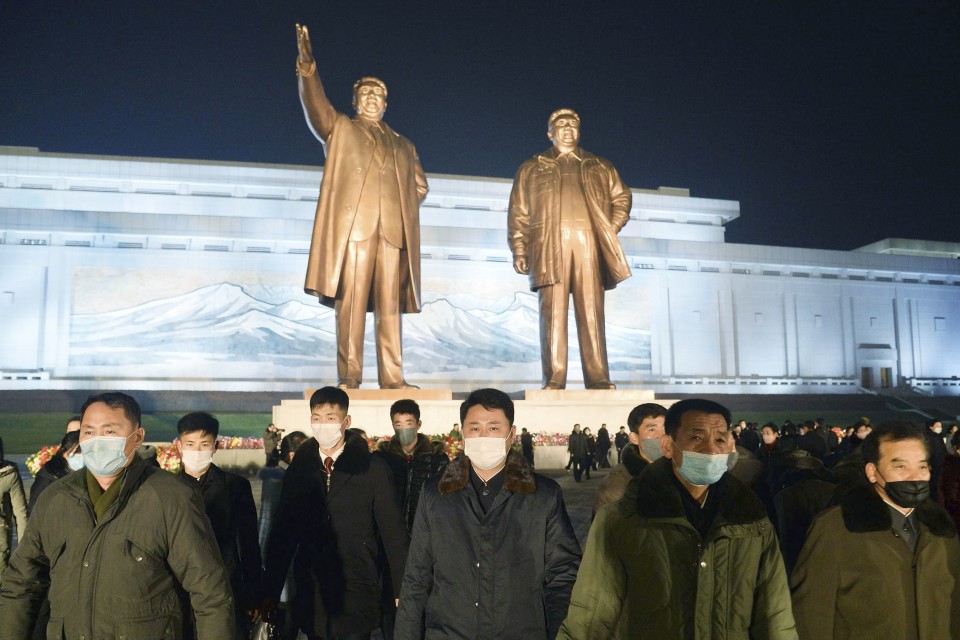 People visit Mansu Hill in Pyongyang on Dec. 16, 2021, a day ahead of the 10th anniversary of the death of North Korean leader Kim Jong Il. Statues of North Korea's founder Kim Il Sung (L) and his son Kim Jong Il can be seen in the background. (Kyodo) ==Kyodo

Although North Korea claims no infection cases have been found in the nation, it has cut off land traffic to and from its neighbors for around two years in a bid to prevent the intrusion of the virus, first detected in the central Chinese city of Wuhan in late 2019.

The traffic restrictions have choked North Korea's trade with China, taking a heavy toll on the broader economy. North Korea relies on China -- its neighbor as well as closest and most influential ally in economic terms -- for over 90 percent of its trade.

Earlier this year, North Korea said in a report to the United Nations that the Asian country has faced its worst food crisis in more than a decade, sparking fears that its citizens have encountered serious difficulties in obtaining essentials for life.

In January, Kim Jong Un acknowledged at the first congress of the ruling Workers' Party in nearly five years that North Korea failed to accomplish the economic development goals set in its strategy through 2020 in almost all sectors.

Kim Jong Un has been unable to promote negotiations with the United States over denuclearization and sanctions relief even since President Joe Biden took office in January, while showing few signs of ending the border blockage in a full-fledged manner anytime soon.

North Korea, meanwhile, has steadily advanced its weapons technology, helping Kim Jong Un, often regarded as ruthless as he ordered the execution of his once-powerful uncle Jang Song Thaek for treason in 2013, bolster his clout in the nation, pundits said.

In November 2017, North Korea fired what it said was its "most powerful" intercontinental ballistic missile capable of delivering a nuclear warhead anywhere in the continental United States, and Kim Jong Un declared the completion of "the state nuclear force."

North Korea also said earlier this year that it has developed hard-to-intercept missiles with state-of-the-art technologies, including ballistic ones.

South Korea's government said the phrase "Kimjongunism" has begun to be used in official circles in Pyongyang recently.

Despite being disturbed by the pandemic, Kim Jong Un "would accelerate his attempt to attain his cherished goal of building a powerful socialist economy for the next 10 years, now that he has certainly consolidated power at home," a diplomatic source said.

"He can also reinforce the foundations of his family's rule by invigorating the country's economy," the source said, adding, "All eyes are on who would take over from Kim Jong Un if anything happens to him."

North Korea watchers said Kim Yo Jong, a younger sister of Kim Jong Un, is seen as the frontrunner, given that North Korea's sacred "Mt. Paektu bloodline" is believed to give the right to take the helm of the nation only to direct descendants of the founder.

South Korea's spy agency has said Kim Jong Un, who is in his late 30s, has three children with his wife Ri Sol Ju, a former singer and cheerleader, and that one of them is a boy.

But the watchers said Kim Jong Un's son is still too young to rule the country and until he grows up, Kim Yo Jong, who has been apparently in charge of diplomacy toward the United States and South Korea, is expected to succeed Kim Jong Un.

Some analysts point out that Kim Yo Jong, a close aide to the incumbent leader, has started to share duties with Kim Jong Un so that he can concentrate on running the nation.