Japan's first World Cup captain Masami Ihara expects a solid backline led by his protege, Arsenal's Takehiro Tomiyasu, to be vital for his country's success should they reach next year's finals in Qatar.

Having seen Japan make huge strides since their tournament debut in 1998 with an entirely J-League-based side, the 54-year-old Ihara believes the current manager, his former Japan teammate Hajime Moriyasu, has players with the best potential yet.

The Samurai Blue's World Cup history began 23 years ago in Toulouse, France, where the all-round center-back Ihara led his team out against one of the tournament's favorites in Argentina. 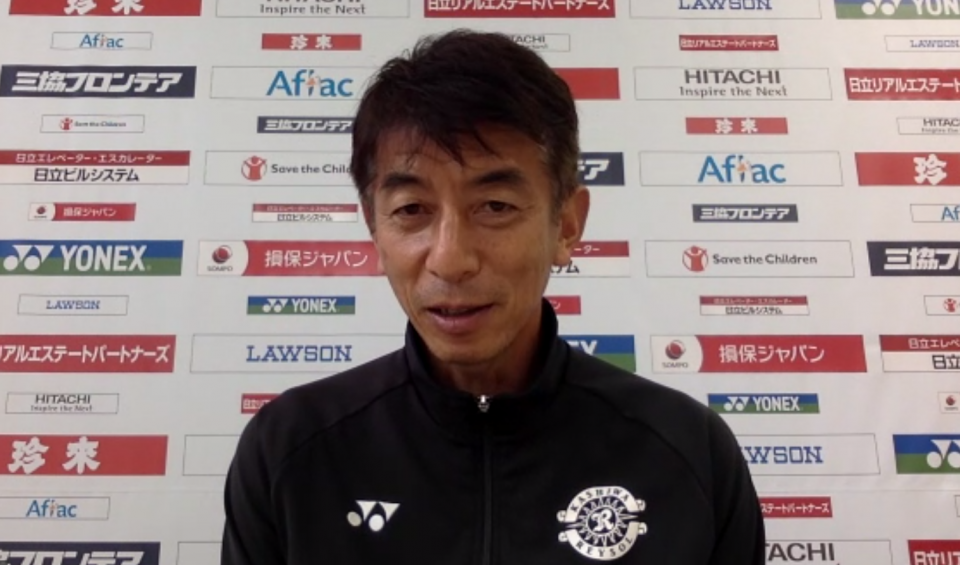 While he had already faced their prolific marksman Gabriel Batistuta in international matches in 1992 and 1995, Ihara and his teammates were venturing into the unknown of playing the world's elite on the biggest stage.

The Fiorentina forward pounced on a defensive mistake in the opener, while another promising performance in the next game against Croatia was undone when the tournament's top scorer, Davor Suker of Real Madrid, struck late to seal Japan's exit.

"It was difficult to picture what it would be like playing against them at the World Cup finals. I was trying not to be overwhelmed by their names," Ihara, whose 122 caps are the third highest among Japanese, told Kyodo News recently.

"We knew they would punish us if we allowed them the slightest amount of time and space, but we hadn't faced such players in a real high-pressure game and playing them straight away had us feeling our lack of experience." 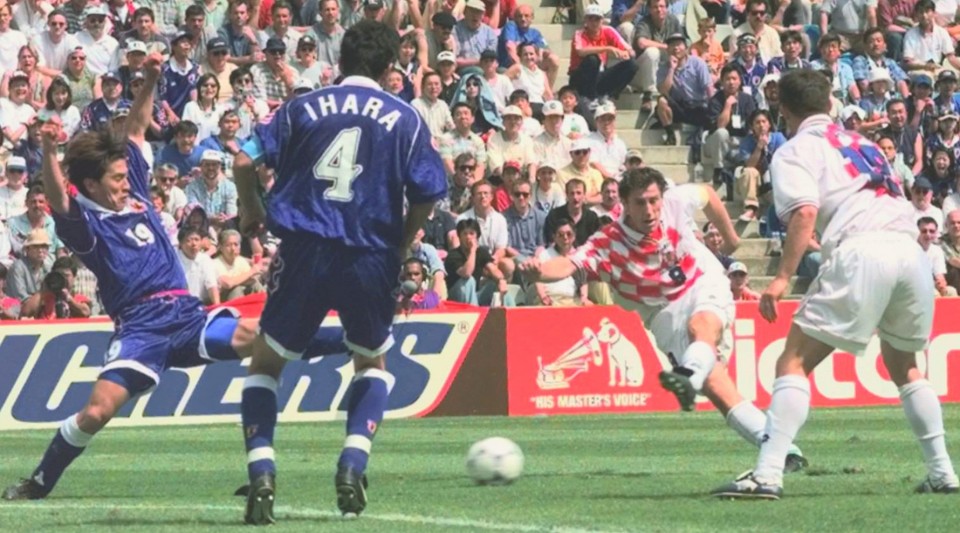 Hidetoshi Nakata's success in Italy in the following seasons created a market for Japanese players at European clubs, first for those further up the pitch. Two decades on, Japan's center-backs are squaring off against the world's very best on a weekly basis.

Initially deployed in defensive midfield, Tomiyasu was still thin and losing out in physical battles without fully using his height advantage, but that changed as he matured physically.

"He continued to develop thanks to his character, staying stoic to elevate himself and voraciously wanting to be better," said Ihara. "He could hit long balls with both feet up or across the field and his touches were already at a really high level." 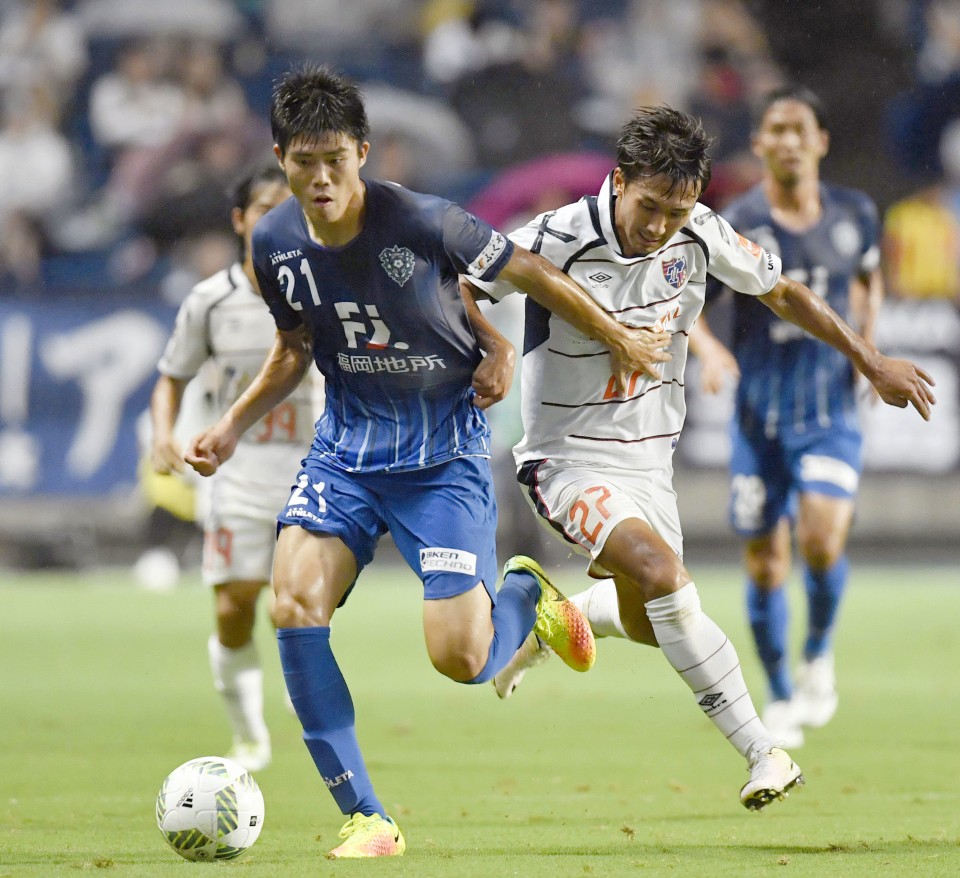 Avispa Fukuoka's Takehiro Tomiyasu (L) vies for the ball with FC Tokyo's Sotan Tanabe during a J-League Cup quarterfinal on Sept. 4, 2016 at Level-5 Stadium in Fukuoka.(Kyodo)

Following a season each in the J1 and J2, Tomiyasu left for Belgium's Sint-Truiden in January 2018 aged 19. He was picked up by Italian Serie A side Bologna 18 months later before making a deadline-day move to Arsenal this summer.

"No way I imagined it," Ihara said with a smile on the rapid rise of Tomiyasu, whom he remains in regular contact with.

After finding a new position in right-back at Bologna under Sinisa Mihajlovic, Tomiyasu has become a regular in the same position under Mikel Arteta, continuing to earn plaudits in his debut English Premier League season.

"He played on either side of a three-man defense at Fukuoka before playing in the center toward the end. His running ability was outstanding," Ihara said. "He isn't that fast like (Japan forward) Daizen Maeda but still has plenty of pace."

"His quality in the final third is improving too (at Arsenal). He's playing center-back when he's back with the national team, I reckon it's really difficult to make that switch inside his head but I'm amazed he's doing it nonchalantly."

Tomiyasu's move to Belgium was driven by his desire to make the Tokyo Olympic team, but he became a full international before that in October 2018 thanks to Moriyasu, who doubled as the Olympic manager. 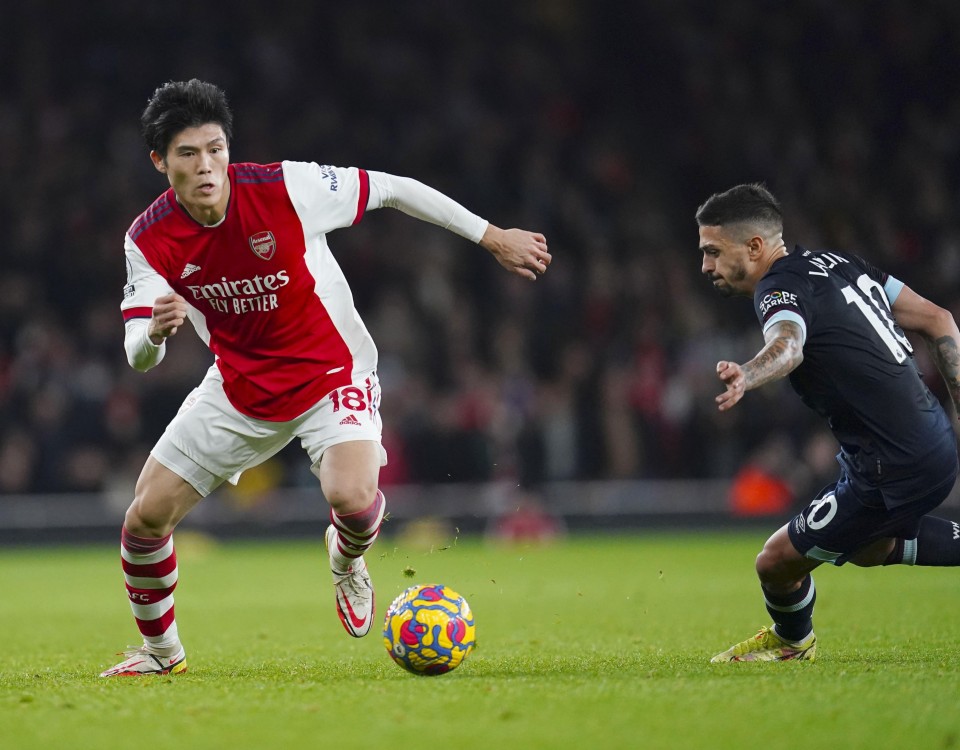 Arsenal's Takehiro Tomiyasu (L) vies for the ball with West Ham's Manuel Lanzini during an English Premier League game on Dec. 15, 2021 at Emirates Stadium in London. (For editorial use only)(Kyodo)

Ihara knows a thing or two about the 53-year-old former defensive midfielder, whom he shared the pitch with during Japanese football's most devastating setback.

Japan were minutes away from booking their first-ever World Cup berth in October 1993 in Doha. Their dream was crushed when Iraq scored a stoppage-time equalizer from a short corner to end the game 2-2 and knock Japan out on goal difference.

Now in the national team hot seat, Moriyasu has drawn widespread criticism for sticking to similar starting lineups and overlooking on-form players -- Celtic forward Kyogo Furuhashi the prime example -- despite a string of insipid performances in the final qualification round.

But on top of having a place in the finals at stake, Ihara believes the cautious approach is even more understandable amid the unprecedented backdrop of a global pandemic.

Just as the number of Europe-based Japanese players has grown more than ever to bolster his options, COVID-19 restrictions have given Moriyasu less time to tune his team up and virtually no room to take a punt. 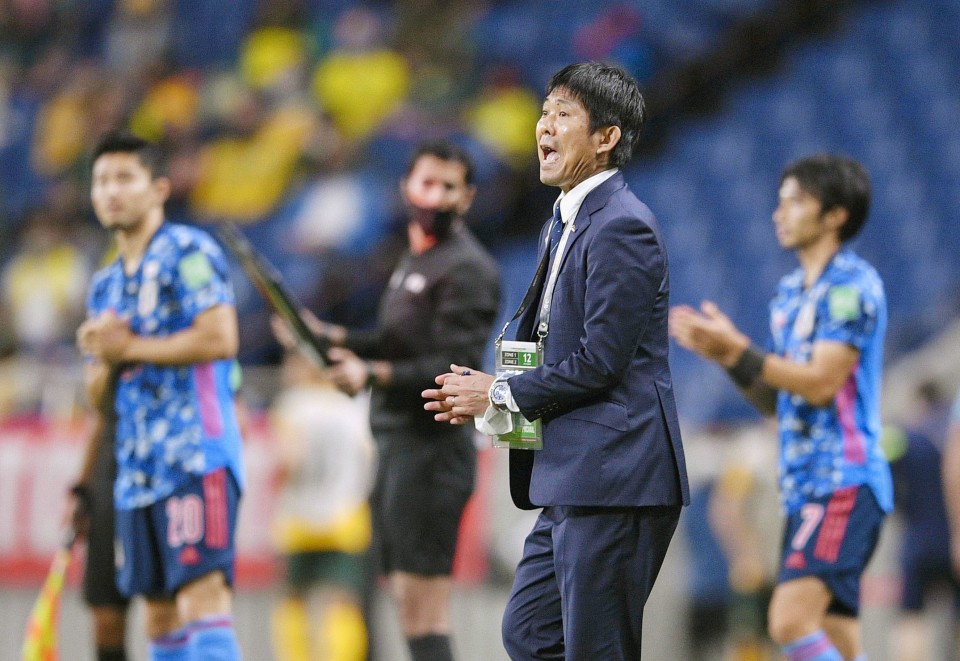 "Of course it's best to use all the on-form players, play wonderful football and win games. But I'm sure he and all the staff chose the best players and tactics possible," Ihara said.

"There'd be pressure, something massively different from his playing days, but he's showing none of it. From a managerial perspective and as a former teammate, he's not bowing to it, just staying calm and going about his business with dignity."

With the pair racking up minutes against top strikers in two of the world's best leagues, Ihara knows their presence will prove crucial once they reach the World Cup finals.

"There will definitely be a sense of security and stability emanating from having those two. They will have a huge impact on the team mentally," he said.

"With most teammates also playing in Europe, it'll be easier for the team to play the way they want in the finals where the intensity will be similar." 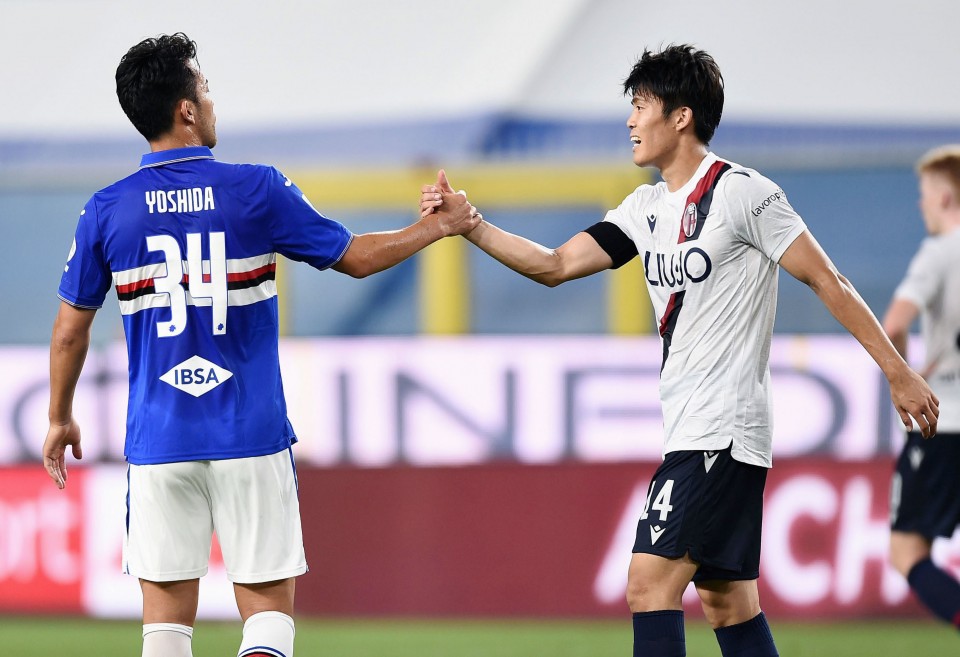 Bologna's Takehiro Tomiyasu (R) shakes hands with Sampdoria's Maya Yoshida after a Serie A game on June 28, 2020, at Stadio Comunale Luigi Ferraris in Genoa, Italy. (For editorial use only)(Kyodo)

Japan have played in the last six World Cups, alternating between group stage exits and reaching the last 16.

Reverentially called by Japan fans "the Wall of Asia" in the days qualifying from the continent was the prime objective, Ihara hopes Tomiyasu can help Japan reach a coveted quarterfinal berth before going on to earn his own, resounding nickname.

"I believe the current team have the biggest chance of doing that. With Maya's age, this could also be the last World Cup where he and Tomiyasu form the center of defense," Ihara said.

"Tomiyasu has the potential to be the 'Wall of the World,' one of the top defenders around. I hope he wins the daily battles at his tough, competitive club and brings what he learns back to the national team."