Hosting the Tokyo Olympics and Paralympics amid the coronavirus pandemic has been picked as the top domestic news story of 2021 by senior editors of Kyodo News and its member or subscriber newspapers and broadcasters.

(1) The Tokyo Olympics and Paralympics held behind closed doors

The Tokyo Olympic and Paralympic Games, postponed for a year due to the coronavirus pandemic, were mostly held behind closed doors to stem the spread of infections.

Amid concern among the Japanese public over staging the Summer Games during the pandemic, when the capital and other parts of the country were under a COVID-19 state of emergency, Japanese athletes excelled by winning a total of 58 medals, including a record 27 gold, in the Olympics and 51 medals, including 13 gold, in the Paralympics. 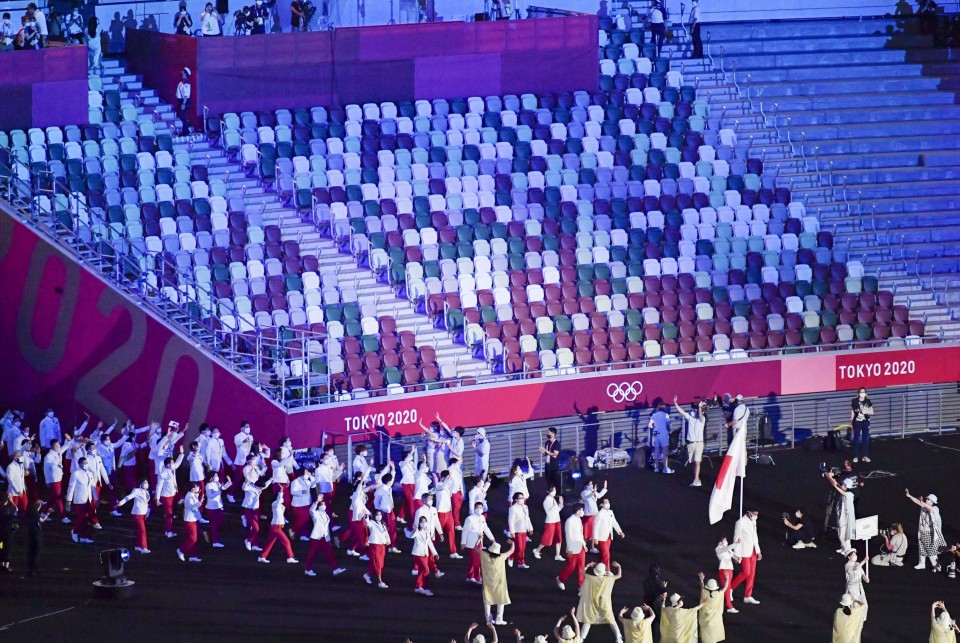 Japan's delegation marches during the opening ceremony of the Tokyo Olympics held behind closed doors at the National Stadium on July 23, 2021, in Tokyo. (Kyodo)

The Japanese government imposed a fourth state of emergency, during which establishments serving alcohol were asked to halt businesses, on Tokyo to stem the spread of the coronavirus infections in July, following the first one declared in April 2020. In August, the number of new coronavirus cases topped 25,000 a day at one point. 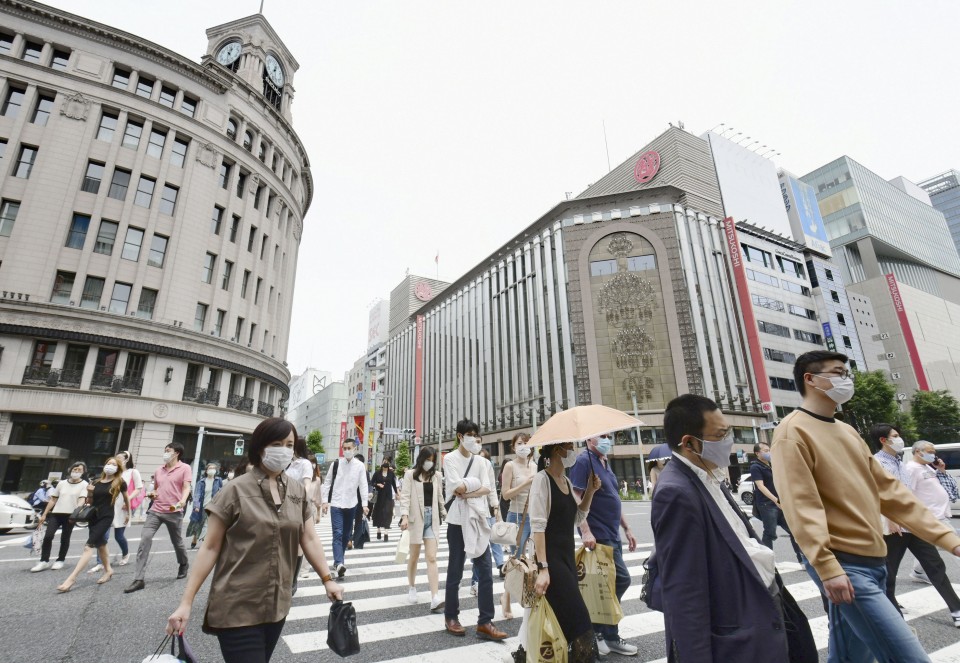 People wearing face masks walk on a crossing in Tokyo's Ginza area on May 29, 2021, as a COVID-19 state of emergency remains in place in the capital. (Kyodo)

Prime Minister Yoshihide Suga abruptly said Sept. 3 he would step down from office as his Cabinet suffered low approval ratings due to their inability to contain the spread of coronavirus infections. Fumio Kishida became the country's 100th prime minister after prevailing in a presidential run-off of the ruling Liberal Democratic Party on Sept. 29, launching his first Cabinet on Oct. 4. 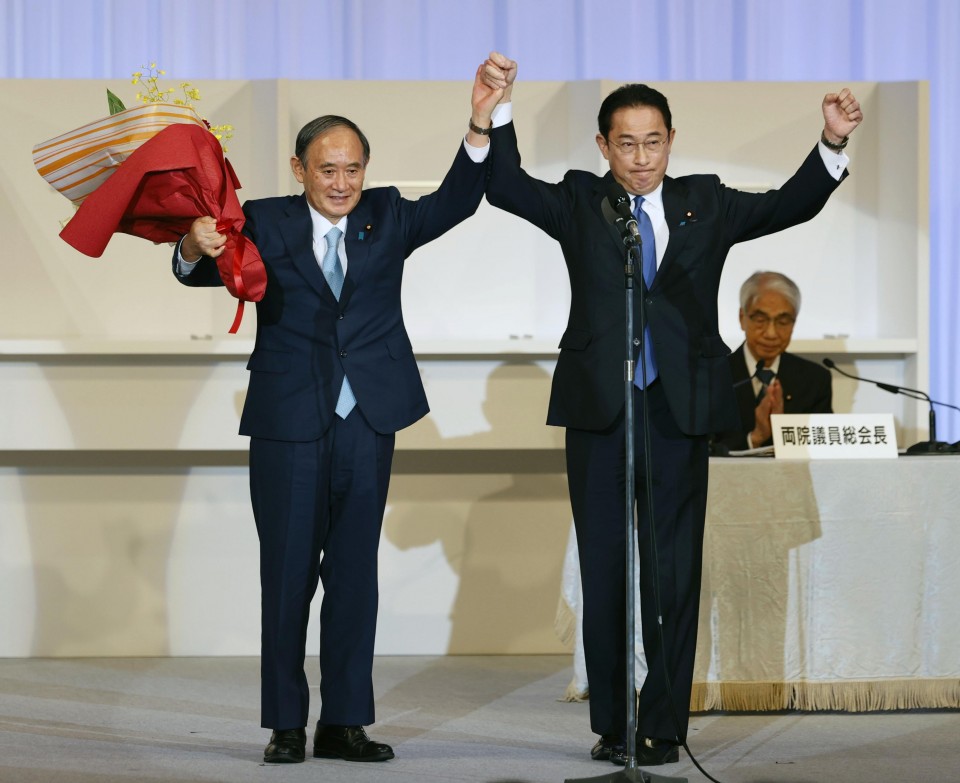 The so-called "fifth wave" of infections led by the spread of the highly transmissible Delta variant of the coronavirus put a strain on the country's health care system. Cases of COVID-19 patients who were not admitted to hospitals rose due to a shortage of hospital beds. In Chiba Prefecture, east of Tokyo, a newborn died as its mother, who was infected with the virus, was unable to find a hospital. 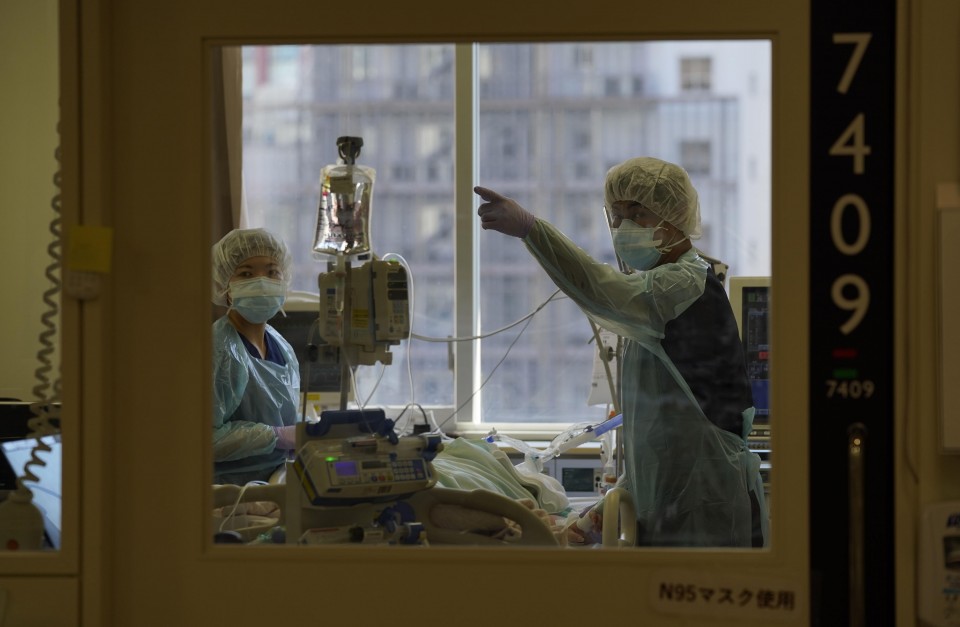 Nurses take care of a COVID-19 patient with severe symptoms inside an enclosed room at Tokyo's Juntendo University Hospital on Aug. 6, 2021, with the virus remaining rampant in the capital. (Kyodo)

Japan's ruling Liberal Democratic Party secured 261 of the 465 seats in the House of Representatives, enough to effectively control all standing committees, in the general election on Oct. 31. Prime Minister Fumio Kishida launched his second Cabinet on Nov. 10. 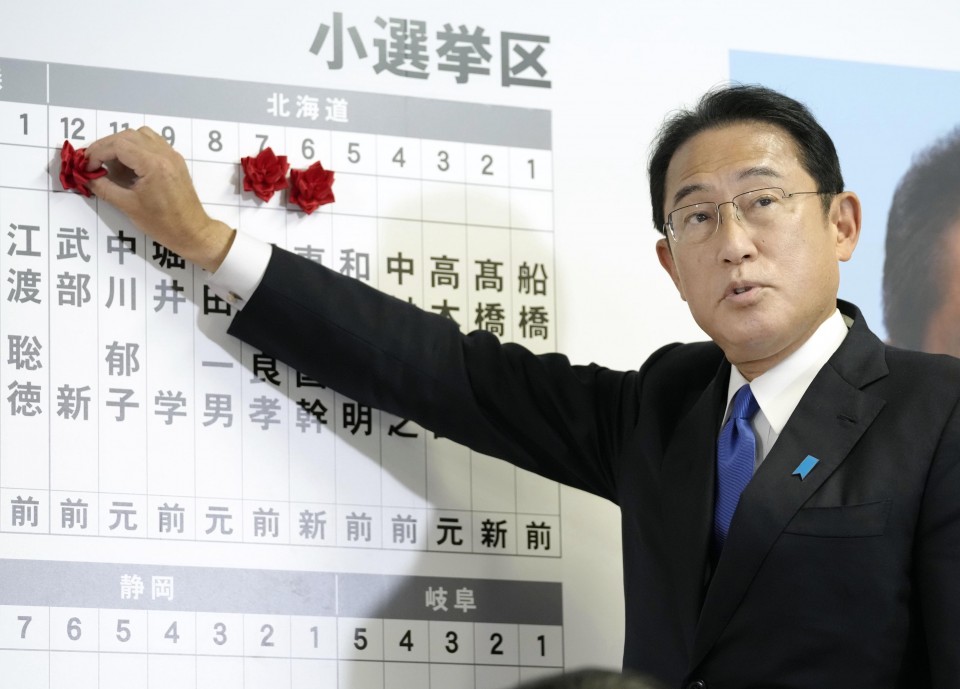 Japanese Prime Minister Fumio Kishida attaches a rosette in Tokyo to the name of a Liberal Democratic Party candidate assured of victory in the House of Representatives election on Oct. 31, 2021. (Kyodo)

On March 11, Japan marked the 10th anniversary of the massive earthquake and tsunami disaster that devastated northeastern Japan. More than 18,000 people died or went missing because of the disaster, which triggered a nuclear accident at a power plant in Fukushima Prefecture. About 40,000 people still live away from their homes after the meltdown at the Fukushima Daiichi nuclear power plant. 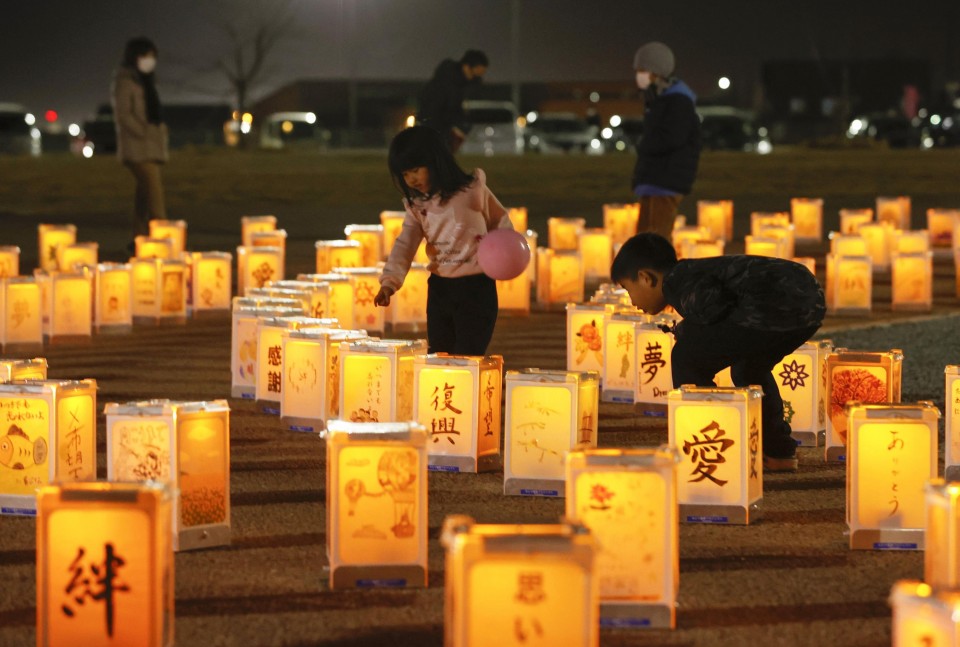 Children look at lanterns during a memorial event in Natori, Miyagi Prefecture, on March 11, 2021, the 10th anniversary of the earthquake-tsunami disaster that devastated the northeastern Japan city. (Kyodo)

Princess Mako, a niece of Emperor Naruhito, married her commoner boyfriend Kei Komuro on Oct. 26 after years of controversy over a financial dispute involving Komuro's mother that led the couple to forgo traditional ceremonies associated with a royal marriage. The newlyweds left Japan to start a new life in the United States in November. 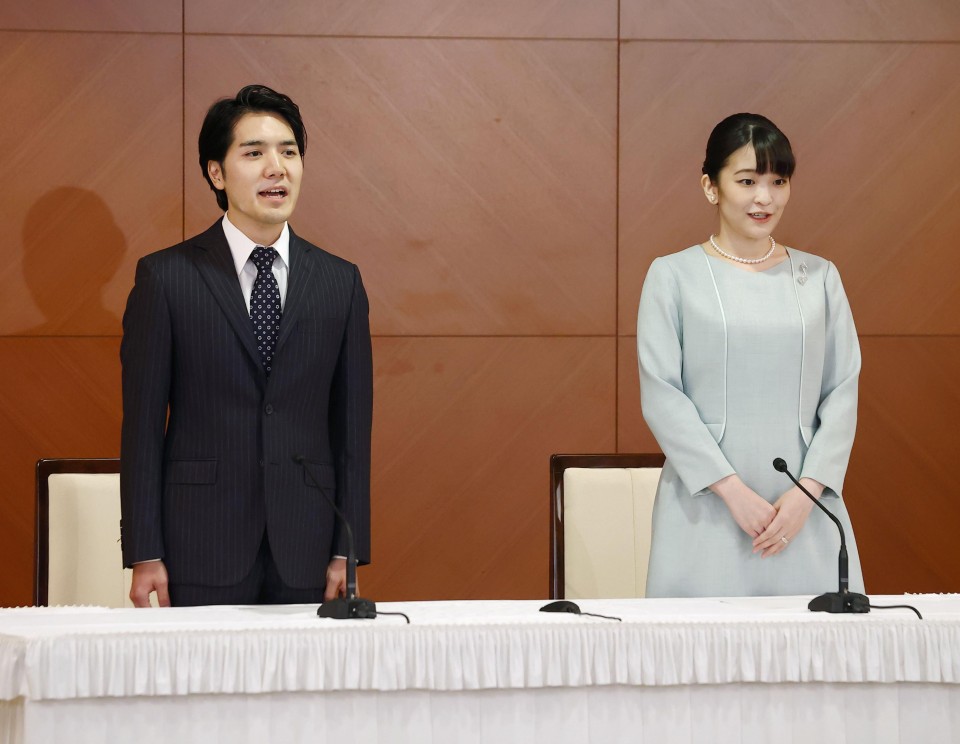 Former Japanese princess Mako, a niece of Emperor Naruhito, and her husband Kei Komuro front the press at a Tokyo hotel on Oct. 26, 2021, following their marriage earlier in the day. She became Mako Komuro under a family registry with Komuro. (Kyodo)

A massive mudslide sparked by torrential rain engulfed a residential area in Atami, a hot spa resort in Shizuoka Prefecture, southwest of Tokyo, on July 3, leaving 27 people dead or missing. Bereaved families and local business operators filed a lawsuit against the current and former owners of the land where the landslide originated, seeking a total of about 3.2 billion yen ($28 million) in damages. 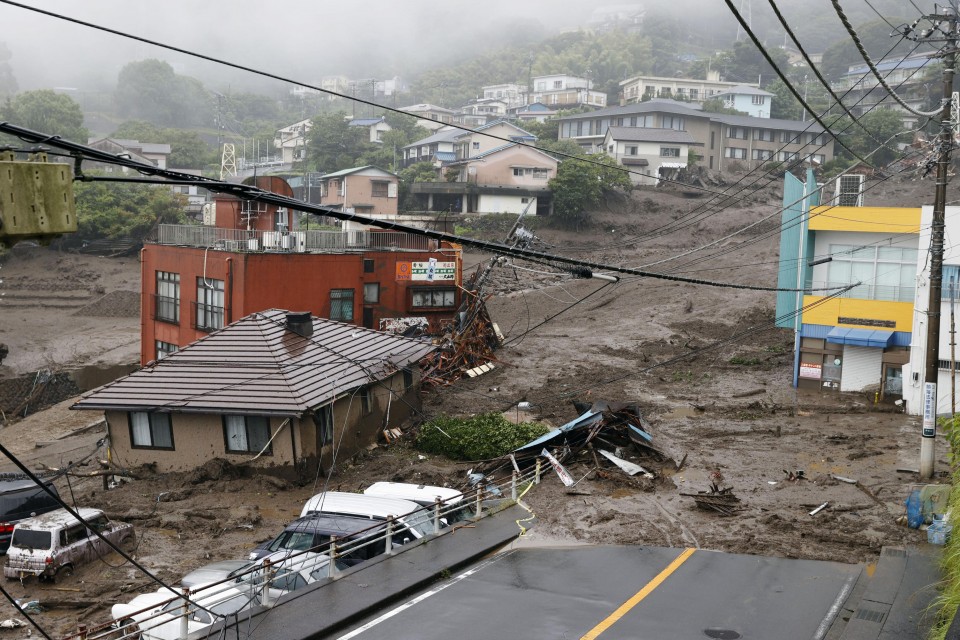 File photo taken July 3, 2021, shows the site of a large mudslide triggered by torrential rain in the Shizuoka Prefecture city of Atami, southwest of Tokyo. (Kyodo)

(9) Over 70% of population in Japan vaccinated against COVID-19

Over 70 percent of the population in Japan are currently fully vaccinated against COVID-19 after the government began the inoculation program in February. The pace of vaccination picked up during the summer to 1 million shots per day, and booster shots for health care professionals started in December. 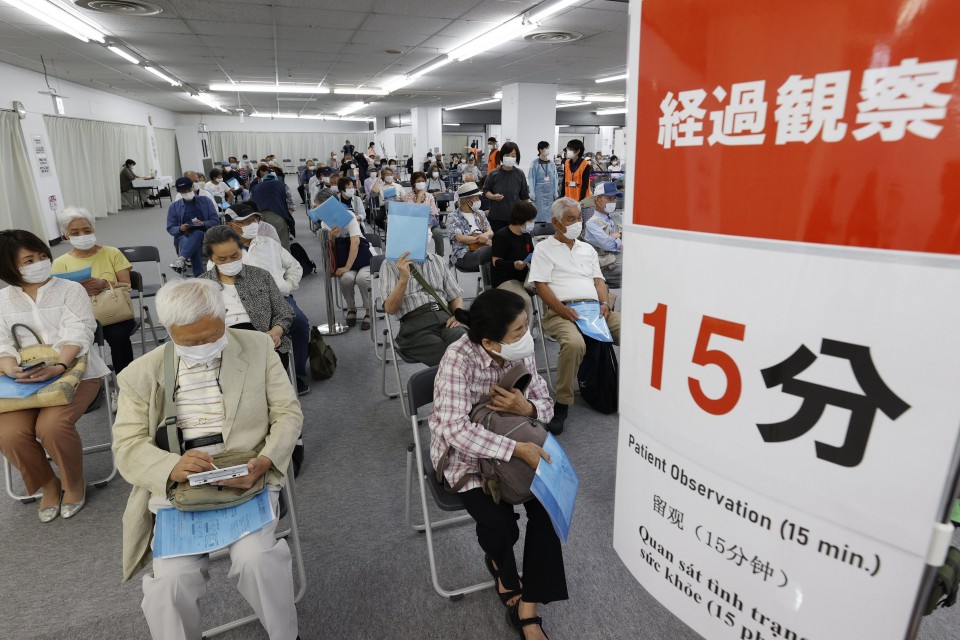 Shogi prodigy Sota Fujii won the prestigious Ryuo championship on Nov. 13 with a four-game sweep over Masayuki Toyoshima. Aged 19 years and three months, he became the youngest player in history to hold four major titles. He broke the previous record set by Yoshiharu Habu, who held four major titles in 1993 at 22 years and nine months before sweeping the seven majors that existed in 1996. 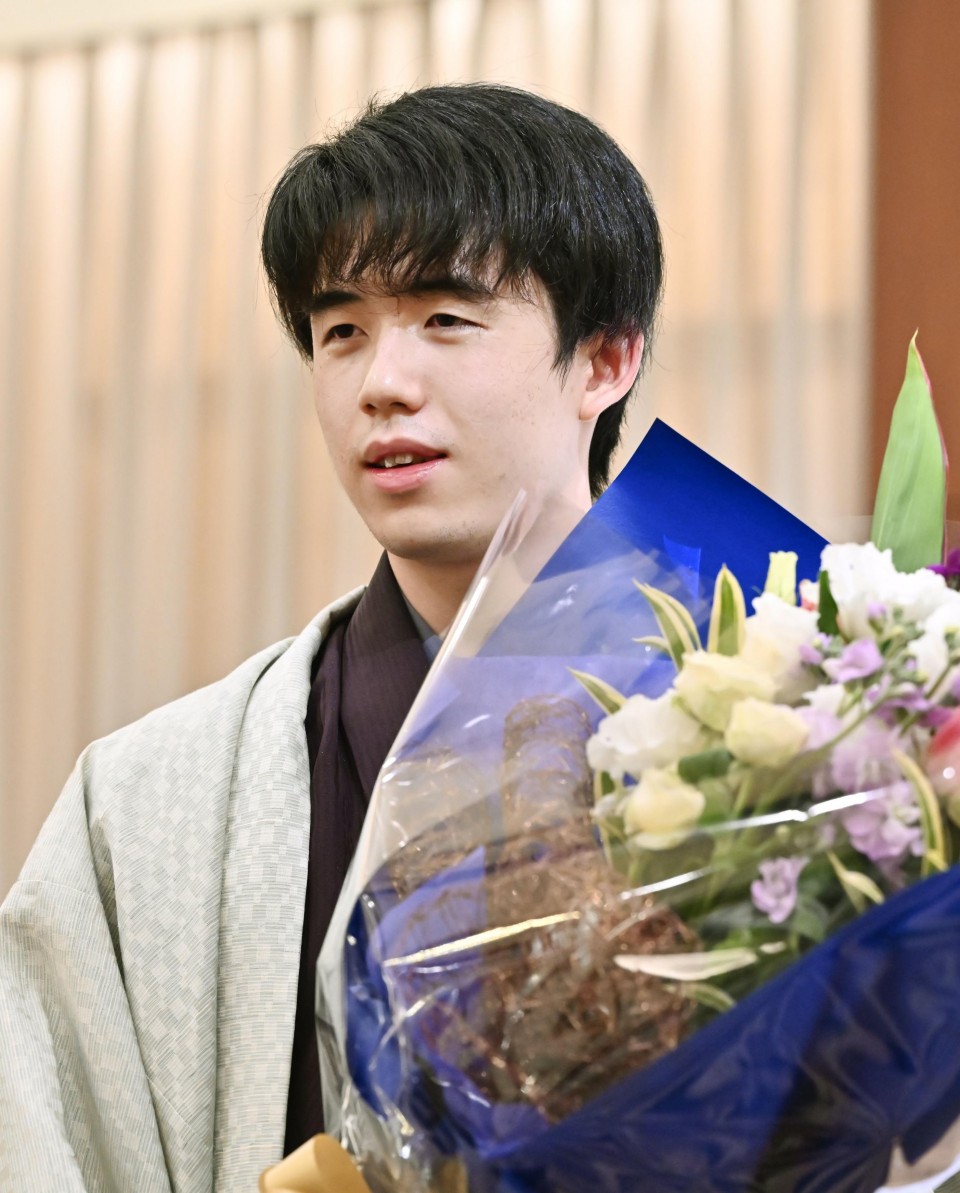 Teenage shogi player Sota Fujii poses at a hotel in the Yamaguchi Prefecture city of Ube, western Japan, on Nov. 13, 2021, after clinching Ryuo, shogi's most prestigious title, from Masayuki Toyoshima in the fourth match of the best-of-seven series. (Kyodo)