A 91-year-old South Korean woman and her support group are criticizing the Japanese government for mishandling her case and those of other female wartime laborers after having trouble confirming their Japan employment records during World War II.

Chong Sin Yong appeared at a news conference held in the southwestern city of Gwangju on Tuesday along with officials of a civic group that supports her and other women who are claiming they were forced to work for a Japanese manufacturer when young and seeking damages from the company. 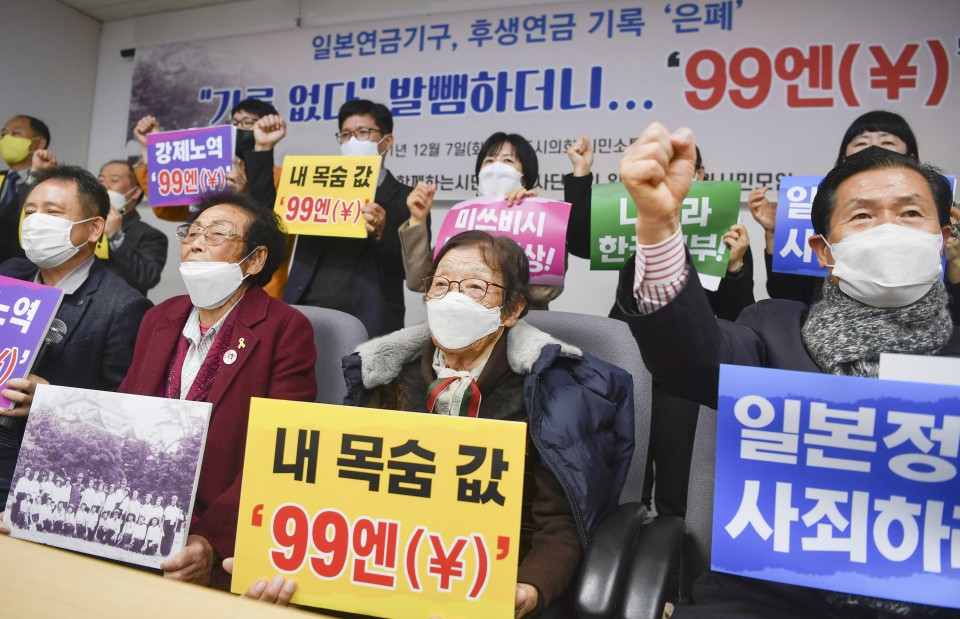 According to group officials, Chong was sent to work at a Mitsubishi Heavy Industries Ltd. munitions factory in Nagoya in central Japan during the war. In March, the group made an inquiry to the Japanese government about the record of her employee pension and those of 10 other women.

Records proving they had worked at the factory could play an important role in lawsuits the women filed against the firm in 2019 and 2020. But even though their pension identification numbers had also been conveyed, the Japan Pension Service said in June that there was no record of their employment, the group said.

About two months later, a Japanese lawmaker, acting in response to a request from a Japanese civic group supporting the South Korean group, asked the Health, Labor and Welfare Ministry for another round of investigation.

In October, the ministry replied to the lawmaker that Chong was now considered to have been in the pension program for 11 months from 1944 to 1945, the South Korean group said.

The ministry explained that though the list of people on the employee pension plan had been lost during the war, a special regulation explicitly created for such an incident was applied to her case, according to the group.

"It is just so unreasonable to say that there is no record at all and then decide to apply the regulation after the lawmaker took action," the group said.

Besides, if precedent is any guide, the total amount of money Chong could claim now after 11 months on the pension plan would only be around 99 yen ($0.87) as inflation would not be taken into consideration, the group said.

"Where is Japan's conscience in that?" the group said.