FOCUS: Japan economy to expand in 2022, but pandemic, chip crunch to weigh

The Japanese economy is expected to accelerate its expansion in fiscal 2022 following a sharp turnaround toward the end of 2021 as private consumption continues to recover thanks to subdued coronavirus infections.

Analysts predict the world's third-largest economy will see an annual real 2 to 4 percent growth in fiscal 2022 starting April, even though concerns remain about a COVID-19 resurgence and the lingering global semiconductor shortage. 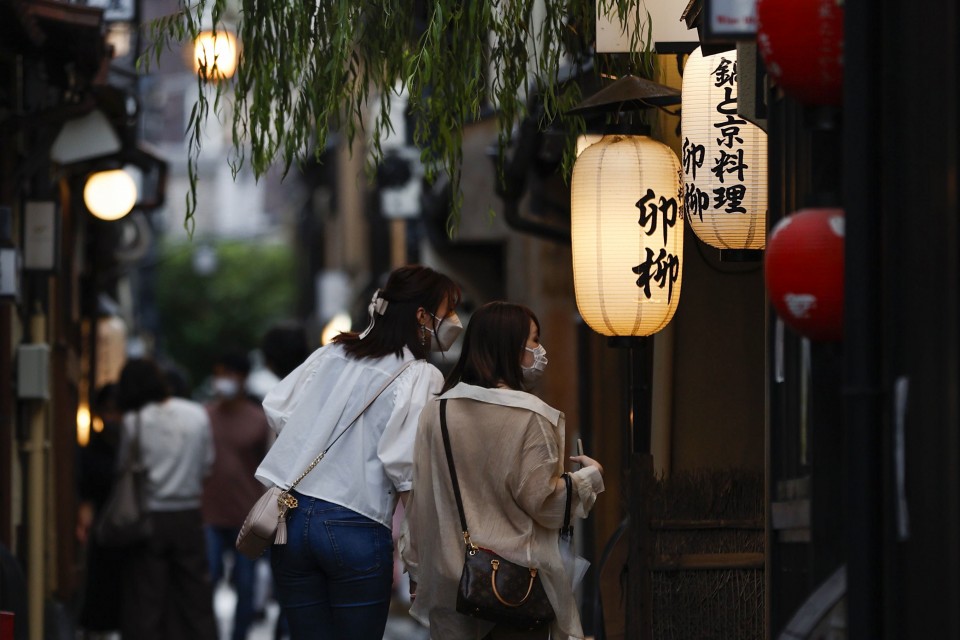 Women wearing face masks are pictured on a street lined with bars and restaurants in Kyoto's Ponto district on Aug. 19, 2021, amid the coronavirus pandemic. (Kyodo) ==Kyodo

After the economy shrank a record 4.5 percent in fiscal 2020 with the coronavirus outbreak, it began to pick up in the fall of 2021 as vaccinations progressed and economic restrictions were lifted.

The government predicts a 2.6 percent growth in fiscal 2021, followed by a 3.2 percent increase in fiscal 2022. Among other major economies, growth in calendar 2022 is forecast by the Organization for Economic Cooperation and Development to reach 3.7 percent in the United States and 5.1 percent in China.

Economists say strong growth is expected especially in the first half of 2022 in Japan, thanks to restaurants and bars and other hospitality businesses returning to normal operations and the government's stimulus initiatives, including the "Go To Travel" domestic tourism subsidy program which it envisages resuming around February.

"As long as people can move freely, considerable spending can be expected," Saito said.

Japan's household assets hit a new record in 2020 and have continued to rise since, according to Bank of Japan data.

At the end of September 2021, Japanese households held a record 1,999.8 trillion yen ($17 trillion), with cash and deposits increasing 3.7 percent from a year earlier to 1,072 trillion yen. Assets held in securities were also higher, helped by rises in stock prices.

But economists say factors that stood in the way of the economic recovery through a large part of 2021 will not entirely go away in 2022. For one, the recently spreading Omicron variant of the coronavirus could dampen private spending, which accounts for more than half of the country's GDP.

Mizuho Research & Technologies, which estimates the annual growth rate at 2.7 percent based on the premise that the next wave of infections -- the sixth since the outbreak in 2020 -- will occur in summer, forecasts an annualized 2.9 percent contraction in the July-September period.

Saisuke Sakai, senior economist at Mizuho, said, "If a sixth infection wave is caused by the Omicron variant, we expect private expenditure to drop in early 2022." 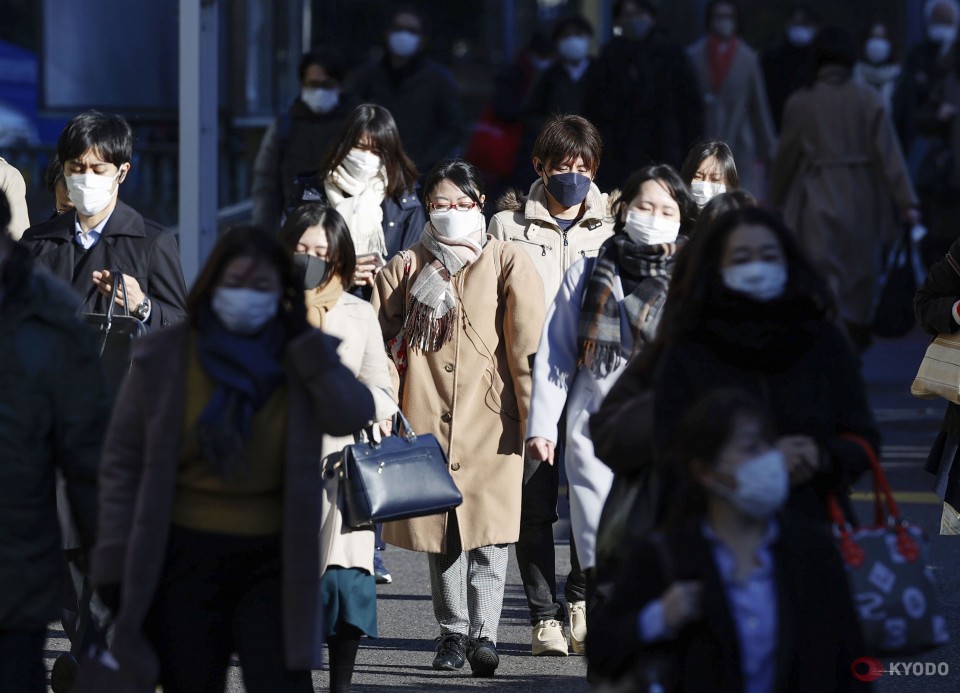 Commuters wearing face masks for protection against the coronavirus head to work in Tokyo's Kasumigaseki area on Dec. 28, 2021, the last working day of the year for government offices and most Japanese companies. (Kyodo) ==Kyodo

The highly-contagious Omicron variant has already caused a resurgence of infections in the United States and some European countries, forcing them to restrict social activities and cancel festive events. While the total number of confirmed cases involving Omicron remains low in Japan, community transmission is showing signs of increase in urban areas including Tokyo.

But the decline in spending will likely be smaller than during previous waves when states of emergency were issued to ask people to stay at home and restaurants to close earlier, Sakai said, as the government is pushing its so-called "vaccine and test package" to support economic activities.

Under the program, people certified as vaccinated or with negative tests would not be discouraged from traveling across prefectural borders and restaurants would be allowed to serve alcohol even during states of emergency if they check customers' vaccine and test statuses.

Sakai said the economy may also enjoy stronger-than-expected boosts from the benefits of oral COVID-19 drugs developed by Pfizer Inc. and Merck & Co. and an expansion of vaccine use to children.

A global chip shortage will also continue to be a concern, economists say.

A recent gradual recovery in car production is a positive development for the Japanese economy after automakers cut output since summer due to supply chain disruptions in Southeast Asia.

Many economists say the speed of the auto production recovery will remain mild, however, as global chip demand is expected to continue outstripping supply even if the COVID-19 situation in Southeast Asian countries, a key manufacturing hub for automakers, keeps improving.

"Even if automakers could boost production briefly, it will be difficult to keep doing so to get back to their normal output level," said Yasunari Tanaka, a researcher at Mitsubishi Research Institute which forecasts the chip drought will be resolved in 2023 or later.

Domestically, chipmaking capacity has surpassed its pre-pandemic level and little room is left for additional expansion, according to MRI.

"I think it has become a main scenario, rather than a potential risk, to expect a prolonged global semiconductor shortage," Tanaka said. 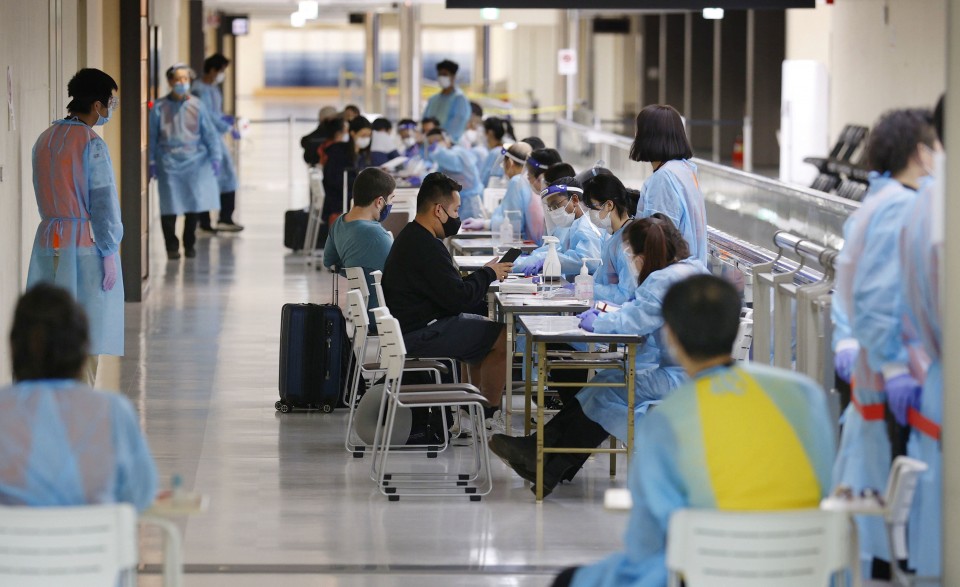 Travelers install a contact-tracing app in the quarantine area upon their arrival at Narita airport near Tokyo on Nov. 29, 2021, amid growing concern about the Omicron variant of the coronavirus. (Kyodo) ==Kyodo

The currency market is another headache for the Japanese economy, Tanaka said. Although export-oriented automakers and chip-related companies can benefit from the recent weakness of the yen against the U.S. dollar, it is a headwind for Japan given its reliance on imports of natural resources such as crude oil, he said.

Transportation and restaurant businesses, already hard-hit by the pandemic, are major consumers of crude oil and may remain under pressure, he said.

Even though the Japanese economy is set to recover to its pre-pandemic level in early 2022, it will take a full year or longer to return to its recent peak marked in the April-June quarter of 2019, which was before the consumption tax hike to 10 percent from 8 percent later that year.

"For 2022, the main goal for the Japanese economy would be achieving a 'with-corona' new normal, striking a balance between keeping the economy running and curbing infections," Mizuho's Sakai said.