Yuzuru Hanyu said Monday he hopes a successful quadruple axel will help him claim a third straight Olympic gold medal, a night after he secured his place in the Beijing Games with a win at the national championships.

The 27-year-old returned from an eight-month absence from competition due to a right ankle injury by winning his second straight and sixth overall national title, scoring 322.36 in total at Saitama Super Arena. 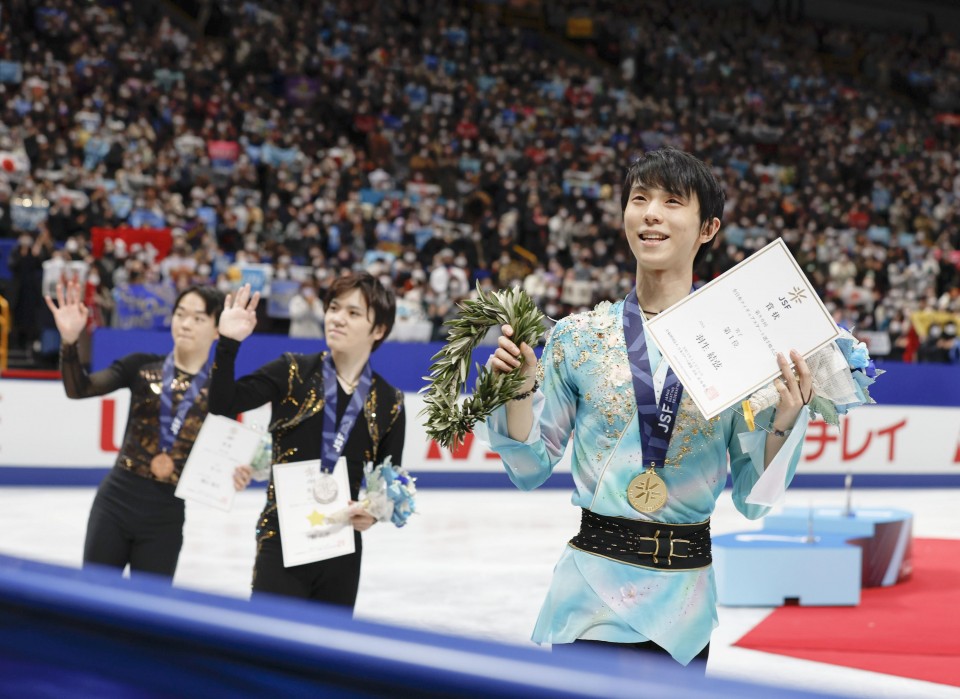 (From R) Figure skaters Yuzuru Hanyu, Shoma Uno and Yuma Kagiyama are pictured with their medals at the Japanese national championships at Saitama Super Arena on Dec. 26, 2021. (Kyodo)

Having under-rotated his quad axel during Sunday's free skate and turning it into a triple axel, Hanyu is eager to nail it at the biggest stage.

"The Olympics isn't a recital. It's a place you must win," he said during an online press conference. "For that reason, I'll be strongly determined."

"I'm hopeful I can prepare a program that sees a quad axel that earns an extra grade of execution points."

Hanyu, who is expected to battle American world champion Nathan Chen for gold in Beijing, will be joined in the Japan team by 24-year-old Pyeongchang Olympic silver medalist Shoma Uno and 18-year-old Olympic debutant Yuma Kagiyama after they came second and third, respectively, at the nationals.

"I'm hoping to show how far I've developed at the Olympic stage (in the past four years)," Uno said.

Kagiyama, whose father and coach Masakazu competed twice at the games, was thrilled at the chance of competing on the highest stage.

"I'll be trying to add one more quad jump before the games," he said. 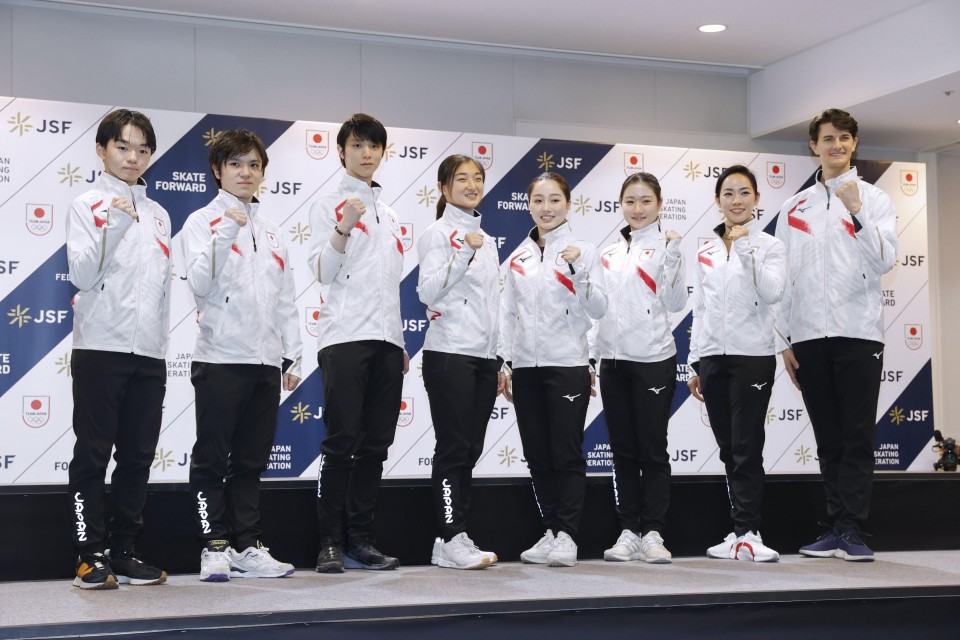 In the women's field, Kaori Sakamoto won the national title for the first time in three years to book her second straight Olympic berth.

The 21-year-old, aiming to better her six-place finish at the last Olympics, said the camaraderie she shares with Olympic debutants Wakaba Higuchi and Mana Kawabe, who rounded off the podium at the nationals, will serve them well at the games.

"I want to go above sixth, get to the podium," Sakamoto said. "There's nothing to separate the three of us and I'm not thinking about leading them, but hopefully I can make them relax."

Higuchi set a total of 230 points as her benchmark at the Olympics with her triple axel being the key.

"There won't be a single competition over the next month so I'm looking to get some training under my belt that will boost my confidence," the 20-year-old said.

Seventeen-year-old Kawabe, meanwhile, revealed she was surprised to have made the cut.

"I wasn't thinking of making the Olympics at all. There's huge excitement in being able to skate on that stage," she said. "My expression falls behind my rivals and I'll be trying to express the music much better."

The husband-and-wife pair of Misato Komatsubara and Takeru Komatsubara secured their spot in ice dancing after winning the national championship just 1.86 points ahead of Daisuke Takahashi and Kana Muramoto.

Former men's singles world champion and Vancouver Games bronze medalist Takahashi made the switch to ice dancing just a season ago, partnering with Muramoto. They had looked to have a strong chance to earn Olympic selection after posting the highest score by a Japanese duo this season.

"I felt disappointed when I heard the result, but I quickly accepted it," said the 35-year-old Takahashi, who will partner Muramoto at the world championships in March.

The pairs team of Riku Miura and Ryuichi Kihara had already qualified for Beijing before the national championships.