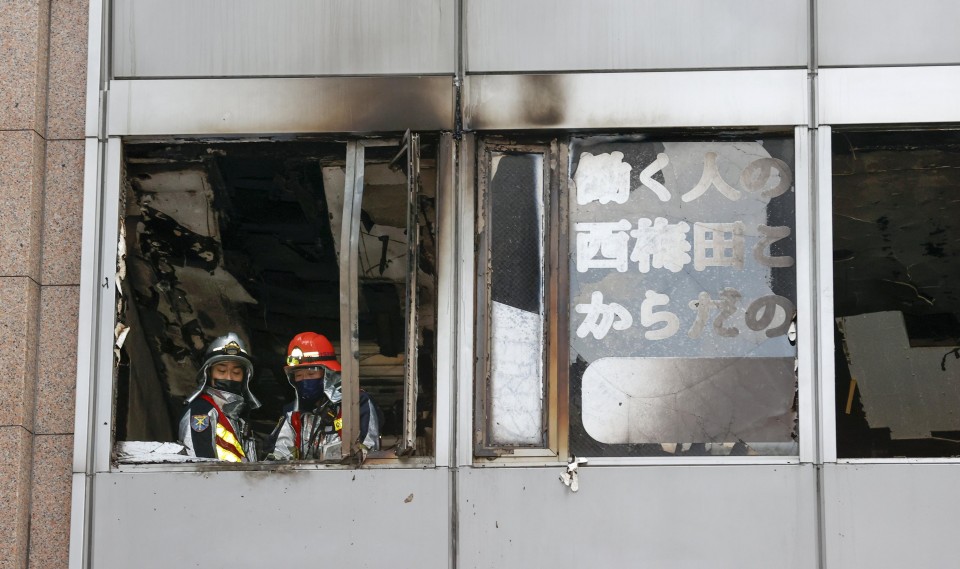 OSAKA - Twenty-four people were killed Friday after a fire raced through a mental clinic in an eight-story multiple tenant building in a bustling area of Osaka, with murder and arson suspected, police said.

The fire department in the biggest city in western Japan said a total of 28 people were injured, adding it received a report at 10:18 a.m. that a fire had started on the fourth floor of the building, which had no fire sprinklers.

The police said a man believed to be in his 50s or 60s who visited the clinic on that floor was responsible for the blaze. He was among the 28 taken to a hospital and remains unconscious, according to an investigative source.

Based on information provided by witnesses, the police said the man placed a paper bag containing a liquid near a heater in the clinic's reception area. They said he then kicked the bag, igniting the fire when the liquid flowed out. 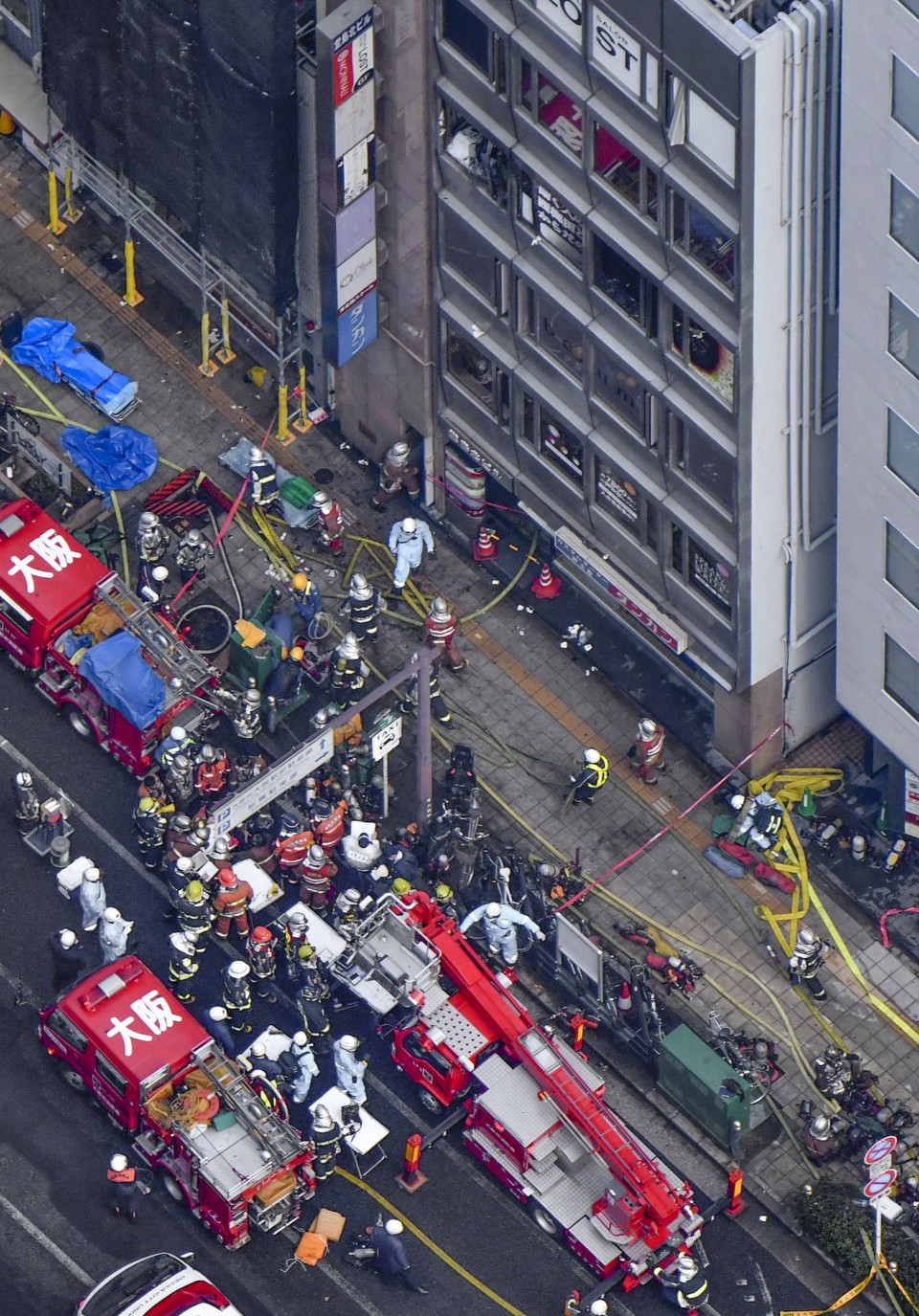 Photo taken from a Kyodo News helicopter shows firefighters gathering in front of a building in Osaka where a fire broke out on the fourth floor on Dec. 17, 2021. Twenty-seven people are feared dead. (Kyodo) ==Kyodo

The fire department said 17 men and 10 women rescued from the clinic were showing no signs of life. Of the 27, 14 men and 10 women believed to be aged in their 20s to 60s were later pronounced dead, apparently due to carbon monoxide poisoning, according to the police, who were trying to confirm their identities.

The blaze, with flames and smoke billowing out of shattered windows, was nearly extinguished by around 10:45 a.m. after burning an area of 25 square meters, about a third of the clinic's floor space. The website of the clinic located near JR Osaka Station says it provides psychosomatic and psychiatric treatments.

The entrance and exit area of the clinic was severely burned and there is a possibility that many people who were inside could not escape, according to the police.

It could be one of Japan's worst fire incidents in recent memory. In 2019, 36 people were killed after a man started a fire in an animation studio in Kyoto, also in western Japan, while a fire in 2001 at a multi-tenant building in Tokyo's Kabukicho nightlife district claimed 44 lives.

The Osaka department said it did not confirm any fire protection deficiencies in the entire building, located in the Kitashinchi district known for bars and nightclubs, when it conducted a safety inspection in March 2019.

The lack of fire sprinklers was not a violation, as they were not legally required given the number of floors and size of the building, according to the department.

Of the 28 injured, the police said, a woman in her 20s rescued from the sixth floor of the building was slightly injured.

The condition of the remaining two was not known. The police said the two were women in their 20s and 30s.

The family of the clinic's director said it could not get in touch with him.

About 30 minutes before the blaze at the clinic, there was another fire at a house in Osaka where the man used to live, and the police are investigating the possible connection with the suspected arson, investigative sources said. 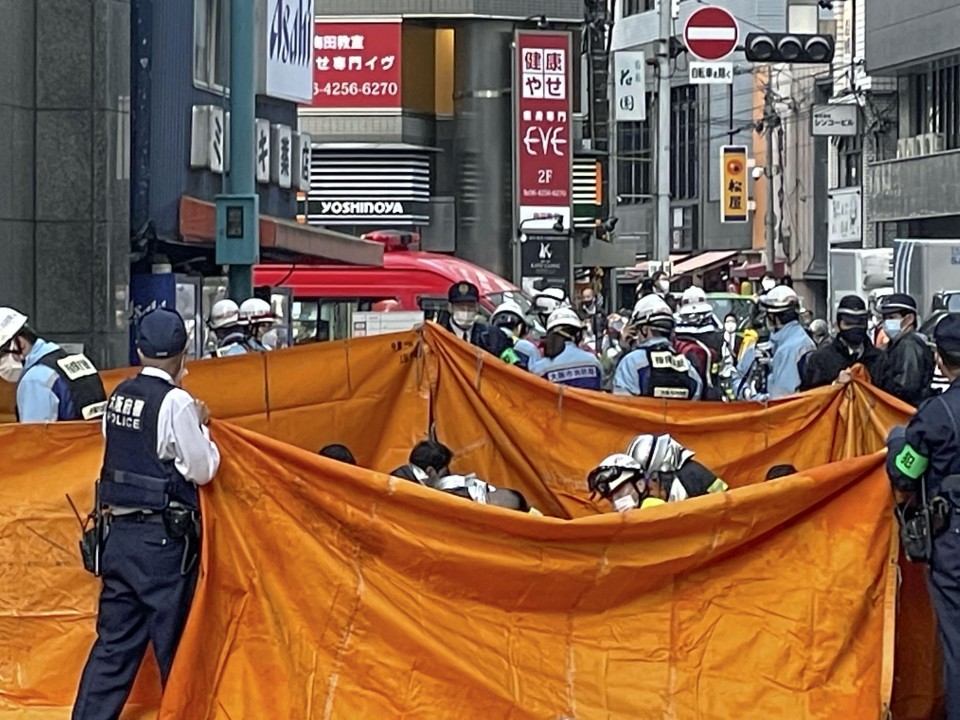 Firefighters provide first aid to those caught in a fire that broke out on the fourth floor of a building in Osaka on Dec. 17, 2021. Twenty-seven people are feared dead. (Kyodo) ==Kyodo

Meeting the press in Tokyo, Prime Minister Fumio Kishida said, "A very tragic incident occurred. First of all, we must make efforts to prevent a recurrence by grasping the actual situation and clarifying the cause and circumstances."

Shortly after the fire broke out, around 80 fire engines and ambulances arrived at the scene, with onlookers watching anxiously as the injured were carried out on stretchers.

"When I looked outside, I saw an orange flame in the window on the fourth floor of the building," a woman working in a nearby company said. "A woman was waving from the window on the sixth floor and seeking help."

Another person working at a nearby restaurant said, "I saw smoke coming out of the building and there were a lot of firetrucks and ambulances. People were being rescued by a firetruck with a ladder. At one point, there was a power outage in the surrounding area."

The clinic opened at 10 a.m., with many people believed to have come for a group treatment session for those looking to return to work after taking medical leave. A woman in her 50s said the clinic was always crowded, especially with working men, and waiting times often exceeded an hour.

"I think people who got tired from work were visiting the clinic," said a different woman who was receiving treatment. "The head of the clinic listens carefully to what people say." 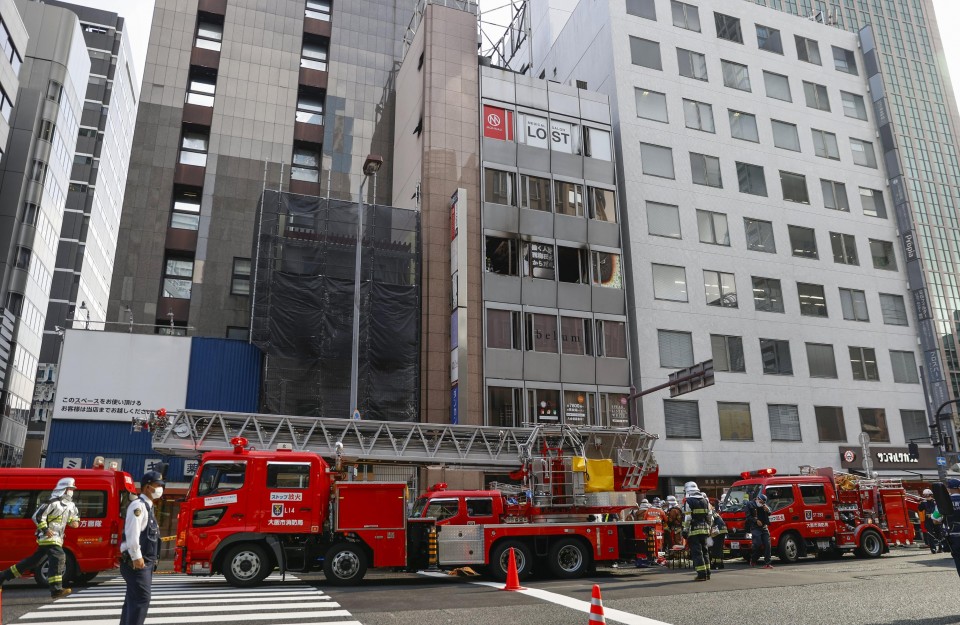 Photo taken Dec. 17, 2021, shows a building (C) in Osaka where a fire broke out on the fourth floor earlier in the day. Twenty-seven people are feared dead. (Kyodo) ==Kyodo 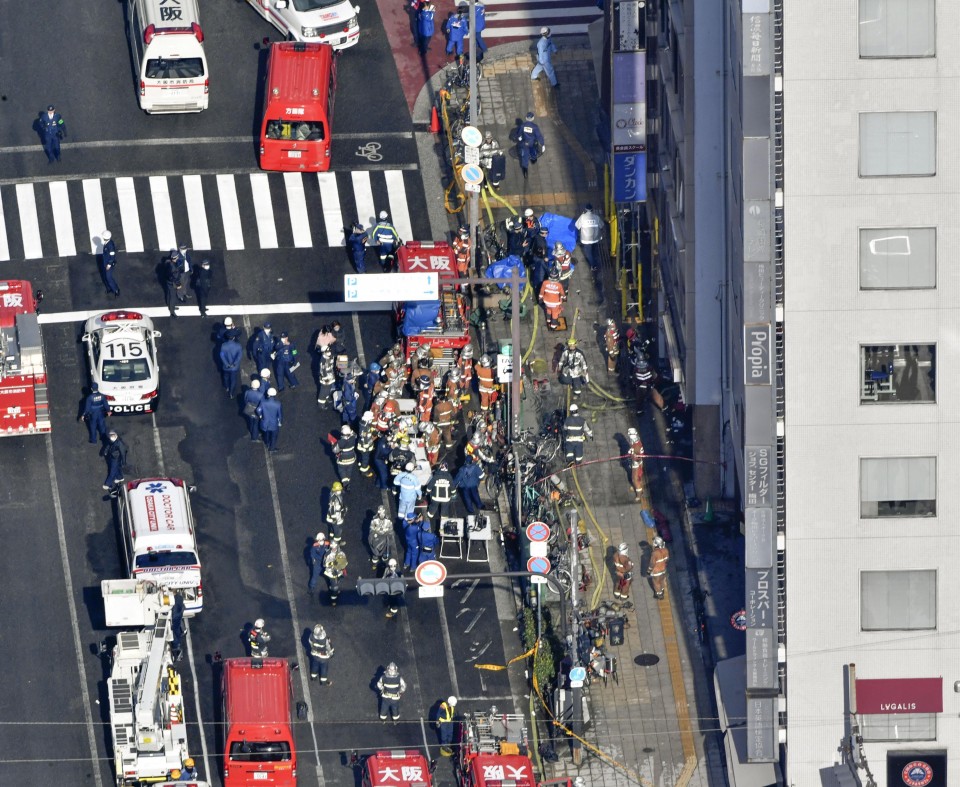 Photo taken from a Kyodo News helicopter shows firefighters and police officers gathering in front of a building in Osaka where a fire broke out on the fourth floor on Dec. 17, 2021. Twenty-seven people are feared dead. (Kyodo) ==Kyodo