The Japanese government has decided to allocate less than 300 billion yen ($2.7 billion) for Okinawa's economic development for the first time in 10 years in fiscal 2022, an official familiar with the matter said Saturday, as confrontation over a U.S. military base intensifies between them.

The government's stated reason is that reducing spending on public works in Okinawa is possible as infrastructure development has already progressed in the southern island prefecture, which next year marks the 50th anniversary of its reversion to Japan from U.S. control. 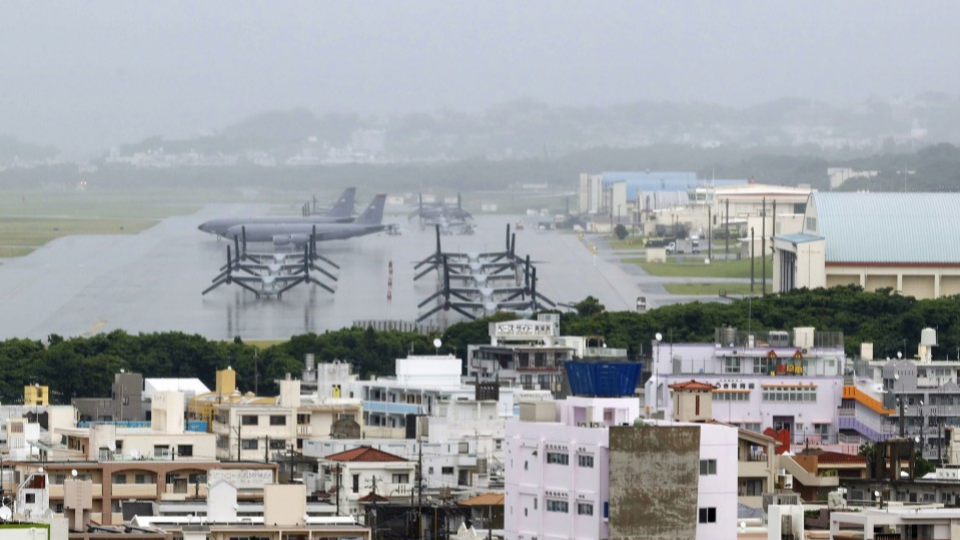 Photo shows U.S. Marine Corps Air Station Futenma in Ginowan in Japan's southern island prefecture of Okinawa on June 22, 2020, a day before the 60th anniversary of the enforcement of the revised Japan-U.S. security treaty. (Kyodo) ==Kyodo

But government officials have suggested that the real reason behind the cut in the budget for Okinawa in the year starting next April is related to the prefectural government's stiff opposition to a plan to relocate the U.S. Marine Corps Air Station Futenma within the subtropical island.

"Of course, Okinawa development measures and the issue of the base are linked," one of the officials said, although Okinawa Gov. Denny Tamaki directly asked Prime Minister Fumio Kishida in November to maintain the budget above 300 billion yen.

The official added that the government's response to the request needs to take into account next autumn's Okinawa gubernatorial election, signaling that the reduction is aimed at rattling the prefectural government led by Tamaki.

Tamaki became governor in 2018 on a platform of opposing the Tokyo-Washington plan of moving the air base from a residential area of Ginowan to the less densely populated coastal area of Henoko in Nago.

After decades of hosting the bulk of U.S. military bases in Japan, many in Okinawa are frustrated with noise, crimes and accidents linked to the facilities.

There have been renewed tensions between the government and Okinawa since Tamaki's rejection late last month of the Defense Ministry's application to change ways to relocate the base.

A member of the Liberal Democratic Party, headed by Kishida, has said "there is no way to accept the prefecture's request" given the rejection.

As for the financial support, former Prime Minister Shinzo Abe pledged in 2013 to keep the level of 300 billion yen until fiscal 2021. Following the promise, then Okinawa Gov. Hirokazu Nakaima signed off on landfill work that will allow the key U.S base to be transferred to the new area.

Tamaki's predecessor, Takeshi Onaga, whose death led to the 2018 gubernatorial election, was also a staunch opponent of the relocation plan.

After Onaga took office in 2014, the size of the budget became smaller every year, except for fiscal 2016 that saw a slight increase, and it was kept at 301 billion yen since fiscal 2018.

In August, when Kishida's predecessor Yoshihide Suga was prime minister, the Cabinet Office made a budgetary request of 299.8 billion yen for measures to promote the development of Okinawa in the next fiscal year.

Despite strong local opposition to hosting the air base, the Japanese government has said the long-stalled relocation plan is the "only solution" for removing the dangers posed by the Futenma facility.

The plan dates back to a 1996 Japan-U.S. accord on the return of the land occupied by the base.