Under safety measures compiled by the ministry, it will also call on railway firms to obtain passengers' understanding and cooperation over baggage inspections after a revised ordinance enabled operators to begin conducting security checks from July this year. 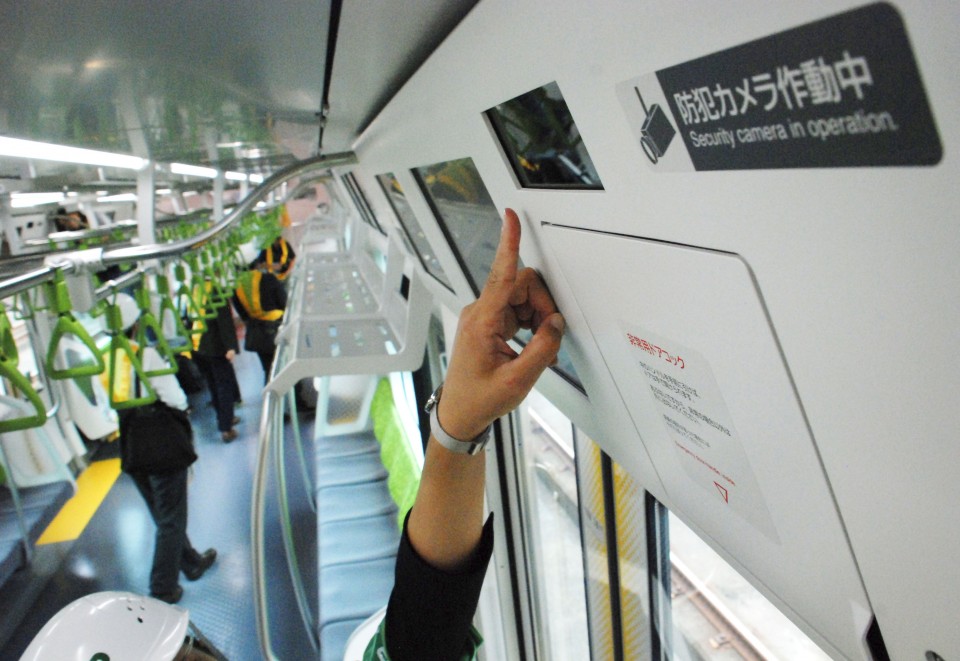 File photo taken in May 2018 shows a surveillance camera on a JR Yamanote Line train in Tokyo. (Kyodo)

The move comes after the Ministry of Land, Infrastructure, Transport and Tourism exchanged views on security measures with major railway operators including the Japan Railways group.

"Learning a lesson from the incident, we will study the performance of security cameras and shouldering the costs of their installation," Saito added. The ministry said it will start discussions on these issues with experts and train operators possibly later this month.

The transport ministry will study revising an ordinance on disaster prevention measures that instructs operators to take safety steps against fire but currently contains no requirements on security cameras.

Meanwhile, the government will consider making an exception in the case of one-car trains where the crew can easily grasp the situation, ministry officials said.

Under the measures, railway operators are asked to inform passengers about the location of emergency buttons and request that they use them without hesitation in an urgent situation.

As for emergency levers that would enable users to open doors manually, railway firms will consider providing explanations on how to handle them and making their functions easier to understand, given that they could disrupt train operations when manipulated, the officials said.

Train operators are also asked to conduct necessary drills with police to prepare for a possible encounter with an assailant, the government said.

During the Oct. 31 attack on a Keio Line limited express train in Tokyo, passengers pushed emergency buttons at several locations inside the train but crew were unable to communicate with them to learn of the situation. Since there were also no security cameras, they were unable to properly grasp what was taking place.

In addition, when a passenger operated an emergency lever to make the train come to an emergency stop at the next station, it ended up halting at a point slightly behind the proper stopping position, leaving some doors closed and prompting many passengers to escape by climbing out of train windows onto the platform.

In the Oct. 31 attack on the limited express, a 72-year-old man was seriously hurt after allegedly being stabbed by 25-year-old Kyota Hattori. The suspect also allegedly ignited a fire inside the train.

The incident followed another knife attack in August this year when a man injured 10 passengers on an Odakyu Electric Railway commuter train in the capital.