Over 100 feared dead as dozens of tornadoes hit U.S. states

Over 100 people are feared dead as dozens of tornadoes ripped through six states in the U.S. Midwest and Southern regions from Friday night into Saturday, local media said.

Damage from tornadoes was reported in Arkansas, Illinois, Kentucky, Mississippi, Missouri and Tennessee, with Kentucky appearing to be hit hardest.

Speaking at a press conference Saturday morning, Kentucky Gov. Andy Beshear said at least 70 people had been killed by tornadoes in his state and the death toll could rise to more than 100 as search and rescue operations continue. 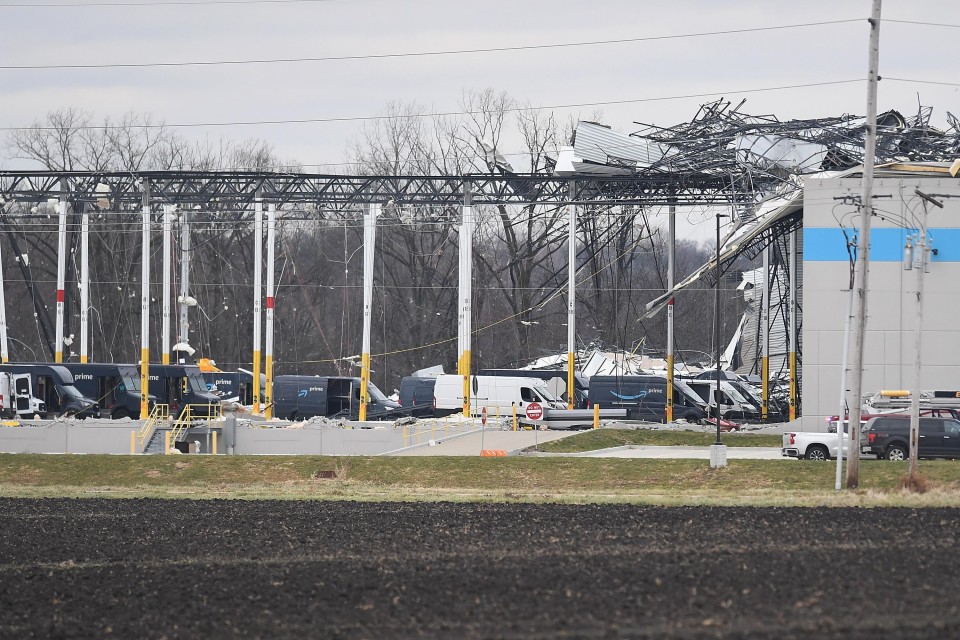 Destruction is seen outside a damaged Amazon Distribution Center on December 11, 2021 in Edwardsville, Illinouis. (Getty/Kyodo)

According to Beshear, about 110 people were inside a candle factory in Mayfield that collapsed after a tornado touched down in the area. "We believe we'll lose at least dozens of those individuals," the governor was quoted as saying by CNN.

Later around 40 people were rescued from the collapsed building.

Having declared a state of emergency, the governor has sought support from the federal government while mobilizing National Guard troops for search and rescue operations and the clearing of debris.

U.S. media video footage shows many collapsed buildings and houses left in the aftermath of the tornadoes in Kentucky and other affected states.

President Joe Biden, who was briefed on the disaster, tweeted, "We're working with Governors to ensure they have what they need as the search for survivors and damage assessments continue."

Beyond Kentucky, multiple deaths were confirmed in Illinois after a tornado inflicted severe damage on an Amazon warehouse, with many people trapped in the wreckage.

Three people have died in Tennessee, while tornadoes claimed one life each in Arkansas and Missouri.