Manabe was one of a number of Nobel laureates who, like last year, are receiving their medals in their country of residence instead of in Stockholm due to pandemic-related travel restrictions. 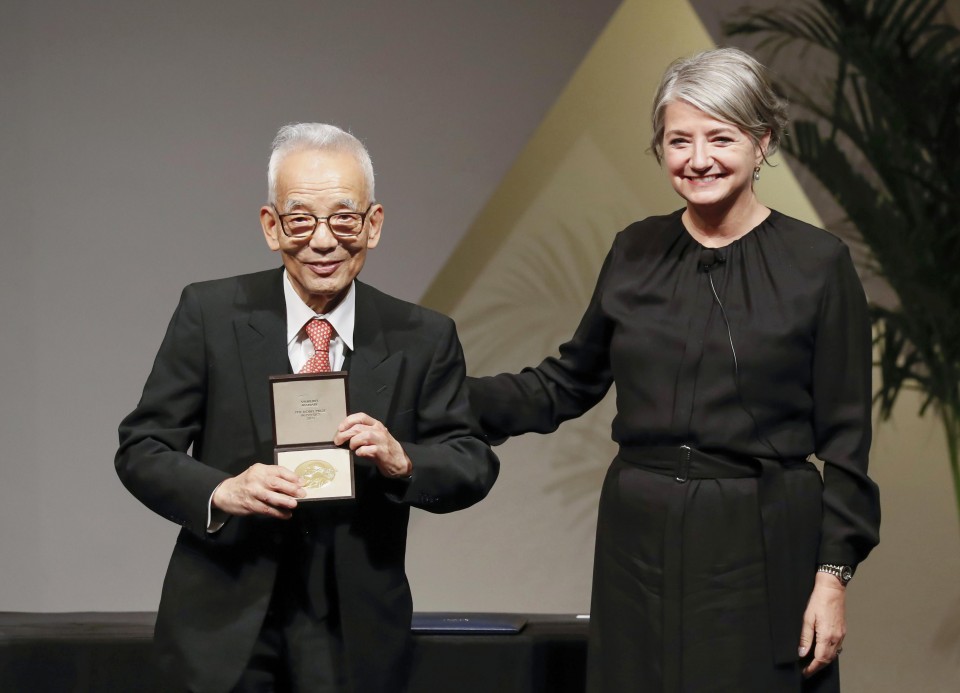 Syukuro Manabe (L) receives a Nobel Prize medal in physics on Dec. 6, 2021, at the National Academy of Sciences in Washington. (Kyodo)

"The medal was heavier than I thought," the 90-year-old senior meteorologist at Princeton University told reporters following the ceremony for U.S.-based laureates at the National Academy of Sciences in the U.S. capital. "I'm very happy."

Manabe and Klaus Hasselmann, 90, of Germany, shared half this year's Nobel physics prize, while the remaining half went to Italian Giorgio Parisi, 73.

The laureates were recognized for their "groundbreaking contributions" to the understanding of complex physical systems, such as the Earth's climate, according to the Royal Swedish Academy of Sciences, the prize awarder. The main ceremony in Stockholm is due to take place on Dec. 10.

Manabe, who earned a doctorate of philosophy from the University of Tokyo, laid the groundwork for the development of current climate models, demonstrating through computer simulations how increased levels of carbon dioxide in the atmosphere lead to increased surface temperatures.

Born in Ehime Prefecture, western Japan, Manabe moved to the United States in 1958 to take a job at the U.S. Weather Bureau, now called the National Oceanic and Atmospheric Administration.

He became a naturalized U.S. citizen in 1975 and currently resides in the eastern state of New Jersey.

The prize of 10 million kronor ($1.1 million) will be split between the winners, with the one half going to Manabe and Hasselmann and the other half to Parisi.