A pair of capybaras at an amusement park in Marugame, Kagawa Prefecture, enjoyed a hot "yuzu" citrus bath on winter solstice on Dec. 22, thanks to park staff who prepared the hot tub in line with a Japanese tradition to ward off illnesses in winter. 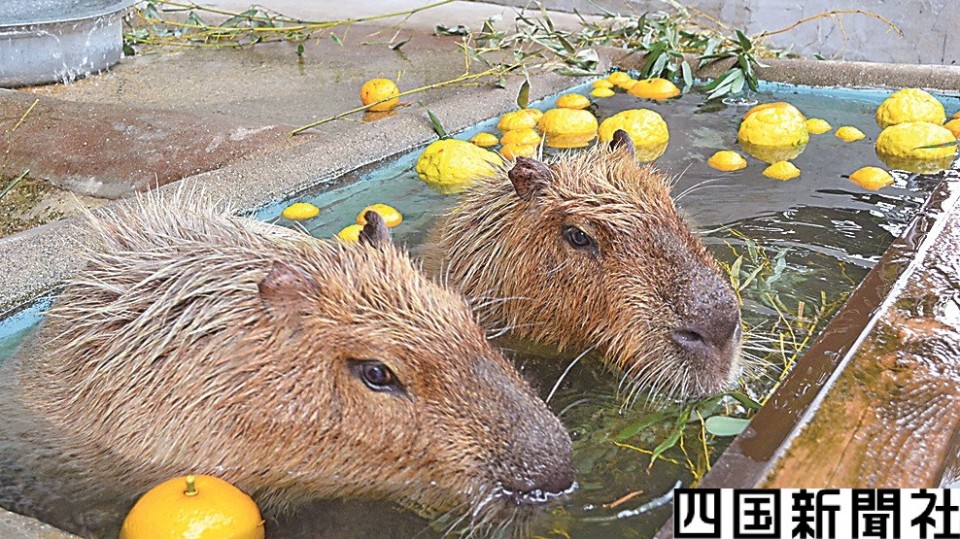 A pair of capybaras soak in a hot bath with "yuzu" citrus fruits at New Reoma World in Marugame, Kagawa Prefecture.

About 40 yuzu fruits and "mikan" tangerines grown in New Reoma World park were floated in the hot tub and the two capybaras, which have been kept there at since 2016, took a good long soak, squinting their eyes and relaxing as a refreshing aroma filled the air.

Marking its 30th anniversary this year, the park has many events planned for the year-end and New Year holidays.

The staffer who has been in charge of preparing the capybaras' yuzu baths every year said, "When I put in the yuzu fruits, it really makes me feel that the end of the year has come."

"It may appear to be a nonchalant scene, but for us, this is the cue to ramp up our efforts in preparation for the holiday season," she said. "I want to do my best to make sure not to catch a cold."

According to the park, capybaras belong to the rodent family and are native to South America. When the temperature drops, they like to soak in a hot bath or be showered with hot water to keep out the chill.