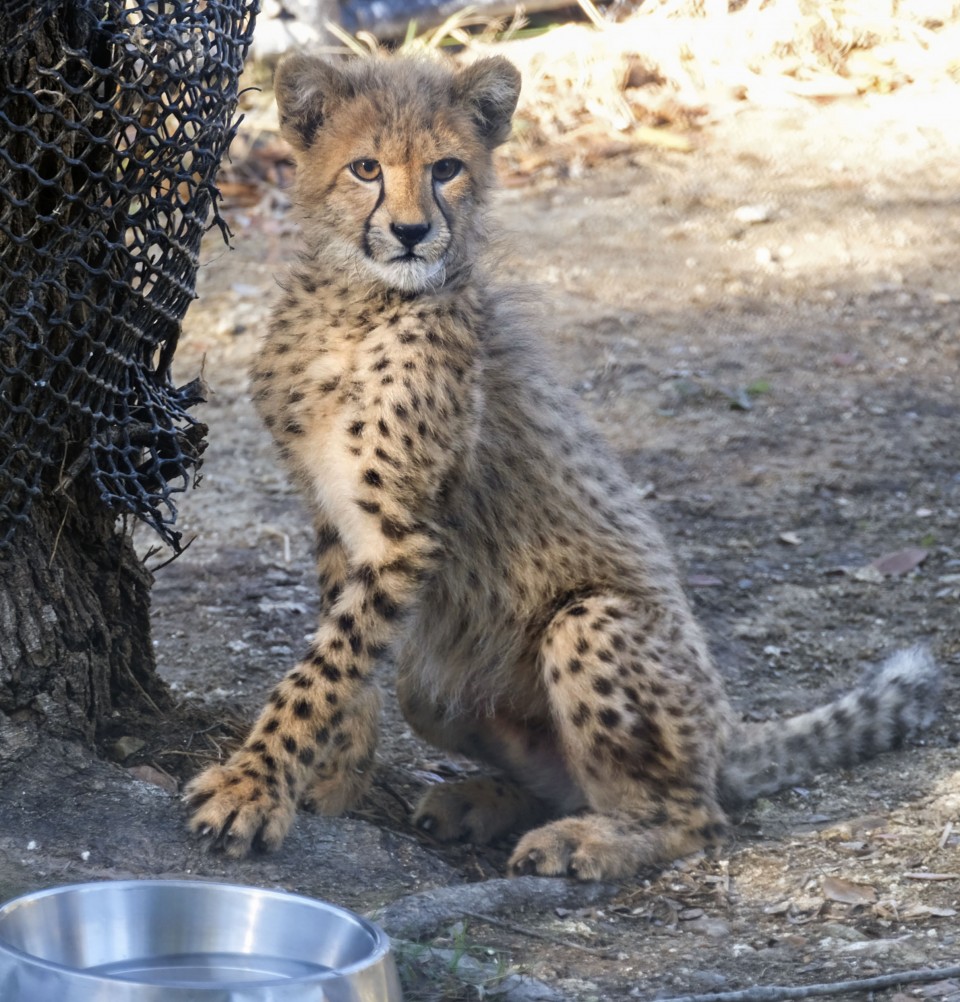 A baby cheetah is pictured at the Adventure World zoo, aquarium and amusement park in the Wakayama Prefecture town of Shirahama, western Japan, on Dec. 3, 2021. (Kyodo) ==Kyodo

TOKYO - The Japanese government has decided to allocate less than 300 billion yen ($2.7 billion) for Okinawa's economic development for the first time in 10 years in fiscal 2022, an official familiar with the matter said Saturday, as confrontation over a U.S. military base intensifies between them.

The government's stated reason is that reducing spending on public works in Okinawa is possible as infrastructure development has already progressed in the southern island prefecture, which next year marks the 50th anniversary of its reversion to Japan from U.S. control.

TOKYO - India, Greece and Romania, as well as four U.S. states, will be added Sunday to Japan's list of places from which returning Japanese nationals and foreign residents will be subject to stricter quarantine requirements as part of efforts to prevent the spread of the Omicron variant of the coronavirus.

Travelers from the three countries, Colorado, Hawaii, Minnesota and New York will be required to spend three days of their two-week quarantine period in government-designated facilities.

TOKYO - Japan is entering its end-of-year party season with most COVID-19 restrictions lifted based on low numbers of cases, but concerns about the emergence of the Omicron coronavirus variant are likely to keep the festive mood restrained once again.

Rising material costs, sparked by high crude oil prices, and a change in people's attitudes toward after-work drinking and dining with colleagues has put an additional burden on restaurant and bar operators in Japan, which otherwise would be welcoming their busiest time of the year.

WASHINGTON - The United States and the European Union are increasingly on the same page in countering China's growing assertiveness in the Indo-Pacific region, U.S. Deputy Secretary of State Wendy Sherman indicated Friday following talks with the secretary general of the EU's diplomatic service.

"We see our approach and the EU's approach to the PRC as complementary and increasingly convergent and aligned," Sherman said at an online event hosted by a Washington think tank, referring to the acronym for China's official name, the People's Republic of China.

WASHINGTON - The Treasury Department said Friday that Japan and China remain on a list of countries it monitors over potentially "unfair" currency practices, but refrained from labeling any major U.S. trading partner as a manipulator.

In a semiannual report to Congress on currency manipulation, the department also called China an "outlier" among major economies, citing its failure to publish foreign exchange intervention data and a broader lack of transparency around key features of its exchange-rate mechanism.

AUSTIN, Texas - A photographic exhibition depicting the devastation caused by the U.S. atomic bombings of Hiroshima and Nagasaki is currently being held at a Texas university, a quarter of a century after a prominent museum canceled its initial plans to exhibit artifacts amid strong opposition from veteran groups.

The exhibition, titled "Flash of Light, Wall of Fire," was organized by the University of Texas at Austin in cooperation with the Anti-Nuclear Photographers' Movement of Japan, a group of Japanese photographers working to convey the horrors of nuclear weapons to future generations.

DOHA - Nasser Al-Khater, the chief executive of the 2022 World Cup in Qatar, said he anticipates his nation's COVID-19 preparedness and lessons learned from this summer's Tokyo Olympics will allow soccer's premier event to take place with packed stadiums.

Al-Khater is hopeful next year's compact tournament, with all eight of the stadiums within 75 kilometers of each other, will be able to fully welcome fans, avoiding a repeat of the nearly spectatorless Tokyo Olympics.

TOKOROZAWA, Japan - Recently retired pitcher Daisuke Matsuzaka bid farewell in a speech Saturday at the Seibu Lions' fan appreciation day, with Ichiro Suzuki making a surprise appearance to present his former opponent and Japan teammate with a bouquet of flowers.

A household name in Japan since high school, thanks to his iconic performances on the national stage, Matsuzaka faced just one batter this season in the final game of a pro career that started in 1999.