The first case of community transmission of the Omicron variant of the coronavirus has been reported in Tokyo, the metropolitan government said Friday, making the capital the latest area to confirm the spread of the highly contagious strain.

A male doctor in his 50s, who works at a clinic in the capital and has no history of recent travel overseas, was confirmed to be infected with the variant through an unknown route, it said.

The case in Tokyo follows those reported in the western prefectures of Osaka and Kyoto, where new cases of the variant were also confirmed amid increasing concerns over a possible resurgence of infections. 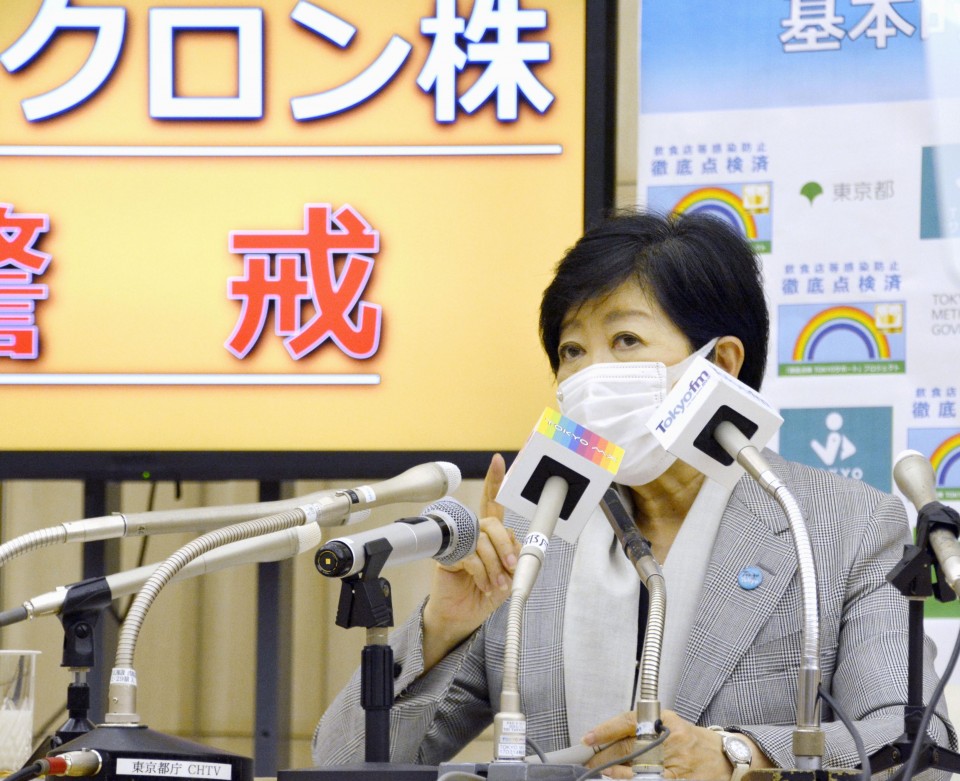 Tokyo Gov. Yuriko Koike speaks at the metropolitan government headquarters on Dec. 24, 2021, after the first case of community transmission of the Omicron variant of the coronavirus was confirmed in the Japanese capital. (Kyodo) ==Kyodo

The metropolitan government has classified five people as close contacts of the doctor, hospitalized since Friday last week. The five -- two family members and three workers at his clinic -- have all tested negative for the virus, it said.

The Tokyo government on Friday also confirmed three other cases of the variant, apart from the doctor. All three people had a history of overseas travel.

Tokyo Gov. Yuriko Koike told a press conference that Tokyo will conduct free COVID-19 tests from Saturday. It plans to conduct 30,000 tests per day for those wishing to be tested at 180 locations in the capital next week.

"It is important to strengthen the testing system to enable (infected individuals) to be examined and put under quarantine early," Koike said.

According to Koike, the doctor had worn a face mask and face guard at work, and his patients had not come into close contact with him. The metropolitan government is still calling for some 100 workers at the clinic and his patients to be tested for infections.

The doctor has received two vaccination doses and is currently showing no symptoms. He experienced a fever after work on Thursday last week and was hospitalized the following day after he tested positive for the virus, the metropolitan government said.

In Kyoto, the prefectural government said Friday that three people had been infected with the variant through unknown routes, bringing the total number of cases of community transmission in the western prefecture to four.

Meanwhile, Osaka Prefecture said it has confirmed two new cases of the variant. Cases of community transmission of the variant were first reported in the prefecture on Wednesday.

Japan to expand 3-day quarantine to nearly all travelers from U.S.