Alarmed by the gradual disappearance of small-scale miso breweries that have been a key part of Japan's tradition of fermented foods, an entrepreneur is on a mission to save such enterprises with her "miso drops" invention -- balls of the soybean paste made the old-fashioned way that can be easily made into individual soup servings for busy but health-conscious consumers.

The products are the brainchild of Motomi Takahashi, who was won over to the dietary benefits of miso made using traditional techniques when she was recovering from an illness that led her to undergo surgery in 2016. 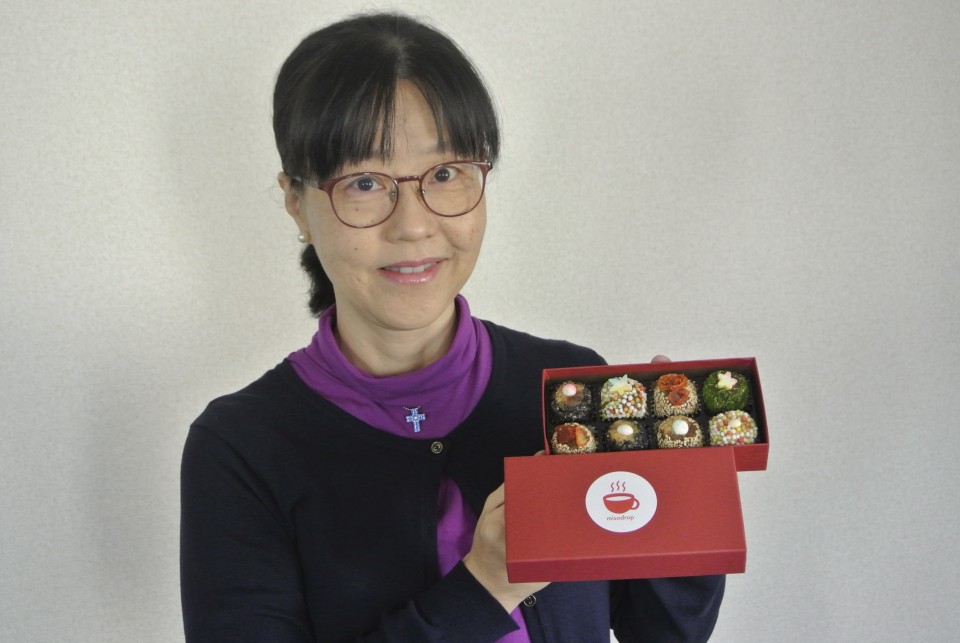 Motomi Takahashi, developer of "miso drops" balls for individual soup servings using soybean paste produced in traditional miso breweries in Japan, shows a box of the products on Nov. 3, 2021, near her office in Tokyo. (Kyodo)

The miso drops, produced by hand and sold in elegantly presented sets of various quantities, are flavored with soup stock derived from vegetables. Users can make soup by just adding hot water, stirring, and waiting for 30 seconds.

Even though easy-to-make miso soup products abound in Japan, they use soybean paste mass-produced at factories. According to Takahashi, their flavors lack the richness of miso matured over the long haul in traditional wooden barrels at small breweries, which are often family-run enterprises handed down across the generations.

"When I was recovering from the illness, I happened to get miso from a brewery in Tokushima Prefecture as a gift and drank soup made from it every day. I was shocked to learn the difference in taste from that of instant products and got well very quickly," she said.

Takahashi said she was under heavy stress due to hard work as a public relations officer months before she developed her illness, with weakened digestive and immune systems.

Fermented foods are produced or preserved through the activity of microorganisms, with the processes usually involving yeast or bacteria, and are considered to be beneficial to health by improving gut flora. In miso production, the "koji" mold, which is also utilized by soy sauce, sake and shochu makers, is used to ferment soybeans.

After becoming convinced of the role miso played in her recovery from illness, Takahashi studied koji at a nutrition school and struck upon the idea of starting a business to promote the foodstuff and Japan's dietary culture of fermentation.

She also learned that small-scale miso breweries preserving traditional manufacturing methods are in danger of extinction. The number in Nagano Prefecture, which makes up the largest amount of miso among the country's 47 prefectures, plunged 41.6 percent to 143 between 1963 and 2010.

Many have shut down due to financial struggles and difficulty in finding successors.

With the ambition of taking her miso drops overseas, Takahashi introduced prototypes at workshops held in Taiwan and Hong Kong in 2018 and 2019, targeting local entrepreneurs interested in health foods. 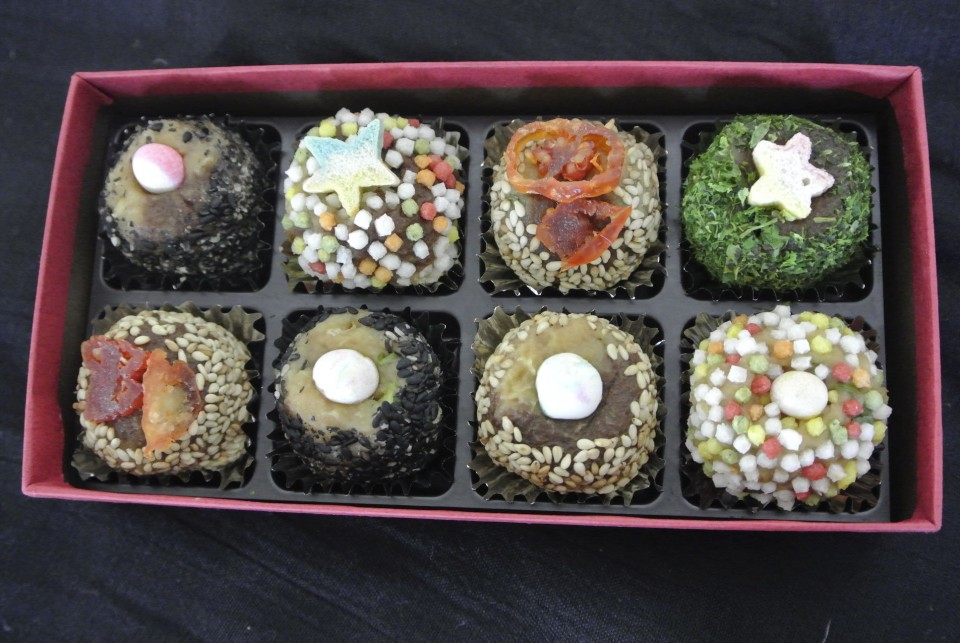 Photo taken on Nov. 3, 2021, shows a box of "miso drops" products decorated with such ingredients as sesame, rice crackers and dried tomato. (Kyodo)

"The original products used soup stock derived from fish and quite a few people said they cannot consume soup made from them because they are vegetarians. That's why I have shifted to plant-based soup stock," Takahashi said.

In Japan, ingredients such as dried sardine, bonito flakes and kelp are commonly used as stock for miso soup.

Although the coronavirus pandemic prevented Takahashi from getting feedback from potential overseas customers in person, she finalized the concept of her product and opened for business after raising capital via crowdfunding in late 2020.

Among the products she is developing is "misodrop47," under which Takahashi aims to deliver to customers miso from traditional breweries in each of Japan's 47 prefectures.

"I wanted to develop products for the misodrop47 project to allow customers to casually sample miso from all over Japan," she said, referring to how difficult it is for people to use up miso from traditional breweries that ship products weighing at least 500 grams designed for a large family.

"With each miso drop weighing around 25 grams, customers can enjoy the uniqueness of a variety of local miso products," she added.

The first product of the misodrop47 project features miso from eight prefectures. Takahashi tries to incorporate other aspects of regional food cultures in the products, too, with a miso drop from Kagoshima Prefecture, southwestern Japan, for instance using dried powder from the Sakurajima radish, a locally grown vegetable.

"By adding crackers, pretzel and dried corn, soup made from miso drops can be more filling, serving as a late-night meal or breakfast," Takahashi said. She added the miso drop products are intended for health-conscious consumers who are too busy to cook miso soup by themselves every day and are also marketed as gifts.

Miso production and consumption in Japan have declined over the years in Japan, with per-capita supply almost halving to 3.8 kilograms a year in a roughly four-decade period through 2007, according to the Japan Federation of Miso Manufacturers Cooperatives.

The decline reflects the Westernization of dietary habits, families getting smaller and members eating meals separately in Japan, it said.

In contrast, miso exports have been on the rise, with both the volume and value jumping about 15-fold between 1977 and 2020 to about 16,000 tons and 3.8 billion yen ($34 million) on the growing popularity of Japanese food overseas and the use of miso as a seasoning, the federation said.

Takahashi said she has received positive responses to the miso drops products from such countries as Germany and South Africa on an Instagram site introducing them and plans to market them overseas once the global health crisis subsides.

Encouraged by the steady growth of Japan's miso exports, Takahashi said, "My ideal concept is miso going beyond the Japanese market and making the world its stage."