Police on Sunday identified Morio Tanimoto as the 61-year-old male patient suspected of starting a fire at a mental clinic in Osaka two days earlier that killed 24 people.

Tanimoto, who remains in a serious condition as a result of carbon monoxide poisoning, was among 27 people taken to hospitals after the fire raced through the clinic in a multiple tenant building in the western Japan city on Friday.

Tanimoto, known as a skilled construction sheet metal worker, was employed at an Osaka factory until 2010. A daily work log he left behind in his last year on the job paints him as a hardworking individual. 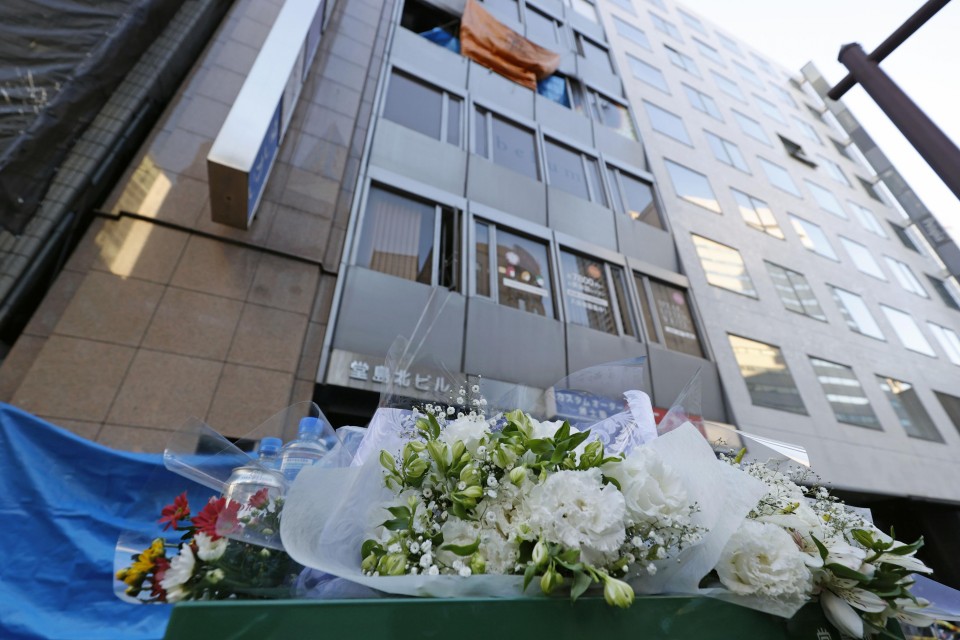 Flowers are seen in front of a building in Osaka on Dec. 18, 2021, where a deadly fire broke out on the fourth floor a day earlier. (Kyodo)

"If he couldn't finish his work on time, he would come to the factory even on Sundays to work. That was how seriously he took it," said the company's president.

According to the president, Tanimoto entered his company in 2002 after working for his father who ran another sheet metal factory. He left suddenly in 2008 but asked to be employed again the following year.

Around a year later, he quit again for unknown reasons and the company lost contact with him.

In April 2011, Tanimoto was arrested on suspicion of attempted murder after stabbing his son in the head with a kitchen knife.

The president's wife, who was shocked by the news that Tanimoto was the suspected arsonist, said, "While with us, he was hardworking and did not do any bad things."

Fourteen of the victims have been identified including the clinic's director Kotaro Nishizawa, 49, the police said.

The police continued to inspect the scene on the fourth floor of the building in Osaka's Kita Ward on Sunday and are investigating whether there was any trouble between the suspect and the clinic.

According to investigative sources, Tanimoto was identified from security camera footage taken within the psychosomatic and psychiatric clinic where the fire started around 10:15 a.m. Friday. The police have found his registration card for the clinic.

The police have quoted witnesses as saying that the suspect placed a paper bag near a heater in the clinic's reception area. He then kicked the bag, igniting the fire when liquid flowed out.

The camera footage showed the suspect moving his hand as he was crouching, according to the sources. A burnt cigarette lighter was found where the fire apparently started.

The security camera also recorded Tanimoto heading toward the examination room at the back of the clinic carrying two cans of what appeared to be tear gas after the fire started, the sources said.

On Friday, the clinic was scheduled to hold a group session for patients on temporary sick leave to help them return to work. Some of the victims may have been there to attend the session.