The ISU Grand Prix of Figure Skating Final will be canceled due to the emergence of the Omicron variant of the coronavirus, the Japan Skating Federation announced Thursday, in a move that will likely have repercussions throughout the world of sports.

The Grand Prix Final, featuring the top-six points-earners in each discipline from six Grand Prix meets, is the sport's second-most prestigious annual event, behind only the world championships. 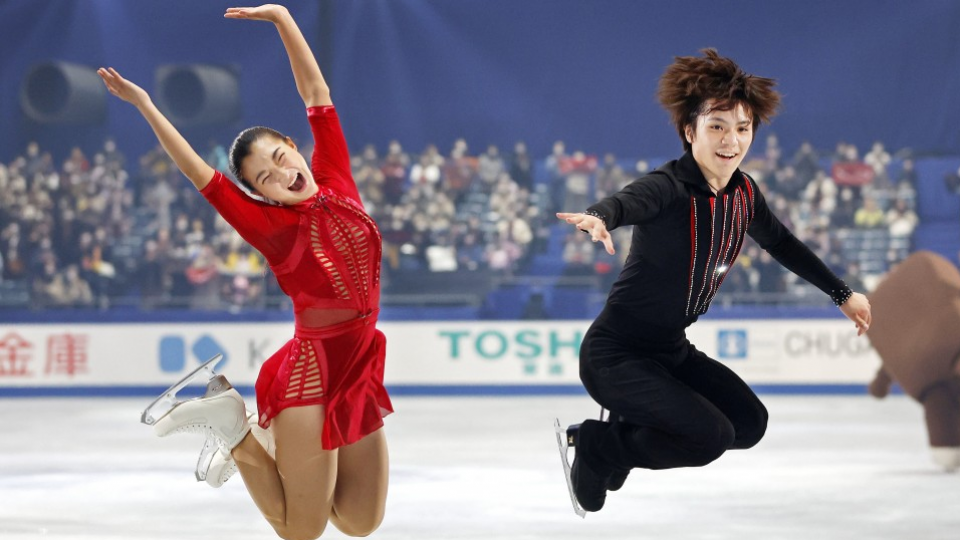 NHK Trophy winners Shoma Uno (R) and Kaori Sakamoto, both of Japan, jump at the finale of the exhibition gala at Yoyogi National Gymnasium in Tokyo on Nov. 14, 2021. (Kyodo) ==Kyodo

It was scheduled to take place in Osaka Prefecture between Dec. 9 and Dec. 11 and serve as a tune-up for the Beijing Olympics in February, and was to be one of the events used to select members for Japan's Olympic team.

The Japanese government implemented strict border controls on Tuesday in an attempt to stop the Omicron variant from entering by banning the entry of non-resident foreign nationals.

A total of 172 coaches and athletes, including American Nathan Chen, the three-time defending men's world champion and record-scoring 15-year-old Russian women's skater Kamila Valieva, were expected to take part in the event.

Five Japanese skaters in three disciplines were on the rosters that were set following last week's Rostelecom Cup, the final competition of the 2021 Grand Prix Series. Russia claimed a total of 11 places across the four disciplines.

Last year's Grand Prix Final in Beijing was also canceled due to the coronavirus pandemic.

The International Skate Union announced it is looking into the possibility of holding an alternate event at the end of the season.