The Japanese Embassy in Washington is featuring chefs at renowned U.S. restaurants in promotional videos aiming to boost exports of Japan-made agricultural products, adding to its ongoing series as the coronavirus pandemic continues to prevent large gatherings.

As the COVID-19 outbreak intensified in the United States last year, the embassy produced promotional videos focusing on Japanese wagyu beef. This year's videos are centered on the theme of Japanese rice.

In the video series, chefs at Michelin-starred restaurants in New York and Washington discuss the uses and benefits of agricultural products cultivated in Japan, while demonstrating artful preparation and presentation of Japanese dishes. 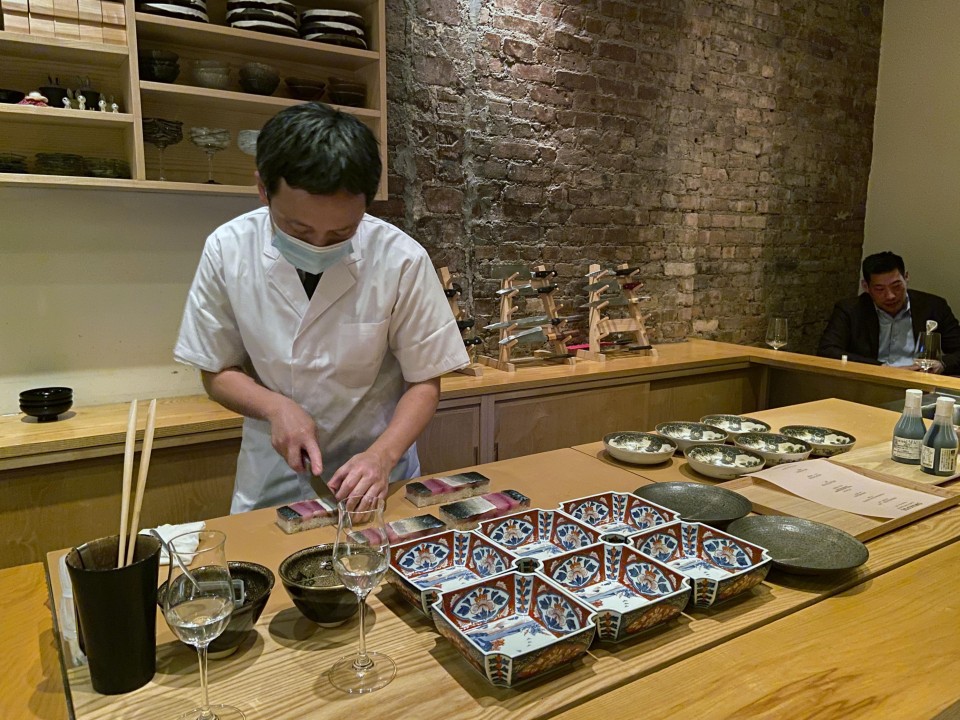 Chef Hirohisa Hayashi demonstrates his skills at an event held to convey the appeal of Japanese ingredients at his restaurant Hirohisa in New York on Dec. 6, 2021. (Kyodo)

On Monday, an in-person event was held at the Japanese restaurant Hirohisa in New York to recreate one of the cooking scenes introduced in the videos. Owner-chef Hirohisa Hayashi, 45, presented a full-course dinner featuring several brands of rice harvested in his native prefecture of Fukui in central Japan.

The dishes prepared by Hayashi included roasted sea bream with a starchy sauce made with rice powder, rod-shaped sushi topped with mackerel and assorted sashimi served with pure-rice soy sauce.

Japan-made rice is known for containing more moisture than rice from other locations. 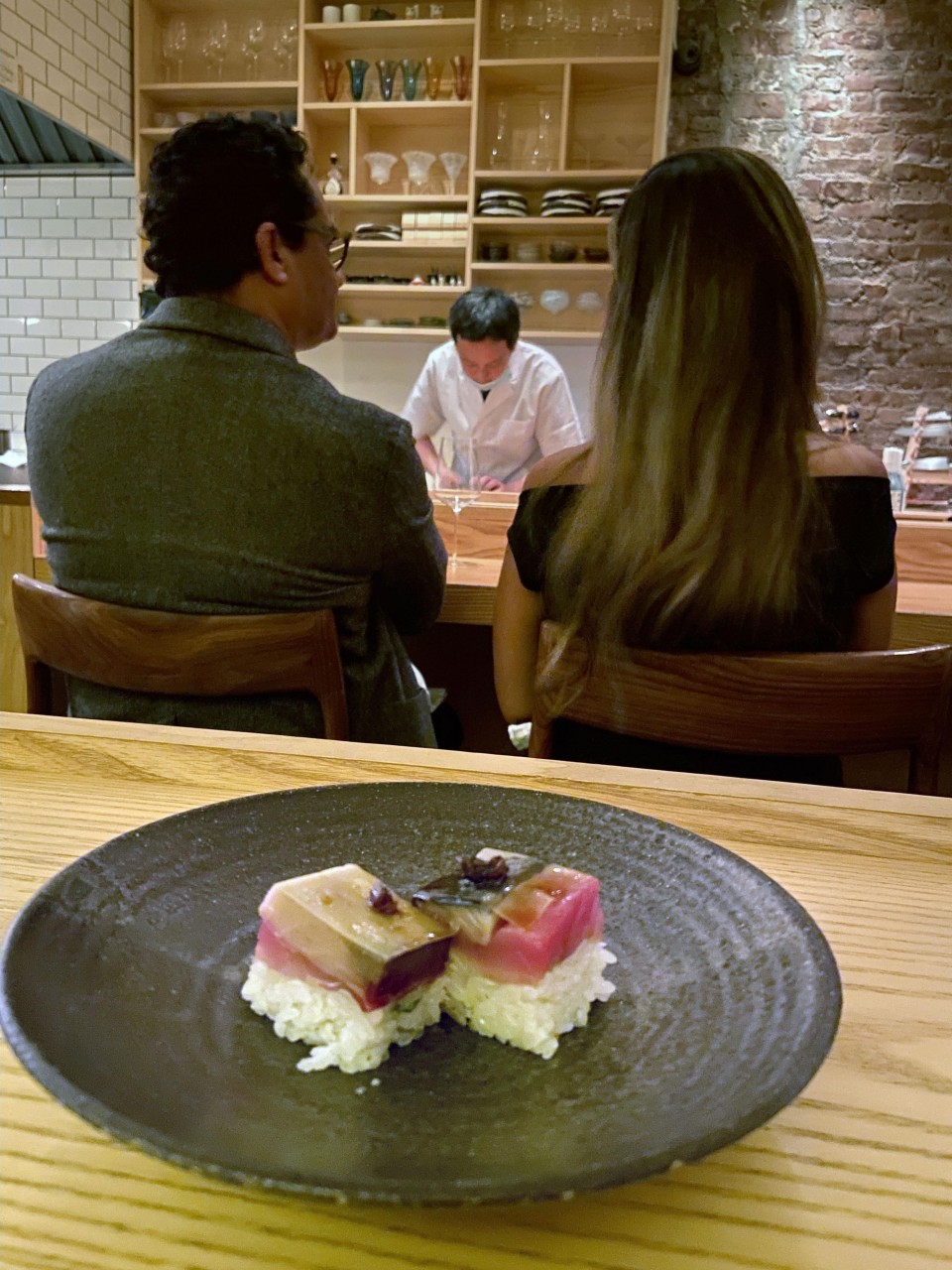 Mackerel stick sushi is served at an event held to convey the appeal of Japanese ingredients in New York on Dec. 6 2021. (Kyodo)

"Japanese rice tastes good even when it gets cold because it keeps its sticky texture," Hayashi said.

Laurent Gras, a French-born chef who appeared in one of the wagyu videos last year, was among around 15 guests at the restaurant on Monday.

After the demonstration, Gras said he was "very lucky to see what you can do with rice." 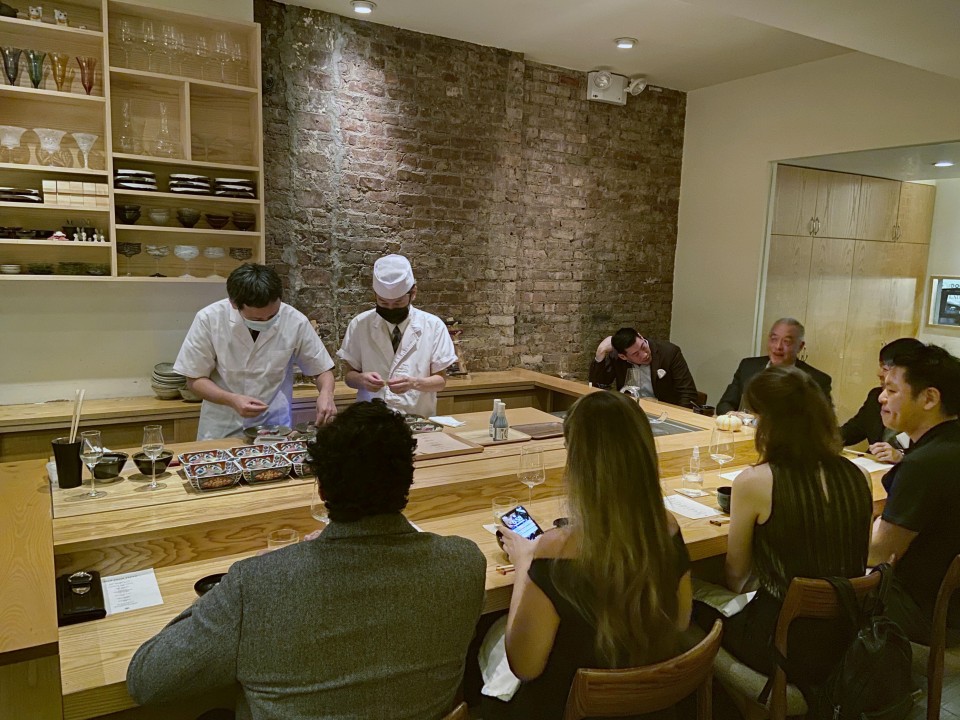 An event to covey the appeal of Japanese ingredients is held at Japanese restaurant Hirohisa in New York on Dec. 6, 2021. (Kyodo)

Amid the booming popularity of Japanese food overseas, the Japanese government is keen to boost exports of domestic agriculture, forestry and seafood products, setting its sights on 2 trillion yen ($17.6 billion) in exports in 2025 and 5 trillion yen in 2030.

Exports of Japanese farm products are projected to surpass 1 trillion yen this year for the first time, according to the farm ministry.