While affirming the need for Japan to play its part in international coordination to deter China from attempting to seize Taiwan and control the South China Sea, as well as curb North Korea's nuclear and missile development, Sven Saaler, a professor of modern Japanese history at Sophia University in Tokyo, questions the rationale behind calls in the LDP to double Japan's defense spending to 2 percent of gross domestic product.

"Just like Germany, Japan faces the demand to raise its defense budget to 2 percent of GDP. What that would entail, however, is not clear at all," Saaler said in an interview via email, in reference to perceived pressure from the United States on the two allies to contribute more to the security of their respective regions. 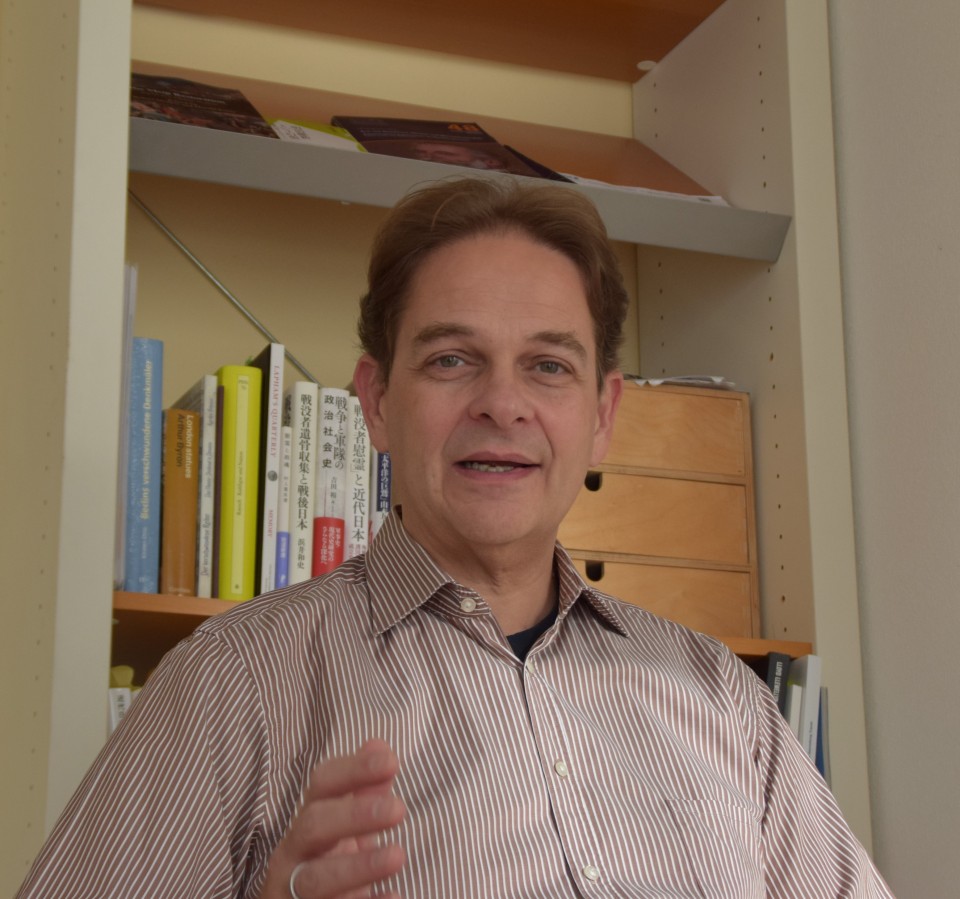 Sven Saaler, a professor of modern Japanese history at Sophia University in Tokyo, speaks in an interview via email from Frankfurt, Germany, where he is currently on a sabbatical leave. (Photo courtesy of Sven Saaler)(Kyodo)

"Would Japan be more secure after doubling its military budget? Most likely not, even though the alliance with the United States might be strengthened," Saaler wrote from Frankfurt, Germany, where he is currently on a sabbatical leave.

Proponents of Japan acquiring strike capabilities cite progress in development by China and North Korea of sophisticated missiles that are increasingly difficult to intercept. But Saaler said, "Whether any military show of force by Japan, or any country, will contribute to the solution of conflicts in the long term is, in my opinion, very doubtful."

He made the comments as Germany, along with Britain and France, expands security cooperation with Japan in the strategically and economically important Indo-Pacific, apparently to counter Beijing's military buildup and assertive territorial claims in the East and South China seas, which are seen a challenge to the rules-based regional order.

Vice Adm. Kay-Achim Schonbach, chief of the German Navy who visited Japan in early November with the frigate Bayern, the first German warship to dock in Japan in about 20 years, named Japan, Australia, South Korea, Singapore, New Zealand and the United States as key partners in promoting a free and open Indo-Pacific.

The issues of strike capabilities -- which Kishida has said is one of the options for bolstering missile defense -- and defense outlays will be the focus when the government revises the National Security Strategy, a 2013 document that presents medium to long-term guidelines for Japan's defense and foreign policies, possibly next year.

Saaler suggested Kishida, who took office in October, may have had to adopt a more hardline foreign and security policy so as to win support from the LDP's conservative forces led by former Prime Minister Shinzo Abe in the party's leadership election in September.

"During his term as foreign minister under Mr. Abe, Mr. Kishida's style definitely seemed to be much less confrontational and aggressive than that of Mr. Abe," said Saaler, who also serves as Japan representative of Friedrich-Ebert-Stiftung, a German foundation and think tank dedicated to promoting relations with other countries.

"However, the intra-party maneuverings that were necessary for Mr. Kishida to win the LDP presidential election seem to have taken a toll on his foreign policy approach," he said. "He has taken an affirmative stance toward the ideas of raising the defense budget and acquiring enemy base strike capabilities."

In a similar vein, the German scholar lamented Kishida's suggestion that amending the Constitution -- including adding a reference to the Self-Defense Forces in the war-renouncing Article 9 -- would be a major issue in a House of Councillors election slated for summer 2022.

During his nearly eight-year term as prime minister until September last year, Abe proposed adding a third paragraph to the article to recognize and legitimize the existence of the SDF, thus countering the claim by some scholars and others that the SDF are "unconstitutional" in the absence of a reference in the Constitution.

Referring to the concern that such a move could provoke South Korea and China, both of which suffered from Japan's wartime militarism, and the fact that the majority of Japanese do not regard the SDF as unconstitutional, Saaler sees no need for Tokyo to alter Article 9, saying it "is an important part of postwar Japan's politics of reconciliation."

"It is Japan's image as a peace state that makes the country so attractive for visitors, students and professionals of all kind," he said. "This is also why European politicians look toward Japan for cooperation, not because Japan might double its defense budget."