Japan's new criteria to assess the COVID-19 situation will shift focus more on hospital capacity rather than the number of new infections in line with the increase in the vaccination rate and fewer people falling seriously ill, government officials said Monday.

The new evaluation system, approved in a meeting of the government's subcommittee on the novel coronavirus response, will also classify the situation according to five levels, up from the current four, to forestall another wave of infections and a crunch on medical services.

The government has relied on such a scale when it examines whether to declare a state of emergency, while prefectural governments have used it in deciding on what kind of measures to take against the virus. 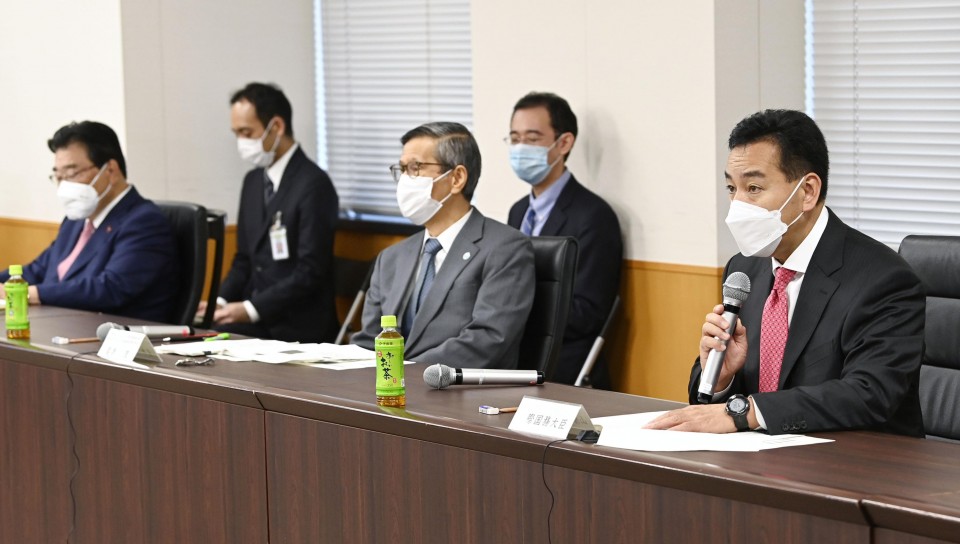 Economic revitalization minister Daishiro Yamagiwa (R) speaks at a meeting of the government's subcommittee on the coronavirus response on Nov. 8, 2021, in Tokyo. (Kyodo)

The upgraded system will incorporate a projection of hospital bed availability and try to forecast earlier whether there may be a serious strain on the country's medical system in the wake of a resurgence of infections.

It is expected to be included in a new package of measures against the virus, which the government will compile in the first half of November.

The government is also working to include a plan to allow third COVID-19 vaccine booster shots to be administered at workplaces in an effort to reduce the burden on local governments and increase availability, sources close to the matter said Monday.

A health ministry panel decided last month to make the booster shots available to all people who have gone at least eight months since receiving their second dose, with medical personnel and other at-risk groups expected to get theirs as early as December.

"Based on today's discussions, we would like to prepare for a potential resurgence of infections by assuming a worst case scenario," economic revitalization minister Daishiro Yamagiwa, who is in charge of the government's COVID-19 response, said at the meeting.

The move comes after a recent sharp fall in the number of serious COVID-19 patients in Japan with about 70 percent of the population now fully inoculated.

Nationwide coronavirus cases have also dropped significantly, with 107 reported on Monday compared with over 25,000 logged in the latter half of August in the fifth wave of infections.

Shigeru Omi, the country's top COVID-19 adviser who heads the subcommittee, said at a press conference that the new criteria were designed to "regain ordinary lives and economic activities."

As there has been concern over a possible sixth wave of infections this winter given that some other countries are struggling with an uptick in the number of new cases even with the progress in vaccinations, Omi said it is important to keep level 1 as much as possible.

"The situation (this summer) was that (people) died while waiting at home without being hospitalized. The biggest philosophy is not to repeat that situation," he said.

Under the five-phase scale of assessment, level zero means maintaining a situation of no new COVID-19 cases while level 1 signifies the health care system is able to respond to COVID-19 in a stable manner.

Level 2 warns that an increase in infections is beginning to put a strain on the system, while level 3 means the national hospital occupancy rate has gone above 50 percent and a state of emergency is needed. Level 4 signifies that hospitals are no longer able to deal with COVID-19 patients even if they reduce general medical services.

Currently, Stage 4 is the worst level on the government's four-point scale, with 25 or more weekly infection cases per 100,000 people, which has been a key criterion for the government to declare a state of emergency.