Japan on Tuesday banned new entries by foreigners globally for at least one month in an attempt to stave off the new Omicron variant of the novel coronavirus.

Additionally, 14 countries and regions, including Britain and Germany, were added to a list of places from which returning Japanese citizens and foreign residents will be subject to stricter quarantine requirements. 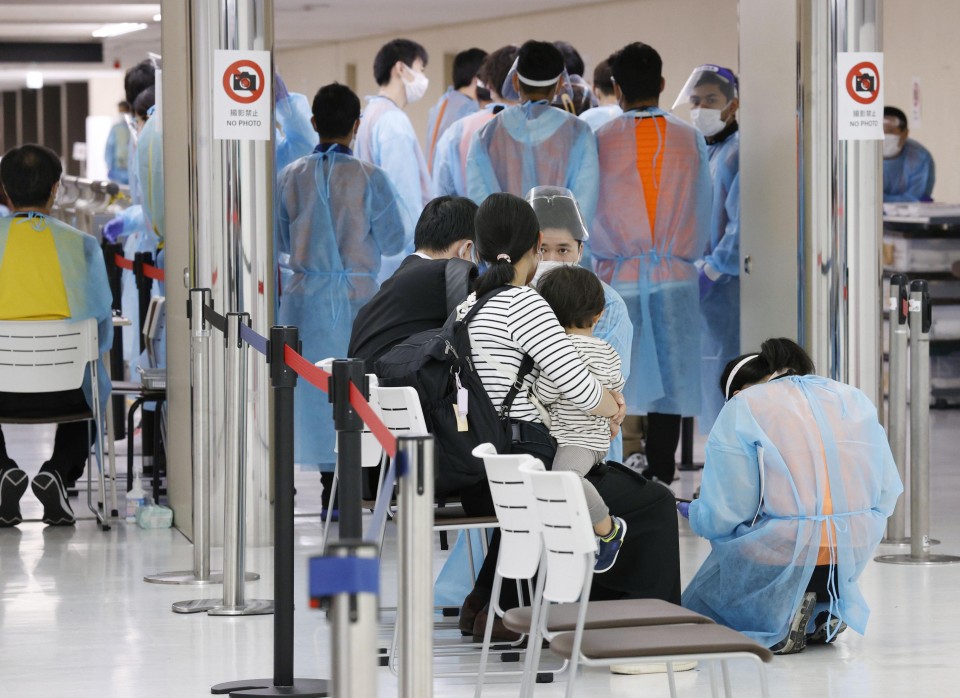 Travelers (C) arrive at Narita airport in Chiba Prefecture, near Tokyo, on an international flight on Nov. 29, 2021. Japanese Prime Minister Fumio Kishida said the same day the country will close its borders to new entries by foreigners the following day amid concern over the new Omicron variant of the novel coronavirus. (Kyodo) ==Kyodo

Japan had just eased its ban on new entries by foreigners on Nov. 8, allowing businesspeople, students and participants in its technical internship program to enter on condition that their host organizations agreed to monitor their activities.

Kishida said closing the border is a "temporary measure until information about the Omicron variant becomes clear," adding that "when dealing with an unknown risk, it's best to take every precaution."

Starting Wednesday, Japan will also lower its daily limit for the number of people arriving from 5,000 back down to 3,500. Returning Japanese citizens and foreign residents will be required to isolate for two weeks, regardless of whether they are fully vaccinated.

Among the 14 countries and regions covered by the stricter quarantine requirements, travelers who have recently been to Angola will be required to spend the first 10 days of their isolation periods in government-designated facilities.

Travelers from Britain, Israel, Italy and the Netherlands will need to spend six days in government-designated facilities, while three days will be required of those from Australia, Austria, Belgium, the Canadian province of Ontario, the Czech Republic, Denmark, France, Germany and Hong Kong. 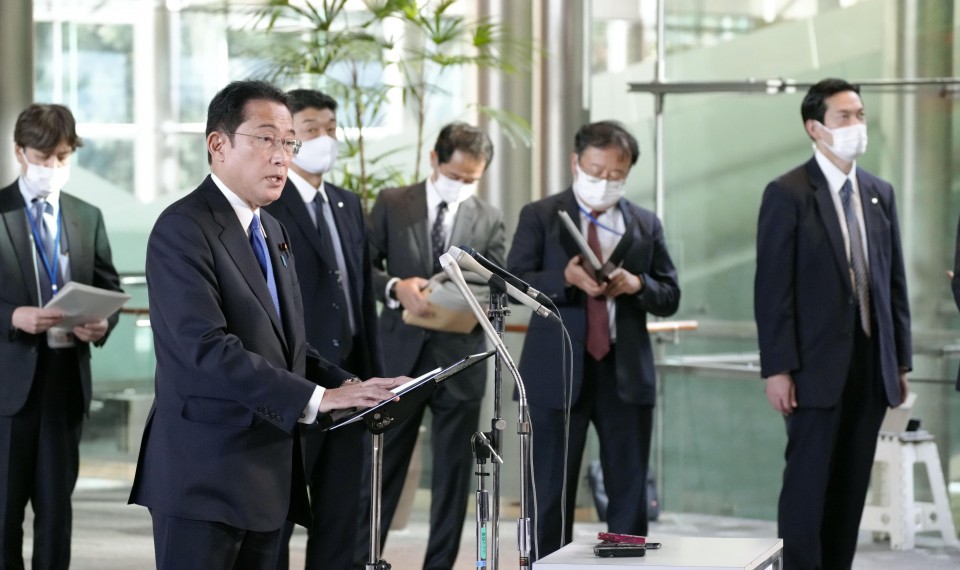 Japanese Prime Minister Fumio Kishida speaks to reporters at his office in Tokyo on Nov. 29, 2021, about border controls to keep out the new Omicron variant of the coronavirus. (Kyodo) ==Kyodo

A Foreign Ministry official said Japan's response to the Omicron variant is the most substantial among members of the Group of Seven countries.

Kishida, who spoke to reporters after discussing the measures with members of his Cabinet, revealed that a person who arrived from Namibia had tested positive for the coronavirus, and analysis to verify which variant the person is infected with is under way. He said it will take four to five days to obtain the result.

The man in his 30s arrived at Narita airport on Sunday, according to the health ministry.

Concerns are growing over the Omicron variant, which was first reported to the World Health Organization by South Africa last week and has since been confirmed in a growing number of countries. However, Japan has yet to detect a case.

The WHO has designated the strain a "variant of concern," warning it has a large number of mutations indicating it may be highly transmissible or pose an increased risk of reinfection to people who have previously caught the coronavirus.

The Geneva-based U.N. agency warned its 194 member states on Sunday that the Omicron variant is likely to spread globally, and the danger it poses is very great.

While it is unclear whether existing vaccines are effective against the variant, Kishida said the government will carry on with its plan to begin administering booster shots later this week while looking to health experts to provide additional data.

The emergence of the variant comes as Japan has seen a sharp fall in the number of new COVID-19 cases for about a month, and Kishida is aiming to restart economic activity that has been restricted by the pandemic.

On Monday, Japan's confirmed new COVID-19 cases totaled only 82, in stark contrast with many other countries battling surging infections.

But the discovery of the new variant could hold up plans to restart the Japanese government's "Go To Travel" program, meant to shore up the domestic tourism sector. 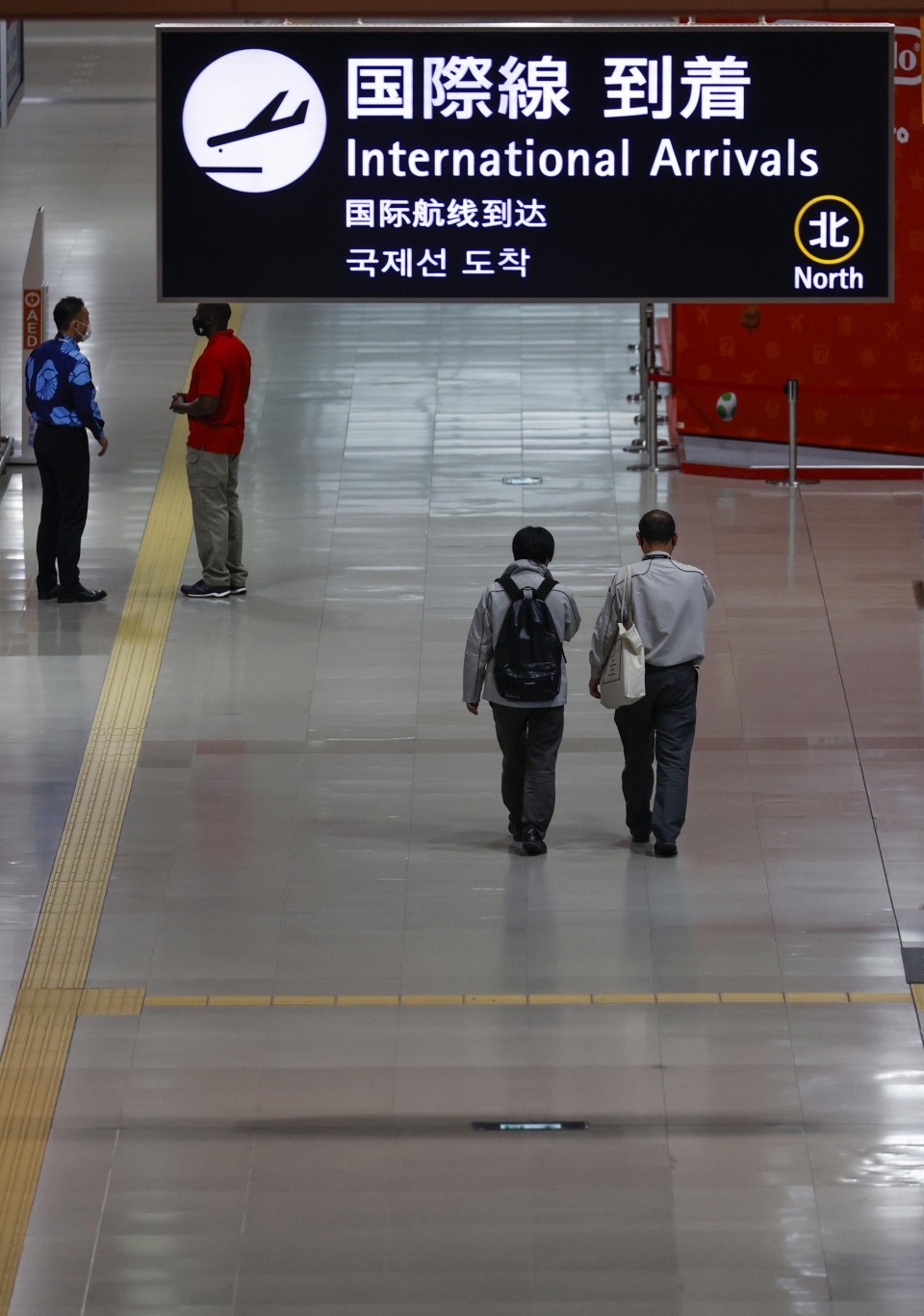 Photo shows an arrival lobby for international flights at Kansai airport in Osaka Prefecture, western Japan, on Nov. 29, 2021. Japanese Prime Minister Fumio Kishida said the same day the country will close its borders to new entries by foreigners the following day amid concern over the new Omicron variant of the novel coronavirus. (Kyodo) ==Kyodo