Sumo: Lone yokozuna Terunofuji hangs in against Daieisho on Day 2

Lone yokozuna Terunofuji had to dig deep Monday to stay undefeated at the Kyushu Grand Sumo Tournament, overcoming dangerous No. 1 maegashira Daieisho with a reversal at the edge of the ring. 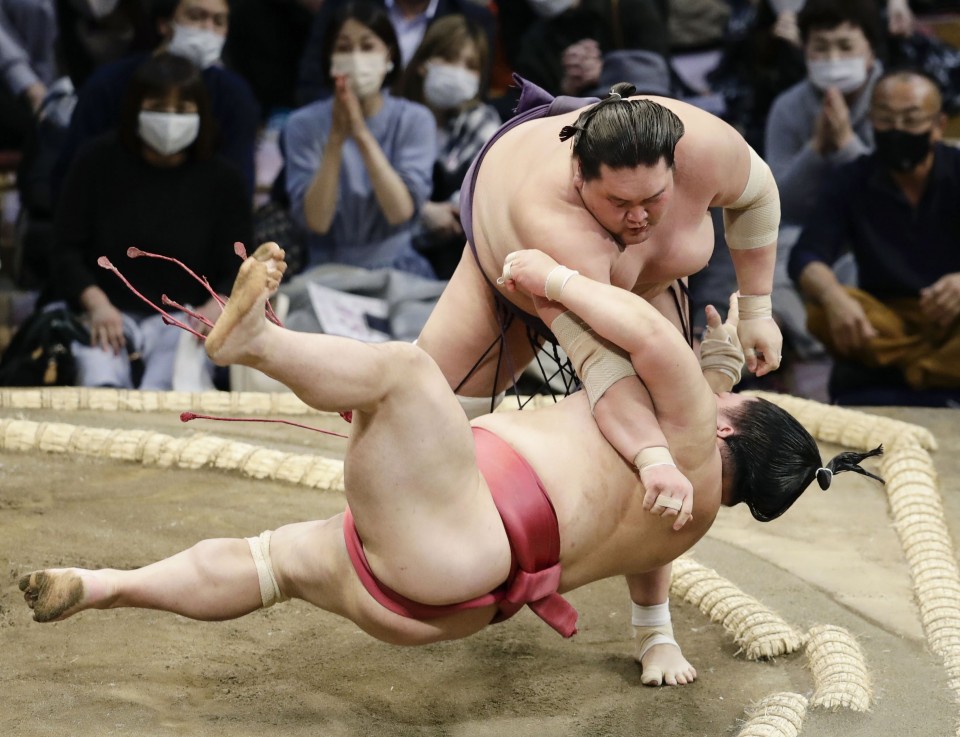 The 29-year-old powerhouse needed his strength and composure again in the final bout of Day 2 at Fukuoka Kokusai Center, holding on for a gutsy victory after being pushed to the brink.

Looking for another upset after stunning Terunofuji at the September tournament, Daieisho (1-1) weathered the yokozuna's opening attack and drove him back to the straw.

Teetering on one foot at the edge, Terunofuji kept his balance and twisted Daieisho sideways, giving himself enough room to execute a superb beltless arm throw.

The Mongolian-born Terunofuji, who took Japanese citizenship this year, is aiming for his sixth Emperor's Cup and fifth since his remarkable return to the elite makuuchi division in July 2020, after illness and multiple knee injuries saw him plummet down the rankings.

Following a powerful opening hit, Takakeisho quickly thrust Onosho (0-2) back and over the edge in his trademark fashion.

Having battled through a neck injury as a demotion-threatened "kadoban" ozeki in September, the two-time grand tournament winner has made an impressive start to the 15-day meet in Fukuoka.

Ozeki Shodai bounced back from his opening-day loss to Daieisho with a one-sided victory over one of his most troublesome opponents, giant komusubi Ichinojo.

Wrapping up the 190-centimeter, 206-kilogram Ichinojo after the opening clash, Shodai forced him out to improve to 4-10 in their head-to-head bouts.

Sekiwake Mitakeumi overcame a sluggish start against No. 2 Takanosho to advance to 2-0 with a push out.

Takanosho (1-1) was strong off the mark and forced Mitakeumi to the edge, but the two-time Emperor's Cup winner stood firm and spun his opponent around before shoving him out.

Driving his opponent back from the jump, Meisei could not capitalize on the momentum, losing his footing and allowing Wakatakakage to wrench him to the clay.

Komusubi Kiribayama dropped to 0-2 after succumbing to No. 3 Okinoumi (1-1) by force out.

Former komusubi Abi (2-0) notched another win in his first meet back in the makuuchi division following a three-tournament suspension for breaching the Japan Sumo Association's coronavirus safety rules. Fighting as a No. 15, he thrust out No. 14 Chiyonokuni (1-1).