U.N. climate talks closed Saturday with an agreement on efforts to limit global temperature rise to 1.5 C above pre-industrial levels after a last-minute compromise on coal power.

Participants from nearly 200 countries also agreed that accelerated action is necessary this decade to address global greenhouse gas emissions, as they wrapped up the nearly two-week conference in Glasgow, which was extended by one day. 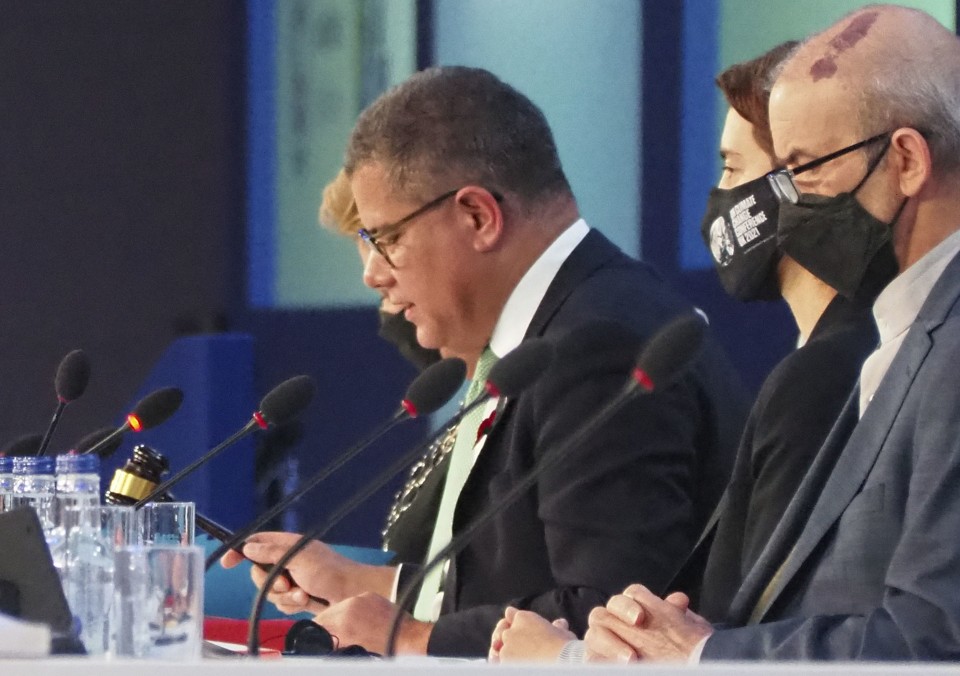 The agreement at the climate talks, known as COP26, was reached after India and other coal-reliant countries raised objections in last-minute negotiations, which watered down language to a commitment to the "phase-down" of coal power instead of "phase-out."

Alok Sharma, the president of COP26, said that confining temperature increase to 1.5 C above preindustrial levels is "a historic agreement" as it had been a major goal when Britain took on the role of the presidency-designate two years ago.

Japanese Environment Minister Tsuyoshi Yamaguchi, who attended the talks, said his country will maintain its policy of using coal power, though it will continue to promote the development of technology to reduce carbon emissions and "prioritize renewable energy as the main power source."

Japan has become more reliant on coal power after suspending nuclear power plants following the Fukushima nuclear disaster in 2011. It plans to generate 20 percent of total nationwide power through coal in fiscal 2030, in contrast to European countries' shift away from coal power.

Swedish climate activist Greta Thunberg, who has urged world leaders to take immediate and drastic actions, tweeted, "The #COP26 is over. Here's a brief summary: Blah, blah, blah," adding, "the real work continues outside these halls."

The 2015 Paris accord sets out a global framework to avoid the most dangerous impacts of climate change by limiting global warming to "well below" 2 C, preferably to 1.5 C, compared with levels before the Industrial Revolution.

One of the goals of the COP26, the 26th session of the Conference of the Parties to the United Nations Framework Convention on Climate Change, was to keep alive the goal of limiting global warming to 1.5 C.

The participating countries must also review and strengthen their emissions-cut targets for 2030 by the end of 2022 under their agreement.