Despite Japan's governing coalition retaining a comfortable majority in the powerful lower house in Sunday's election, Prime Minister Fumio Kishida's leadership will be tested ahead of an upper house election next year with his party's No. 2 leader suffering an embarrassing defeat in a constituency race.

For Kishida, who only became prime minister on Oct. 4 and entered the race with a lackluster initial Cabinet approval rate of about 55 percent, his Liberal Democratic Party winning 261 seats in the 465-seat lower chamber was a clear mandate, particularly as he had set the line of victory as winning a majority together with the LDP's junior coalition partner Komeito.

Sunday's House of Representatives election was held at a time when the number of new coronavirus cases in the country has significantly fallen in recent weeks, a development analysts cite as a factor for Kishida remaining in power and the LDP losing a smaller-than-expected number of seats in the lower chamber. 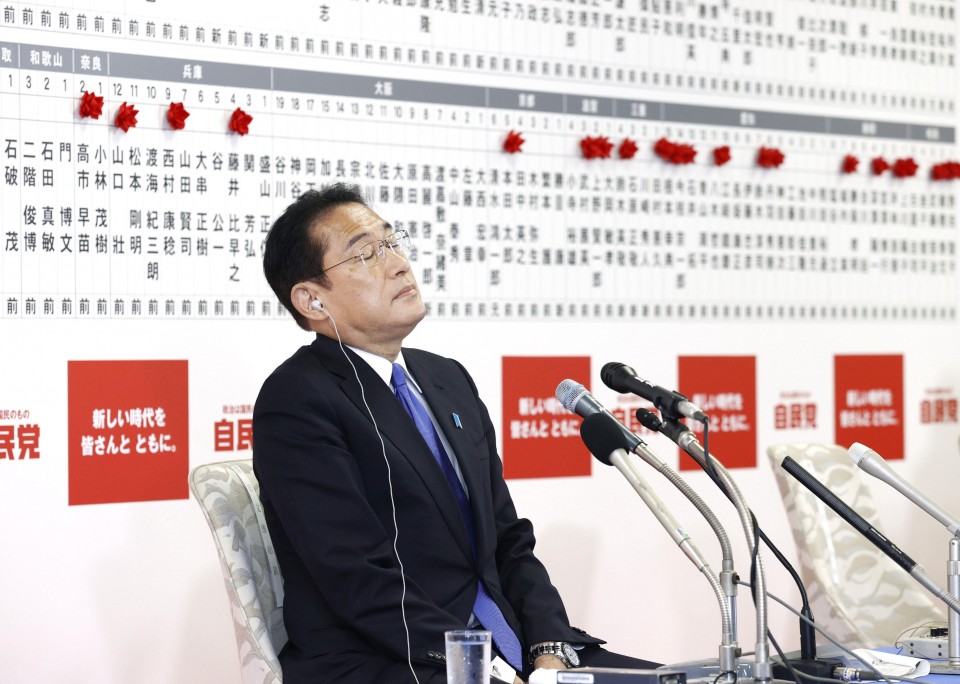 Japanese Prime Minister Fumio Kishida is pictured during a TV interview at the Liberal Democratic Party's headquarters in Tokyo on Oct. 31, 2021, following the day's House of Representatives election. (Kyodo) ==Kyodo

"The pandemic has receded, vaccinations have progressed, and economic activities are returning to normal, so people are beginning to feel they are okay to keep things as is," said Naoto Nonaka, a professor of comparative politics at Gakushuin University.

Nonaka was referring to the fact that more than 70 percent of Japan's population are now fully inoculated against COVID-19, and that restrictions on eateries have been entirely lifted following months of state of emergencies under the unpopular previous government of Yoshihide Suga.

"Those who had been considering switching their support from the LDP (to opposition parties) have apparently returned to the ruling party," Nonaka said, in reference to the 259 seats the LDP won, down from the preelection level of 276. The LDP endorsed two independents after the election, bringing the total number of its seats to 261.

The race also came ahead of next summer's election of the House of Councillors, the upper chamber the LDP-Komeito bloc also controls.

"The lower house election's outcome was an indicator as to whether the LDP can win next summer," said Koji Nakakita, a professor of Japanese politics at Hitotsubashi University.

The result was particularly important for Kishida -- the face of the LDP -- as the upper house election is expected to be a harder battle for his party with a greater chance of it losing its majority, according to Nakakita.

"The LDP winning more than a majority on its own means Mr. Kishida and his government were endorsed as they are," he said. "So they will now try to show originality in coronavirus, economics and other policies before heading into the upper house election."

The LDP's victory was not all plain sailing, however, as the party did lose some seats and Kishida is likely to lose LDP Secretary General Akira Amari.

Amari was defeated in a single-seat constituency race by Hideshi Futori of the main opposition Constitutional Democratic Party of Japan as the opposition parties jointly threw their support behind him. Amari said he intends to step down from the party's No. 2 post.

The appointment of the veteran lawmaker to the key LDP post was controversial from the start, however, as the former economic and fiscal policy minister from December 2012 responsible for promoting the "Abenomics" policy mix and the 2015 signing of the Trans-Pacific Partnership free trade agreement resigned in January 2016 amid graft allegations.

The opposition parties, for their part, are expected to face tougher challenges ahead of next year's election.

The lower house election was also an important measure for the CDPJ and other opposition forces to find out whether their tactic of joining forces and throwing support behind a single candidate in competitive constituencies is an effective counter against the ruling coalition.

The alliance was of an unprecedented scale, with the CDPJ, the Japanese Communist Party, the Democratic Party for the People, the Social Democratic Party and Reiwa Shinsengumi backing the same candidates in over 70 percent of the 289 constituency contests.

It marked a major turning point as opposition parties have traditionally each fielded their own candidates in single-seat districts, meaning voters critical of the government were split among several choices, giving an advantage to the LDP and Komeito.

"Our strategy produced certain results," CDPJ leader Yukio Edano said in an NHK program as Amari and some other LDP heavyweights were defeated by candidates backed by a united opposition in single-seat constituencies.

"The CDPJ losing seats raises the view that the strategy this round was a failure, and there will be discussions that maybe it was wrong to have joined hands with the JCP," said Nonaka.

As the two parties have different stances on foreign and security policy, with the CDPJ seeking to maintain a healthy Japan-U.S. alliance while the JCP calls for scrapping the security treaty between Tokyo and Washington, the ruling coalition has repeatedly criticized the CDPJ-JCP tie-up as an "illicit union."

But Nonaka said rather than the tie-ups, the real issue lies in the CDPJ's slowness in releasing election pledges and sharing its vision to be recognized as an alternative for voters critical of the Kishida government.

Nakakita said the outcome will raise questions about the CDPJ leadership of Edano, who apologized Monday for the loss of party seats in the lower house election.

"The outlook of a change of government is completely lost now, and there will be moves seeking to replace CDPJ executives," Nakakita said.