The original "King of the Monsters" graced the big screen like never before during a recent world premiere of the 4K restoration of the first "Godzilla" film in Los Angeles.

The highly anticipated remaster debuted to celebrate the 67th birthday of the pop culture icon, the star of the world's longest-running movie franchise. Similar screenings were held at over two dozen locations across the United States, including San Francisco and New York City.

Directed by Ishiro Honda, a pioneer of Japan's "kaiju" (strange beast) genre of films and television, and released by Toho Co., "Godzilla" tells the story of a giant prehistoric monster that rampages throughout Japan after being driven out of the ocean depths by underwater hydrogen bomb testing. 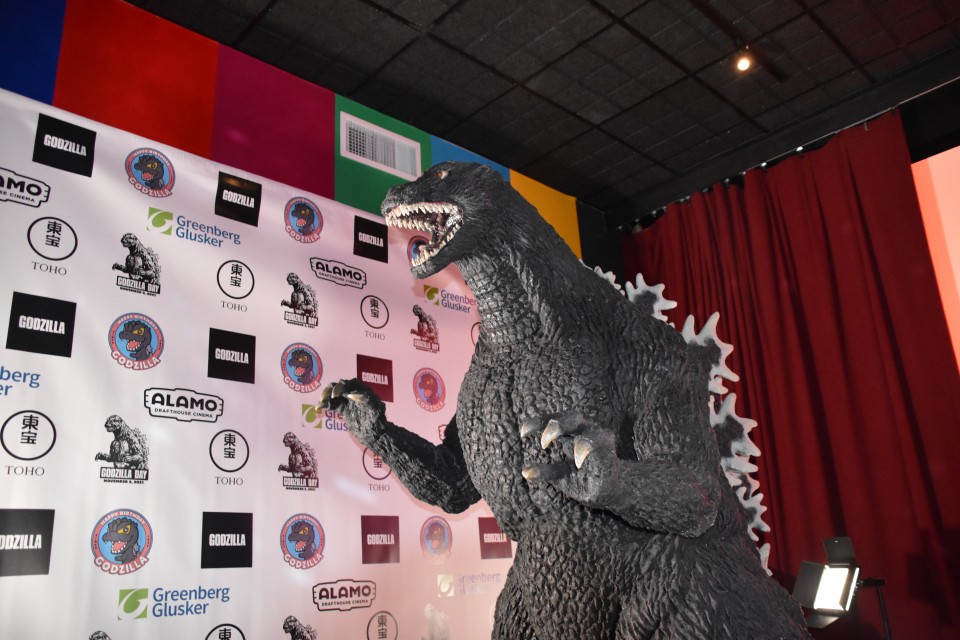 A model of Godzilla greets visitors at the premiere of the 4K restoration of the 1954 film "Godzilla" at the Alamo Drafthouse Cinema on Nov. 3, 2021, in Los Angeles. (Kyodo)

When first released in 1954, the motion picture immediately resonated with Japanese audiences with its symbolic depiction of the destructive power of nuclear weapons and showcasing of the threat of radioactive fallout from hydrogen bomb tests such as the ones conducted by the United States over the Marshal Islands in the early years of the Cold War.

Godzilla historian Steve Ryfle explained to the Los Angeles crowd that the film's opening scene is an "unmistakable reference" to the tragedy known as the Lucky Dragon incident, in which an American thermonuclear test irradiated a Japanese tuna fishing boat at Bikini Atoll in March 1954. It also spoke to the destruction experienced by Japan during World War II.

"The experiences of the people in this movie, they mirror the experiences during wartime. Mass evacuations, daily life disrupted, people fleeing to the hills and watching helplessly as their city burns," said Ryfle, who was introduced by Toho and gave a short speech ahead of the Nov. 3 premiere at the Alamo Drafthouse Cinema in downtown Los Angeles.

"Godzilla is the unmistakable stand-in for the atomic bomb in this movie. It moves slowly across the city, destroying everything in its path and shows no mercy...The issue of nuclear weapons is at the heart of this movie."

Chris Mowry, a creative manager at Toho International Inc., said that in addition to the various iterations of the character and the sci-fi thrills, Godzilla has continued to enthrall fans by staying "relevant on a global scale" even as the issues of the day change.

"If you look through the history of the films, a lot of the filmmakers touched on certain political or environmental topics at the time," Mowry said. "I think the character itself has represented so many things as far as being a hero for Earth, a force of nature, the result of mankind's tampering with things."

"As (with) the first film, it's such an allegory for what we can do wrong. Godzilla should be seen almost like a warning, in a way. There's definitely a lesson to be learned in each film."

The character has been portrayed both as villain and hero in the 32 films produced by Toho, several animated television series, and four Hollywood films, including this year's "Godzilla vs. Kong," the fourth entry in the MonsterVerse franchise that pits the King of the Monsters against "King Kong," his American-born adversary. 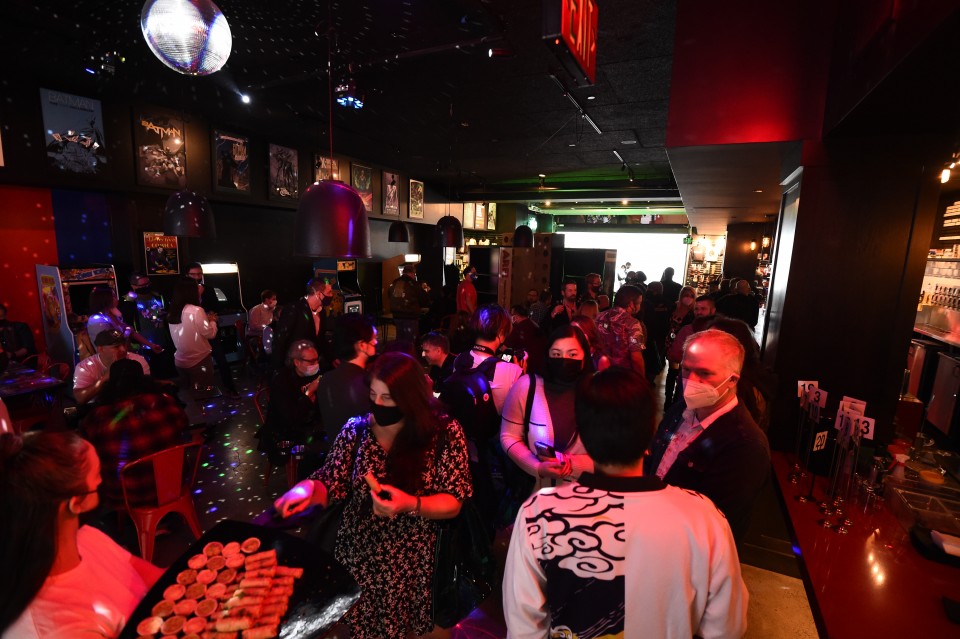 Visitors attend a cocktail reception before the premiere of the 4K restoration of the 1954 film "Godzilla" at the Alamo Drafthouse Cinema on Nov. 3, 2021, in Los Angeles. (Photo courtesy of Toho International Inc.)(Kyodo)

In association with Janus Films, the Austin, Texas-based Alamo Drafthouse Cinema chain plans to screen several more titles from the Japanese film series throughout November, including 1971's "Godzilla vs. Hedorah," 2016's "Shin Godzilla," and two classics from Japan's Heisei Era (1989-2019) that never made it to North American theaters.

Mowry said a 4K restoration of the 1954 film was "the next logical step" for Toho as the company combs through its archives and tries to introduce its films to new audiences.

Devoted fans and newcomers alike turned up early at the Los Angeles theater for a cocktail reception where they enjoyed Godzilla-themed appetizers and posed for photos with a towering replica of the birthday behemoth.

Andrew Wong, a YouTuber known as "GForever" and self-described lifelong Godzilla fan and collector, caught the show while on a trip from Boston and reminisced about a family tradition watching the series as a child.

"Every weekend my sister and I would watch Godzilla movies with my grandparents, so it was a nice connection with them, and I grew up just loving the movies," Wong said. "I think the films are just something very different, especially the older films. It's something that you don't really see in American cinema. And there's so many iterations of the character and meanings in the films."

A sobering appeal from Ryfle helped to set the audience's mood before the iconic shriek of the unseen protagonist sounded during the film's opening credits.

"Even though we love Godzilla for a lot of different reasons, and we celebrate him, and he makes us happy, I think it's worth looking back and realizing and remembering that this film is a story born out of the tragedy of war. Not only was Ishiro Honda a veteran, he was very much traumatized by his experiences during the war," said Ryfle, who co-authored a biography of the internationally successful director.

"The film is a commercial monster movie, of course, but it's very much also about the collective experience of the Japanese people during the war," Ryfle said. "The war may have ended nine years before, but the trauma was still being experienced. And that's very much palpable in this motion picture."